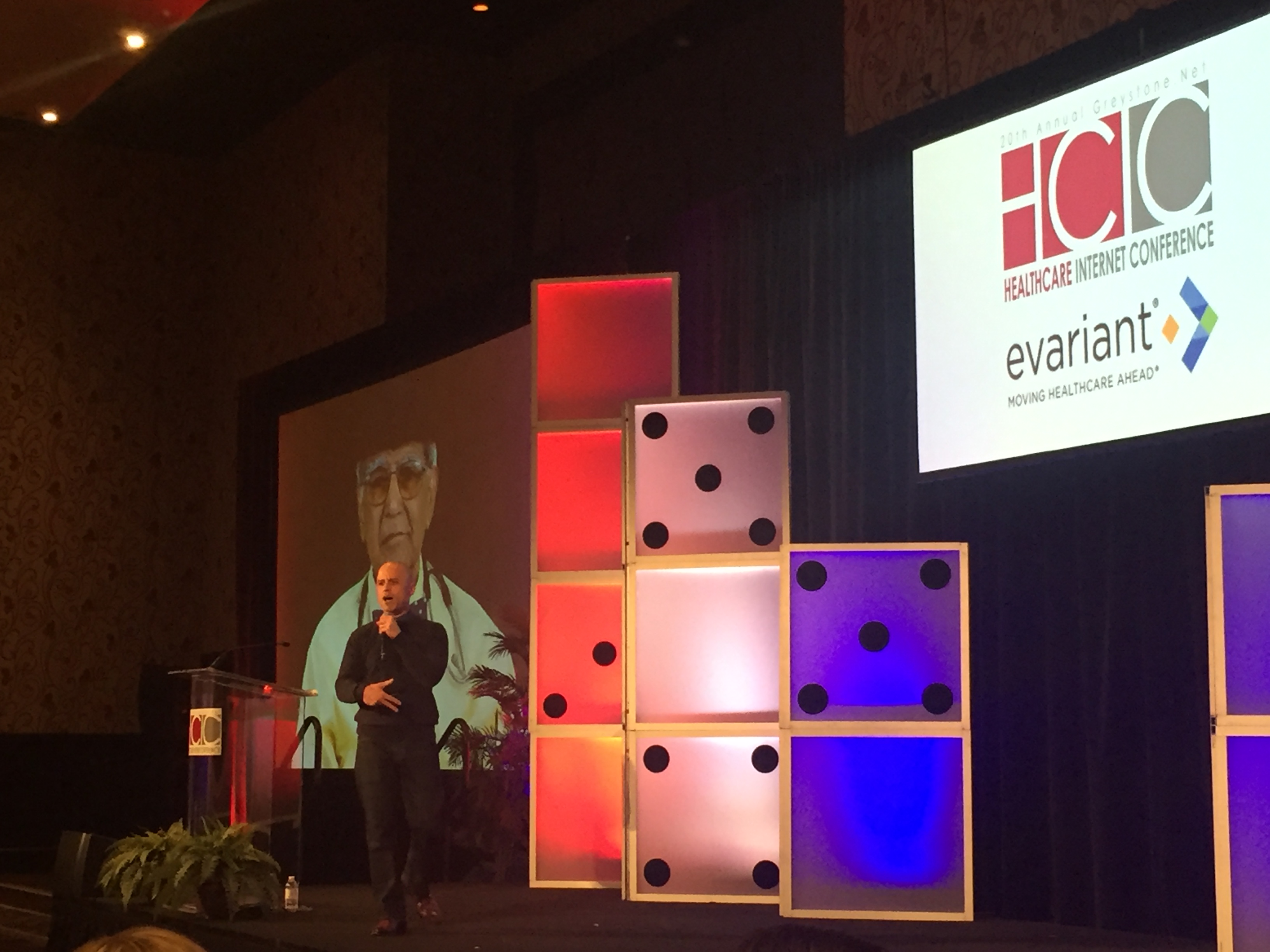 Zubin Damania, MD, was a Stanford physician who was following in his dad’s footsteps: Being a doctor in the typical healthcare system. But that wasn’t enough he told the audience at the Healthcare Internet Conference in Las Vegas in 2016. “I was living somebody else’s story.”

So he made changes. Huge ones. For him and the rest of us, too. The medical doctor started producing rap videos under the ZDoggMD name that were fun, but also educational. “Why two Gs?” he asked. “It’s more gangsta than one.”

Many people speak to the mind but not the heart, he explained, but to make a difference we have to speak to the heart. Humor can do do that and his videos are obviously very humorous.

This video, for example, reminded men, to check for prostate cancer and was played on repeat at a clinic, he said. “Men were left humming the song and, what’s even better, they remembered the importance of self-exams.

He was making a difference. One that was hard to measure even. Certainly, some measurements of exact impact can be hard to come by, but anecdotes are a measurement and we know the video reminded men to check for signs of prostate cancer. He knew of at least one case of where a man ended up with a cancer diagnosis. He caught it after the video reminded him to check!

During the keynote at the conference, ZDoggMD shared his story how he got to where he’s today and shared many of his fun, rap and educational videos. He was performing the vocals live from the stage while the video was playing.

I can already hear people say: “But Christoph, we can’t do that. We are bound by office politics, and rigid reporting structures. Leave alone that we can’t sing or produce videos like that.”

I can’t sing either, but there are some lessons all of us can learn from ZDoggMD. Here they are, broken down by topic:

Some structures and situations might prevent us from telling stories. He mentioned that he got push back from bosses, too, when he decided to share stories like this. So, he decided to start publishing under the new name. (Keep in mind, though, that nothing online is really private and he now has a huge audience, so the “private” factor is certainly gone.)

We can play within those structures or we can break out of them and create our own. Of course, sometimes leaving those structures is the only way to actually tell the stories that need to be told. That’s why some of the best storytellers only report to themselves and their audiences.

“Telling stories that push boundaries can cost us jobs and get us jobs.” @ctrappe

I remember talking to a mentor CEO a few years ago. I was just starting to push the boundaries of authentic storytelling more and and more. He said something to this effect: “That’s all great, Christoph, but you aren’t sharing complete stories either. You are playing within the system. You share save stories only.”

Very true. I was barely scratching the surface. That was a few years ago. We learn as we go and my own community is fairly accepting of my stories – good and bad – nowadays. It’s now what I do. Me sharing stories is somewhat expected.

ZDoggMD has a mission. He’s remixing primary care and educating the public through his memorable videos. I hear his and other people’s complaints about how primary care can be improved and isn’t where it can and should be. Personally, I think my own primary care physician is fantastic, transparent and I have no complaints other than that his website isn’t very good. I can’t even schedule an appointment on there. It would be nice if that gets updated, but everything else being so positive makes up for that problem – for now.

Hearing ZDoggMD’s mission of educating and improving is meaninful. He also founded Turntable Health, which is trying new ways to innovate in primary care. (I wouldn’t be surprised to see a franchise system here in the coming years.)

Lame voices are, well, lame. So are stiff ones. Or ones too formal.

I once had a chairperson tell me that the Board of Directors I was about to present to was expecting my presentation to be formal. Ugh. But, this story and change management project doesn’t fit into those voices and tones. I still told my story in my usual voice but adjusted it some to fit the audience.

Find your voice. The real one. Not that fake, third-person, kind of voice that you want to sound like. Use yours. Live it and stories will be even better.

The medium depends on our strengths. Some of us are better writers. Some rock the podcasts and some can produce music videos like the doc. Find your strength and go with that. Don’t force the writing thing if you aren’t a writer.  Pick the channel that works.

He’s creative, can rap and looks great on camera. That might not work for all of us, but it does for him.

He says he does Facebook Live broadcasts regularly and his YouTube videos come out on a regular basis. He also posts them on Facebook, because they take off there. Getting on a schedule is important – especially when we have content that is actually worth consuming.

It’s obvious that people are watching and sharing. Many are likely learning, too. He has many anecdotes of that. I know some people discount anecdotes as not evidence that something is having an impact. But they count and can be powerful!

He published this end-of-life video:

As soon as he did, his dad called: “I don’t think we’ve discussed my wishes.” Now they have!

Powerful! It made me tear up and I’m going to ask my mom about her wishes now. And my wife. Sounds like impact to me!

Standing out in a memorable way while sharing our expertise can be a meaningful way to making an impact. It’s a fairly simple formula:

It’s certainly easier said than done, but everyone is an expert in something. Share it in a way that stands out. That may mean to cut the lame PowerPoint presentation. Or it means to use less markety-language while sharing stories.

Standing out is hard because many of us are trained to fit in. But doing it for the greater impact is super meaningful.

Here’s to everyone getting and taking the chance to complete the journey to greater impact.