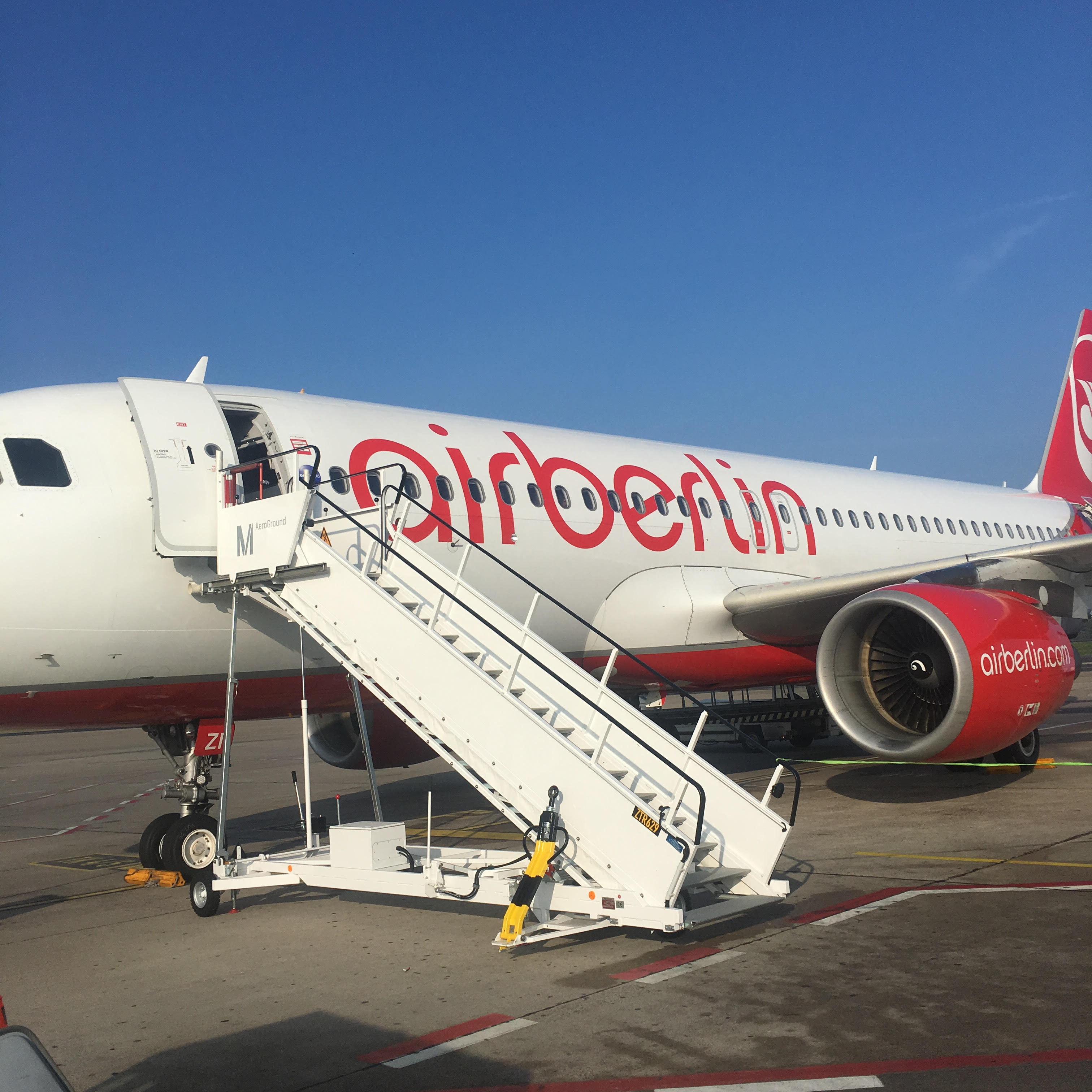 I was in Berlin for a keynote on behalf of ScribbleLive about two weeks before the announced shut down date of Air Berlin, the German airline company that declared bankruptcy in August 2017.

So I had a round trip from my home base in Cedar Rapids, Iowa, to USA, to Berlin and since staying Saturday nights cuts a lot off the ticket cost I arrived in Berlin on a Saturday night for a Monday keynote. On Sunday, I thought I’d go hop over to Düsseldorf to visit my mom for a few hours.

I ended up booking a 5-hour turn on Air Berlin for schedule, cost and because I could earn some minimal points on them toward my American Airlines balance.

And then I started wondering if I should be regretting that already. There was just so much negative news about the shut down.

“I even heard about it,” said my mom.

But I wanted to go see her – even if just for a few hours. So, I looked for other alternatives – just in case the return flight to Berlin was cancelled. Here’s my plan:

So there was the plan. I only cared about the return. If the Berlin to Düsseldorf flight was to be cancelled I would just stay in Berlin.

I added the flights to my FlightView app to track schedules, too. Everything seemed to be on schedule. Good!

When I got to the Berlin airport I printed my boarding pass at the desk. I always do that even when I have it on my phone. I’ve seen way too many people who have had trouble with one version or the other. So options are nice.

I asked if everything was flying?

“We are from here. I can’t tell you back from Düsseldorf.”

Ugh. That’s not promising. So I rephrased: “Do there appear to be any problems?”

Okay. Good enough and off to the gate. There was no plane at the gate …. but I was a bit early so I went to the Air Berlin Lounge. My American Airlines status got me in there.

A nice and sunny little lounge. Only me there, which might just be because it was a Sunday morning.

It was a bit of a walk back to my plane and once I got closer it looked like there was now a plane. Whew.

We boarded and everything was fine and we got to Düsseldorf but there were no chocolate hearts handed out as we deplaned, which used to be a thing they did at Air Berlin.

I spent some time In Düsseldorf and the weather was surprisingly pleasant for this time of the year.

The alerts for flying cancellations stayed quiet on the phone and everything seemed fine and then when I got to the gate at boarding time the gate looked like this:

Oh shoot. And now what? Wrong gate? No plane? Something else?

Turns out they just hadn’t turned on the screen. Whew!

We boarded – kind of late – but still boarded and were greeted by the whole crew, captain and first officer.

While there was a delay, we took off a made our way to Berlin.

With that, best of luck to all the Air Berlin employees who need to find new jobs and especially to those who made my last two Air Berlin flights happen!