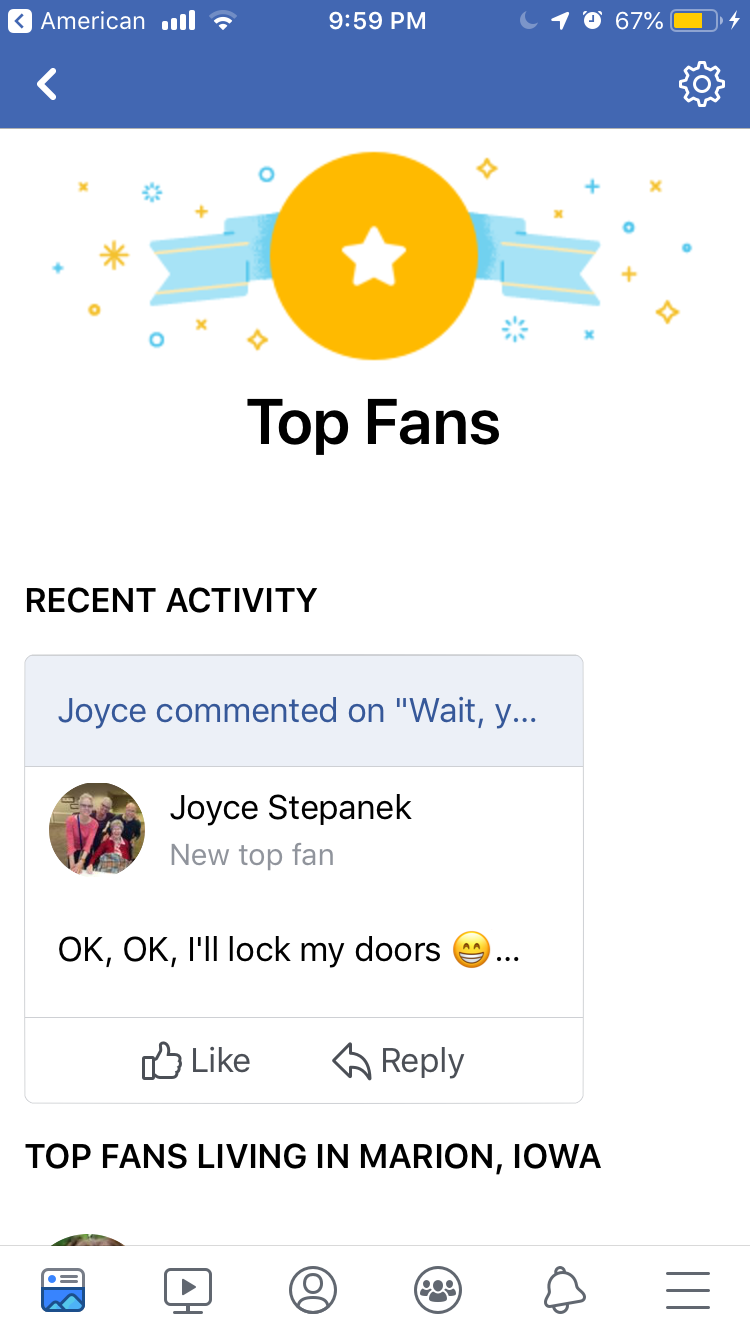 In spring 2019 Facebook rolled out top fans of pages on the network.

For example, I was crowned a top fan of the Cedar Rapids Police Department.

Of course, Facebook told me that I should keep liking, commenting and of course sharing to stay a top fan.

Yay? I guess! What’s the point of being a top fan? Doesn’t seem like much and I did end up quitting Facebook on April 18 and still off it on April 28. That’s a lifetime in social media world! I did log back in to check something for this article. I’ll try to stay off though.

So as a user it’s dumb in my personal case but maybe some people care. This is a step above a participation badge? Congrats you are the top 88th fan. Like posts more to move up. Waste more time on Facebook to move into the Top 70. #snark

It’s certainly a proven marketing model and airline loyalty programs do this. The higher you are on the list based on the amount you fly and sometimes buy the more stuff you get. But you get stuff – like upgrades, free drinks, and earn miles faster. I almost redeemed $30,000 worth of points this year (2019) already.

So that’s worth something. Are Facebook top fan billings getting me a free trip to Aruba? Didn’t think so. But my Capital 1 and Marriott Bonvoy points did.

And brands should definitely draw on this? Yes, that’s a question! Lol. And you thought you had come here for answers.

But let’s walk through this scenario here. Together. #teamwork

Typically I would say: Nurture your top fans. Treat them like it. They are your top ambassadors and many are engaged with your page. Give them that free upgrade.

But what does that mean or can you even do that?

Can you send a post just to top fans? Or why would you even do that?

From what I’ve seen, having a lot of fans on Facebook doesn’t mean what it used to. Way back – in the Organic Era – when you had a lot of fans that meant more people would see your posts.

That’s not what that means anymore today. Often. I was reviewing a number of Facebook pages and the only reason any of them saw high engagement numbers was also because they spend high numbers of funds for promoted posts.

Obviously Facebook has a stake in engagement and users coming back. And getting a badge can feel good!

But what does it mean? Not much really for the user. Maybe they are spending too much time on Facebook? 🙂

And how about for brands?

I don’t see much of anything in there that deserves a special campaign. When you see that somebody who is a top fan comments maybe thank them.

But should we offer them special deals? Maybe Facebook will offer a targeting function with that in mind at some point:

They are our most engaged fans after all. Could make sense.

Really, that’s why we can’t be so dependent on Facebook. Don’t build your content house on rented social media land.

You see the Facebook business model. Of course, I haven’t even seen this as an option … yet.

When you see your top fans, thank them, but chances are that if you run Facebook campaigns you are already mostly on the paid bandwagon anyway.