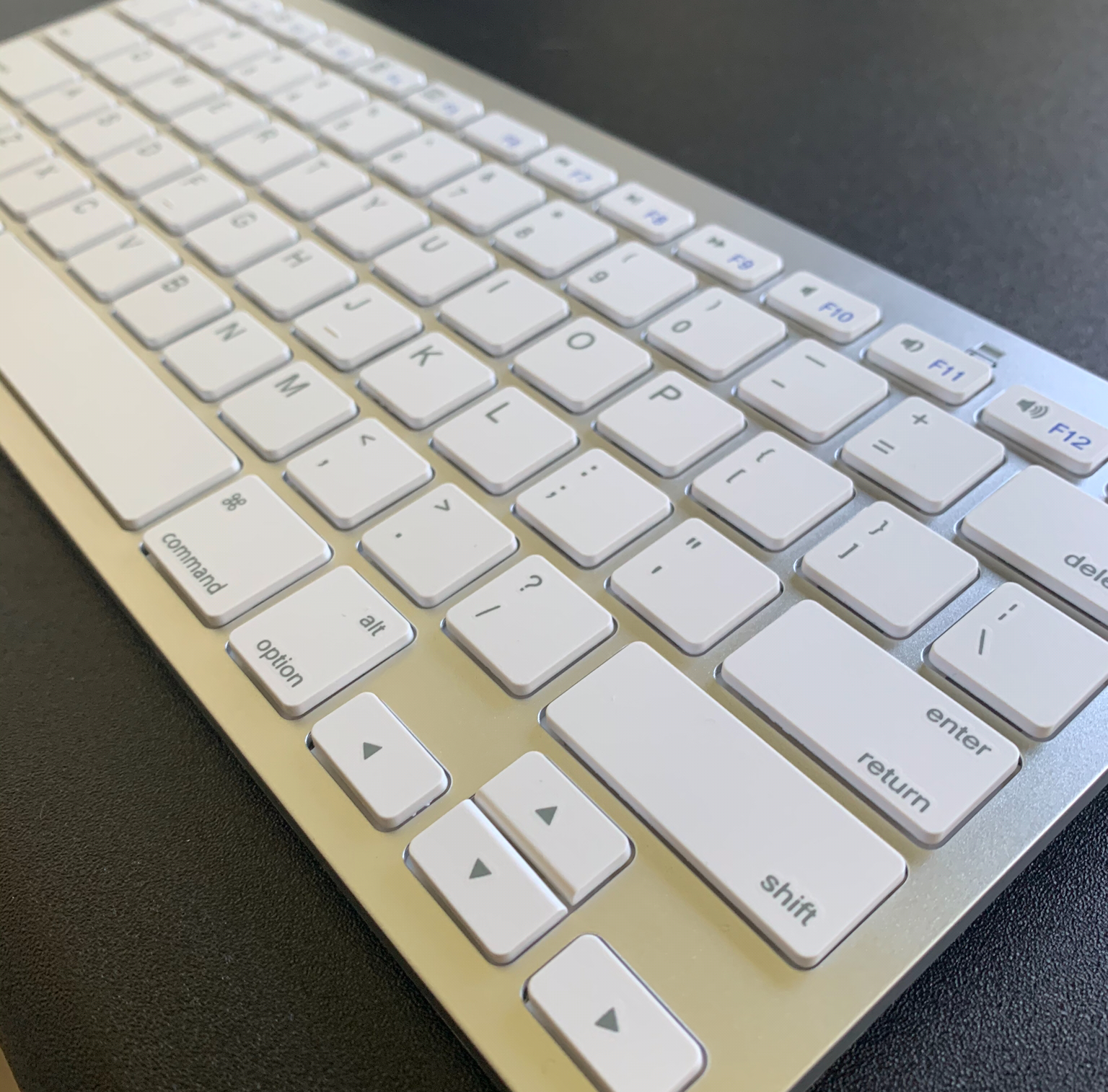 Mobile or rather non-laptop content creation is getting easier and easier. Voice dictation can help us and I love that strategy. There are still times when we need an external iPad keyboard or iPhone keyboard. In 2020, I’ve published 86,000 words and most of those were written on an iPad keyboard. (I did way more voice dictation in 2019 and before).

In this article, I discuss the concept of mobile content creation and share what external iPad keyboard and mouse I use when I’m writing content in my home office. I also take them with me while traveling.

Read next: PODCAST: Will people use Adobe Photoshop on an iPad?

Here’s my current setup and products that I use. I’ll dive into why I love these products. (Links are affiliate links.)

I use this wireless iPad keyboard and mouse setup. Both use batteries that you need to buy separately and insert. Getting the batteries into the mouse was kind of hard.

To set it up, simply pair the devices via bluetooth to your iPad. Pairing to iPhone or really any device with bluetooth works as well.

To get the mouse to work you have to turn on assistive touch.

The mouse cursor looks like this on the screen:

The mouse works well and is similar to a laptop mouse, but some of the clicks are different. For example, highlighting a sentence isn’t a right click and drag but it’s a hold left and drag. The easiest way to think of it: Whatever you do with your finger on the iPad screen is what you do with the mouse. The mouse is replacing the finger.

I like this particular iPad keyboard as well because it’s tilted up and the buttons are real buttons. It feels like a real keyboard.

I use a small tablet stand holder for the iPad to lift it more to my eye height.

When I’m standing at my Varidesk it sits on top of another stand, but when I sit down I use it on its own directly on the desk. Sitting down it’s basically like you are looking at your laptop sitting at a table.

It’s adjustable as well. When I first received it I was surprised how small it was, but all doubts have since disappeared. It’s a useful product and I use it daily.

I also use a 6-foot cord to plug my iPad in while working on it in my office.

It’s been hit and miss with longer iPhone/iPad cables honestly. They seem to break in relative short order. These ones seem to be sturdy and continue to work.

Finally, my entire setup looks like this, on top of my Varidesk.

Is it even possible to create content without a desktop?

I believe it is and as of this writing almost 50,000 searches per month get registered on Google for “iPad keyboard.” You don’t really need an external iPad keyboard to watch movies. It’s most useful when you are writing a lot and to make the content creation similar to what we’ve done on laptops and desktops for a couple of decades now.

We certainly have come a ways from the early-2000s when I worked as a print journalist. I covered news and stories out in the field, took notes in a paper notebook (you know the one that said “reporter’s notebook) and had to run back to the newspaper office to write or really produce and upload any content.

I had a cell phone then but it could only be used for phone calls. I sometimes called back and somebody in the newsroom checked my email for news releases.

In the late 1990s I was using one of those tan Radio Shack transmitters. It kind of looked like an early laptop but with a small screen. I could write on it using the keyboard only. No voice dictation then!

Then to send the content back I would have to find a phone and put these transmitter cups over the phone handle.

Through a dialup tone, the words were then transmitted – sometimes.

Creating content only from your phone would have seemed crazy to even think about. And we didn’t. It still seems far fetched for some today even in 2020.

But is it possible? I think so. I create content on mobile all the time and in late 2019 and 2020 I exclusively used my iPhone and iPad.

Read next: Remote work: How to make working remote for the first time a success

Writing via mobile interfaces and apps – typing, sliding or voice dictating are all options. So is using an iPad or iPhone keyboard.

Podcasting via mobile apps and even with remote guests is possible.

Editing is possible in several apps as well.

Video production also works on phones. Adobe Rush allows you to edit on your phone as well.

One problem I see with video content is that it takes so long to upload.

I’m a bigger fan of audio honestly. Audio can come in a variety of ways, most prominently:

Make sure you have a good WiFi internet connection for live audio and definitely for live video.

Read next: How to maximize your home WiFi

When the internet connection is great live video is awesome and engaging. When it’s not, it can ruin the experience for everyone involved – the audience, the content producer and the people in the video.

Nobody wants to see themselves pixelated on Periscope or Facebook Live. Might as well have done audio in those cases.

It’s definitely possible to create content from mobile devices only.

One workflow issue to think about is: How will somebody edit?

That’s one reason why the whole workflow should be in the CMS. For example, let’s say I’m writing this in the WordPress app.

I can easily publish or schedule a post from there. I can also set it as a draft a ping somebody to edit t draft. And then publish once that has happened.

There are ways to make that more formal in WordPress and other content management systems by having your development team add roles.

Of course, auto pushes of new articles to social media and even the next email newsletter can help speed up the process.

Joma Tech even showed on his YouTube channel how he coded with just his iPhone.

As he showed in the video, using just your thumbs can be straining and hurtful even. I’ve been there. I once covered the Adobe Summit with just my iPhone and my thumbs certainly hurt after doing that for four days.

Read next: How companies can get even more bang out of their event sponsorship and attendance

Fast, efficient and deliberate content workflows can help in a content performance culture. At the end of the day, content that isn’t published has no chance to perform.

Content that isn’t published has no chance to perform.

Some writers will tell you they like and want their keyboard. Fair point and I’m sure writers decades ago said they couldn’t write without their typewriter. And with sturdy and relatively cheap iPad keyboards they can still use a keyboard. And even a mouse.

Another advantage of using a tablet or phone with an external keyboard is that it takes up very little room when traveling. While some laptops are compact these tools are even more compact.

The original section on if it’s possible to create content on mobile devices only was first written and published in 2019 and updated within this otherwise newly written article in April 2020.