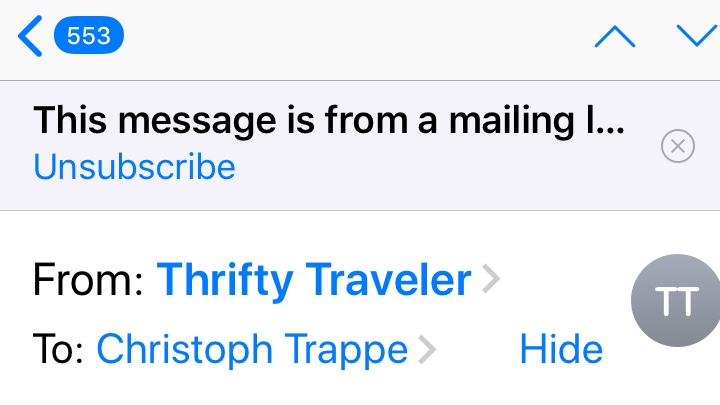 This was first written when iOS 10 was released but remains accurate with iOS 11.3 in April 2018.

In mid-September 2016,  Apple pushed out the latest update, which will work on iPhones 5 and above.

I can’t say I was all that impressed by most of the updates I saw  and those seemed minorish. Email message display looked slightly different, for example.

You can also now apparently handwrite messages in apps like iMessage and send them to others. I couldn’t get that to work, yet, because iMessage was one of the super sluggish apps for me after the update. Either way, my cursive handwriting is terrible, ugly and pretty much unreadable – sometimes even to myself. Earlier, I wrote something up on a board, for example, and when it was time to present it back, I couldn’t even read it back. So, I’ll stick with typing, I think. Ha.

Another update in the email app was this, which showed on top of the message:

When you click unsubscribe, the iPhone checks one more time to make sure you really want to unsubscribe:

GMAIL has had a similar function in its desktop version for awhile and it has made unsubscribing from emails easier for the consumer. Yes, everyone sending emails is required to have an unsubscribe link somewhere, but hardly anyone has had it that prominent. I wonder how this will impact unsubscribe rates – especially when many often open email on their phones.

Picture-only emails aren’t user-friendly – from me

Some people still need the next 10 business days to process an unsubscribe requests. “We will unsubscribe you within 10 days.”

Others send at least one more email to let us know that they received and honored our request to not send any more emails. “We received your request. Thanks.” ??

The new iOS feature – It’s nice to see such a feature and I wonder how often I’ll and up using it. We’ll see.

It’s user-centric and that’s great. It’s also a good reminder to us content marketing storytellers and all email marketers that if our received email newsletters aren’t any good, not relevant or just flat unwanted, it just became a lot easier for iPhone users to unsubscribe. That option is bacially the first thing they’ll see.

How to find your mutual zone of relevance

Do not reply to this email! (Sigh)

Now, we are in a world of churn and people leave our lists but we’ll also get new members to it. Some turnover is expected and okay but how do we make sure our eNewsletters are relevant to our readers? Some thoughts to get you going:

Of course, every eNewsletter should have a goal that fits into the overall strategy, but no matter what it is the newsletter needs to have value for the reader.