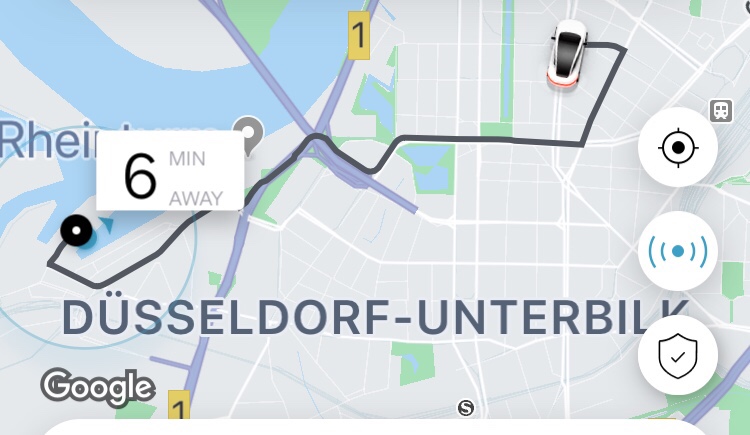 I thought Berlin doesn’t allow Ubers so on a trip to speak at the Content Marketing Forum 2017 in Berlin I opted for taxis over a rental car for my ground transport. Germany requires an international driver’s license document that you then have to register once you land if you want to drive yourself.

That was until I opened the Uber app, you know just to be sure it really isn’t working. And, yup, I couldn’t order an Uber but the regular Berlin cabs showed up. That could be easier to grab one and also to pay since that’s handled in the app – I thought.

RELATED: Stories from the backseat. Uber passengers have done this!

I later did spot an available UberX in the app and this German newspaper article published said a limo company partners with Uber.

I’ve actually seen cabs show up in the app in bigger United States cities – like New York City – but given that I was able to order an Uber I ordered an Uber.

In Berlin, given that I needed a cab anyway,  I gave it a try and called my cab inside the Uber app, which even said no Ubers are available and that I should use the taxi function. The Lyft app didn’t offer this, by the way.

The taxi arrived in 2 minutes – just like the app said. We greeted each other by first name. Just like I do with Uber drivers.

“Yes. Is it your first time using it?” the driver responded.

With a taxi – yes. It worked well and the whole process is virtually the same as with an Uber – except it’s a taxi.

I loved it and appreciate not having to wait for the credit card transaction to go through. The app does that here.

Düsseldorf got Ubers again in late 2018 – just as I was visiting. My first driver had moved here from Berlin to work in a less competitive market.

The service was great and it appears to be cheaper than taxis.

You can call a taxi in the app but there must not be many signed up as I never saw one be available.

That’s interesting to me that there weren’t. Once it took me a bit to find one from the Courtyard Marriott in the Düsseldorf Habor (picture of my room view below) and there was cabs outside but I couldn’t ask for one in the app. Yes, I could have gone outside but the app makes payment easy.

I took Ubers on a September 2017 trip and it was easy and no problem at all.

How I decide to take a rental or Ubers