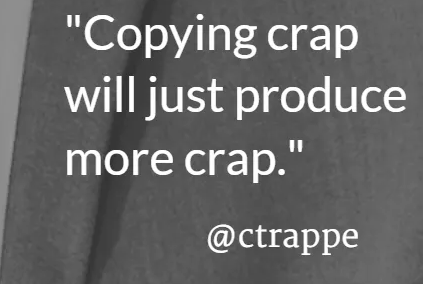 The Internet is filled with useless, spammy and annoying marketing techniques.

Much of it exists because people copy techniques from each other. Even when those techniques are annoying, they quickly are declared best practices – or at least practices that work. Even though the definition of “working” is pretty low.

Example: People continue to sell to each other on social media because that’s what a lot of people do. It works just well enough to make it feel successful.

Also: On social media, in enewsletters and other channels people make users click because the only way we think we can measure success is website traffic.

There are plenty more annoying marketing techniques out there that are being deployed by many. You probably have your own list of pet peeves.

When I ask people why they do whatever they are doing that is not the most user-friendly tactic here’s an answer I get often:

That’s what Brand A is doing and I read that it’s working for them.

Just because it’s working for them doesn’t make it a non-annoying technique that builds audiences long term. And did they say what they mean by “working?”

I’m all for learning from each other and there are many experts I learn things from. I quote them. I take their ideas and apply them to authentic storytelling to help you and me tell better and less markety stories.

But I hardly ever copy something and I certainly don’t copy entire processes.

Now that wouldn’t be unqiue to me and it wouldn’t feel very innovative. And I want to innovate. What’s next? The next season starts the morning after winning the championship.

I want to create something worthwhile to be part of.  Copying somebody who isn’t even doing it right may sound easy but won’t  get me there long-term. It won’t even get me started. It’s actually wasting time.

I remember reading about a company a few years ago. They were known for calling and annoying people over dinner to get them to sign up for their service.

They were hated by many. So why did they do it? Because it worked just enough to make them a ton of money. Congratulations and today they are still out of business.

Learn from others but be super careful when you copy them. You might risk your reputation on it and our reputation is really all we have longer term.