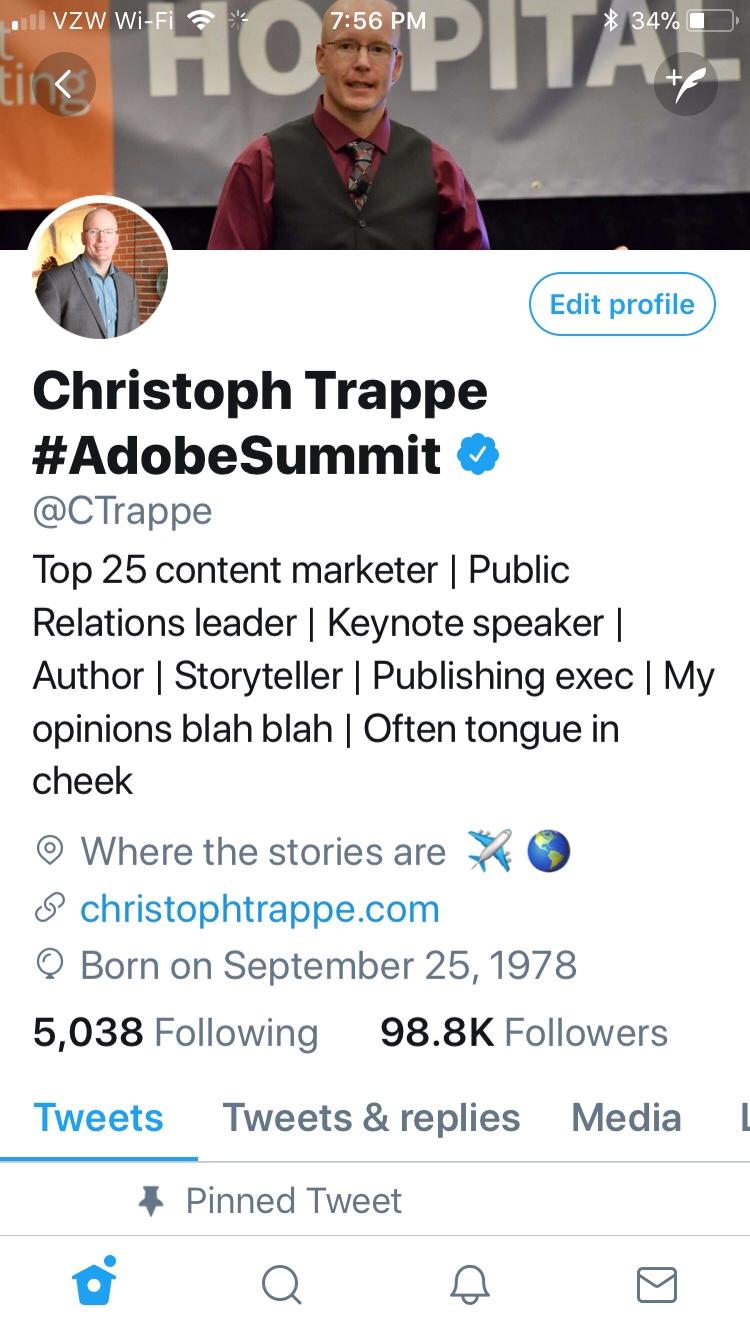 I attended Adobe Summit 2018 in Las Vegas as Adobe’s guest. Nonetheless this is my opinion and not approved (or disapproved) by Adobe before it was published.

I wondered if this is a worthwhile strategy and wanted to give it a try. One thing, I’m not a huge fan of how that looks. But maybe it works to be found and to signal other attendees that you are attending the same conference.

One thing that I noticed was that as soon as I added the hashtag I showed up pretty high when people searched for it on Twitter:

In fact, in this example I show up ahead of the official Adobe Summit Twitter account. How many people would actually click on my name when they search for the conference? Obviously I don’t know but it might be worth trying.

Related: Should my event hashtag include the year?

Some people on Twitter also seem to be using the conference hashtags in their name to promote an upcoming conference-even days or weeks before the conference actually happens. I personally wouldn’t necessarily want to have the #in my name for that long but that’s another idea.

Neal Schaffer, who is an expert on things like this, told me that he does not add the hashtags to his display name but sometimes adds them to his bio.

“I think one’s name and one’s accomplishments should be good enough branding,” he said. “When lots of people add the same thing to their profile name, it further commoditizes their branding.”

Obviously, I feel strongly about my own branding and that comment head home. So on day two of the conference in Las Vegas I will keep an eye on if a lot of people are adding the hashtag to their own Twitter profiles .

Another thing is that if you go to a lot of conferences to speak or to attend at some point you don’t have any room left in your bio or your display name. Are used to add all the conferences to my bio early on in my speaking career and today I just leave it as this.

Related: Why in-person meetings are still important even in the digital age

The final thing to remember when we add a conferences hashtag to our Twitter name we certainly want to remember to delete it again once the conference is over.

Interestingly, the hashtag in somebody’s name is not clickable. So if somebody comes to your profile, sees the hashtag, they can’t even click it to join the conversation.

Brian Fanzo adds: “It only helps if people search the hashtag then search “people” but it’s the same value if it’s in your bio or in your name. For me it makes sense leading up to an event but once your tweeting on the hashtag it has no extra value and might just look cluttered.”