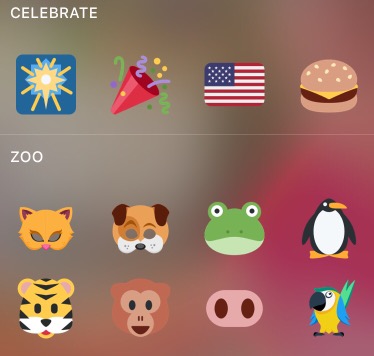 As of early July 2016, Twitter now allows you to add stickers to your photos. Yea, stickers like the ones  kids get as rewards offline, at stores and that sort of thing.

There are several sticker categories on Twitter: Celebrate, animals and flags to name just a few. Some have said the stickers are looking to compete with filters on Snapchat, which as of June 2016, actually has more daily users than Twitter.

To see what the stickers are all about I tried them on a photo from my population health keynote in Boston in May 2016.

How to sketch on the screen during a Periscope broadcast

My story doesn’t change when a competitor’s does

I did look around Twitter some to see what others were doing with stickers and this version took some inspiration from what I saw out there:

So, that looks silly but what does it add? It doesn’t make the story more authentic. Maybe even less authentic.

It was kind of fun to find stickers that actually fit with the picture, but I don’t see myself slowing down sharing a photo in the future because I feel like I need to decorate it with stickers.

Once a photo with stickers is tweeted, you can click on the sticker and see who else has used the sticker recently. That, in theory, is a nice feature, but why would I care about that? It’s not like a topical hashtag that is used to share mutually beneficial content.

Twitter buddy Jonathan Rekedal made an interesting point that these stickers could be used for ads and/promotions ar some point.

For now, it’s good to know that Twitter stickers exist – think of them as another tool in our storytelling toolbox. But, I don’t see them add much to authentic storytelling or content marketing strategies.

We’ll have to see how Twitter users end up using them and at what rate, though. As always, social media strategy opinions are subject to change with new information and behaviors out there. But as of today, I’m not convinced stickers would add much to most stories.

If you have good examples of sticker use, feel free to email me a link here.