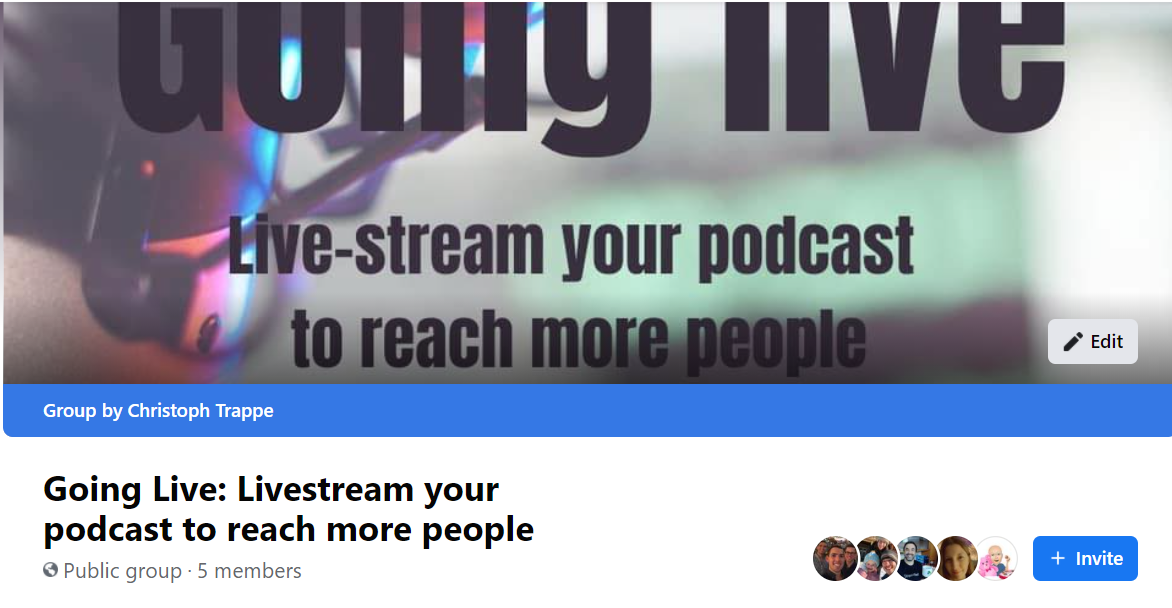 In my new book “Going Live: Livestream your podcast to reach more people” I share the different options for networks to stream to. One, of course, is Facebook. One piece of Facebook that is often forgotten in our haste to build up Facebook Pages are Facebook Groups. In this article, I share how to schedule posts (including livestreams) to Facebook Groups.

This strategy can be especially useful for brands that already have sizeable Facebook Groups or are building them as part of their current strategy.

I do have a love-hate relationship with Facebook Groups that has been well documented. But there can be value when the community engages well with each other, people learn from each other and people are nice!

The first time I livestreamed to a Facebook Group was actually when I started livestreaming my daughter’s basketball games using Switcher Studio. One of the parents had set up a group for friends and family during the COVID pandemic. With spectator restrictions in place, we streamed games to the group.

An advantage of a Facebook Group is that you can connect with people around a topic, a sports team or something else of shared interest without having to connect with them as friends on Facebook.

As I was rolling out my marketing strategy for my new book, I thought I’d give the Facebook Group thing another try. I’ve recently joined a number of mostly useful groups again so why not?

Of course, I wanted to schedule posts to it from my Buffer queue and also consider livestreaming to it. So how do I do that?

The biggest difference for Groups is that an admin of the group has to install the corresponding Facebook app to the group of the platform you are trying to use for your livestreaming or scheduling of posts.

Simply go to the group as an admin, then to settings, then scroll down to apps and search for the app. Once you install apps, they show up in the group apps section.

Then simply go to Buffer or whatever app you are using and install the Group as a channel. You can’t actually do this until after you install the app, which is kind of weird as I didn’t get a notification at first.  Why can’t I add my Facebook Group to my Buffer account? Because the Buffer app needs to be added to the group first. It wasn’t super apparent on the Buffer iPad app.

Schedule posts in groups via Switcher

Certainly, a different type of post, but you can also schedule livestreams to Facebook Groups. After you have added Switcher added to the group, add the group to Switcher in the Facebook area on the distribution screen. Once logged in it gives you the option to stream to your personal timeline, any of the pages you are an admin of and groups that have the Switcher app installed.

Once you are ready to schedule posts for your livestream, go ahead and schedule it. That screen looks like this.

Once you create that post, it creates an event in the group. Remember to go live at that time!

Also consider creating a Watch Party for further reach if that’s the goal.

If you are already doing a podcast or are starting one and have already put in all that time, effort and resources to build a Facebook Group, why not stream there as well?

It’s just another way to get your podcast and livestream content in front of your audiences. Your own brand’s group certainly should have an engaged audience assembled already. Why not get them even more great content from you?