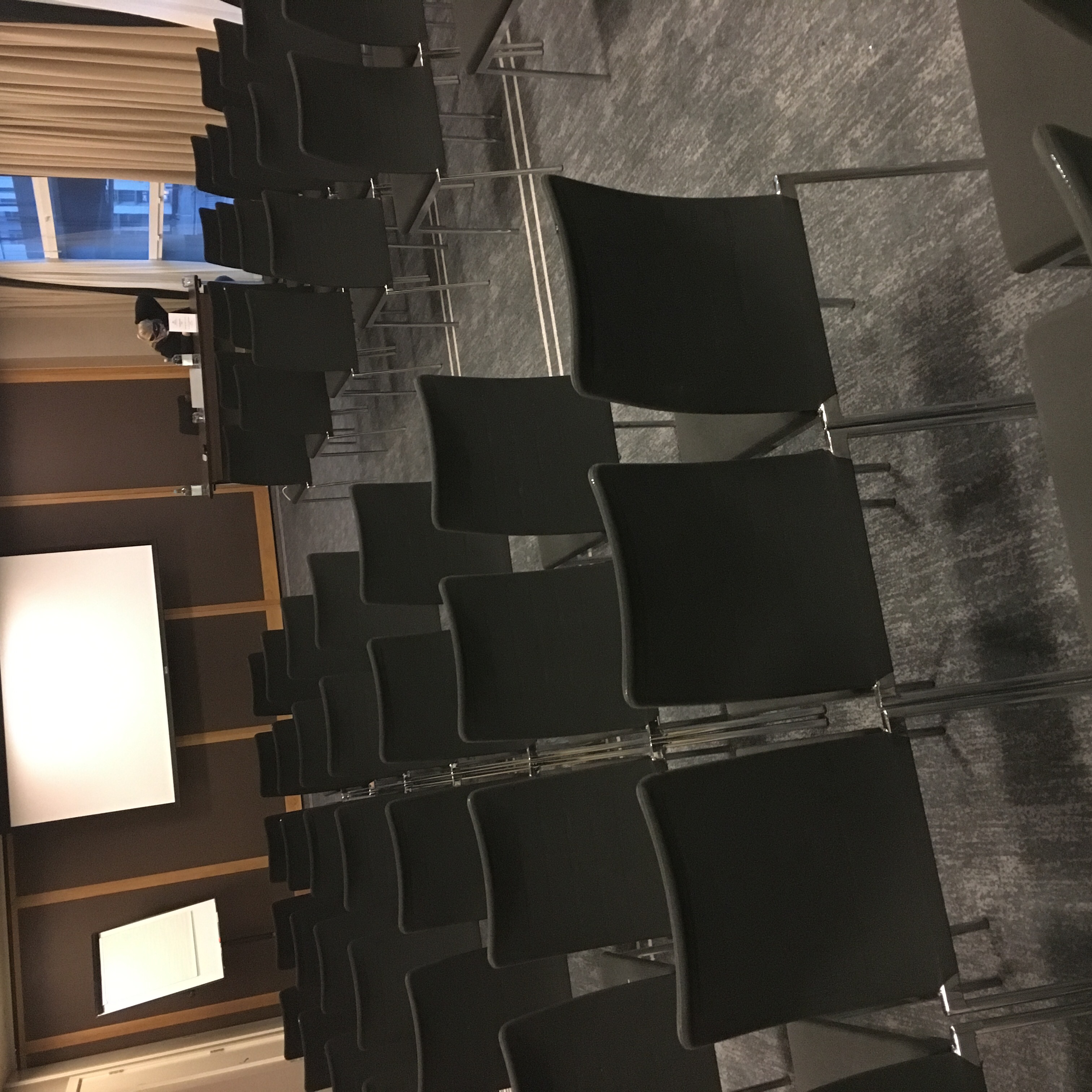 My 10-year-old daughter and I went on a trip to Europe at the end of November and the trip included a day trip to London for the Print and Digital Innovations Summit for which I was the opening session.

We took a quick trip from Düsseldorf, where we were seeing family to London City Airport for the speaking engagement.

Since the airport is in the middle of London the Uber ride to the Hilton where the conference was taking place only took 10 minutes. Potentially my shortest Uber ride ever in London. Typically, I’d fly into London Heathrow which of course is almost an hour away from most things.

We got there way early, which of course meant the room was empty.

My daughter asked: “What if nobody shows?”

There’s always that. Then we will leave and be done I guess. Or talk to whomever did show.

I certainly have had talks that weren’t as well attended as I thought they would be. At one conference in Portugal they moved my time to an earlier slot and had some issues communicating the time change to people. That may have contributed to a lower attendance that may have occurred in the later slot.

But when people don’t attend a talk certainly that doesn’t feel good but the reasons could be ranging widely:

Some reasons may have nothing to do with you the speaker at all but of course it will feel like it’s about you because you are there in front of an empty or half filled room.

For the talk in London I had a room full but my daughter didn’t take a picture because she fell asleep:

Of course not having anyone show is a fear and if it ever happens it’s not something that feels good.

Some of the ideas on how I try to draw people:

Recruit the audience in the room to applaud and laugh loudly to pull others in.

My talks have trended on Twitter at least twice and feedback is often good. But focusing on the potential negatives can always be in the back of our minds.

What if <this most negative thing > happens?

It’s good to think about and consider what our response would be. But let’s not fret on it, but we often worry about the wrong things…

November was crazy fun with travel. Florida, DC, Spain, France, Germany, England. Whew. What time zone am I in?

Pictures: Flying upper deck in business on a British Airways 747

And that is a problem. When we have a lot going on we worry and often about the wrong things. Or at least unlikely things to happen.

For example, when I was in Europe I often woke in fear when my daughters weren’t in the hotel room with me. Somebody kidnapped them. Well, no. I was traveling alone. #dadlife

But if there’s nothing to worry about our brains just make something up.

When I returned to the United States I quickly was joined by more nightmares. I facebooked this:

Nightmares tonight that I was missing flight connections. I checked with my wife and she confirmed that I was supposed to be where I was – at ?. Whew.

Of course, that fear is totally unreal. The last time I truly missed a flight was circa 1999 when I got up late. So even if it happens again in the future the percentage is small. Though running for flights make good stories and American once opened the door back up for a Chicago-London flight for me.

Other marketers and others likely have fears that are unlikely to happen and to some degree we are all risk averse. I know very well in what areas I am and I try not to reveal them. ??? See, we don’t have to share everything with everyone!

I see it in businesses that have to change or at least evolve. Something has to change but there are 4,243 reasons excuses why it can’t be done OR how it potentially, maybe, 10 percent likely, will hurt something else that is going oh so well.

Those are digital marketer and other business leaders nightmares. They certainly can happen, but are unlikely.

But, one response to worry is freezing and not doing anything.

One version of freezing is always needing more data. “We should do just one more focus group.” “Does anyone else have data on this? Let’s research.”

Of course you can find data on the web to support or not support anything. It’s a form of freezing and stalling. Sometimes it’s obstructionism but not always.

Read next: Why editing for preference is a waste of time

And sometimes people revert to old ways – slowly. Before you know it we are back to where we started.

My tips to move forward

Find your advocates and push forward with them. It’s much easier to move forward when nobody is unnecessarily pushing back.

Try little things. Add this call to action to the homepage. Try this new storytelling technique. The list can be long when you aren’t looking for excuses.

Be aware of the rut. It’s easy to follow routines. Make it a routine to always look for the next thing to try.

And always try new things AND encourage and empower your teams to do the same.

It sounds simple and I often worry about all kinds of things. Often the fears are unrealistic and really just give me something to do – so to speak.

So I try to catch that and quickly redirect that energy to something more productive.

Easier said than done. Oh, I know. But in business storytelling and business evolution in general it’s important and necessary to move forward and not stand still and certainly not move backwards.

Keep in mind that standing still is sometimes moving backwards when your competition keeps running.