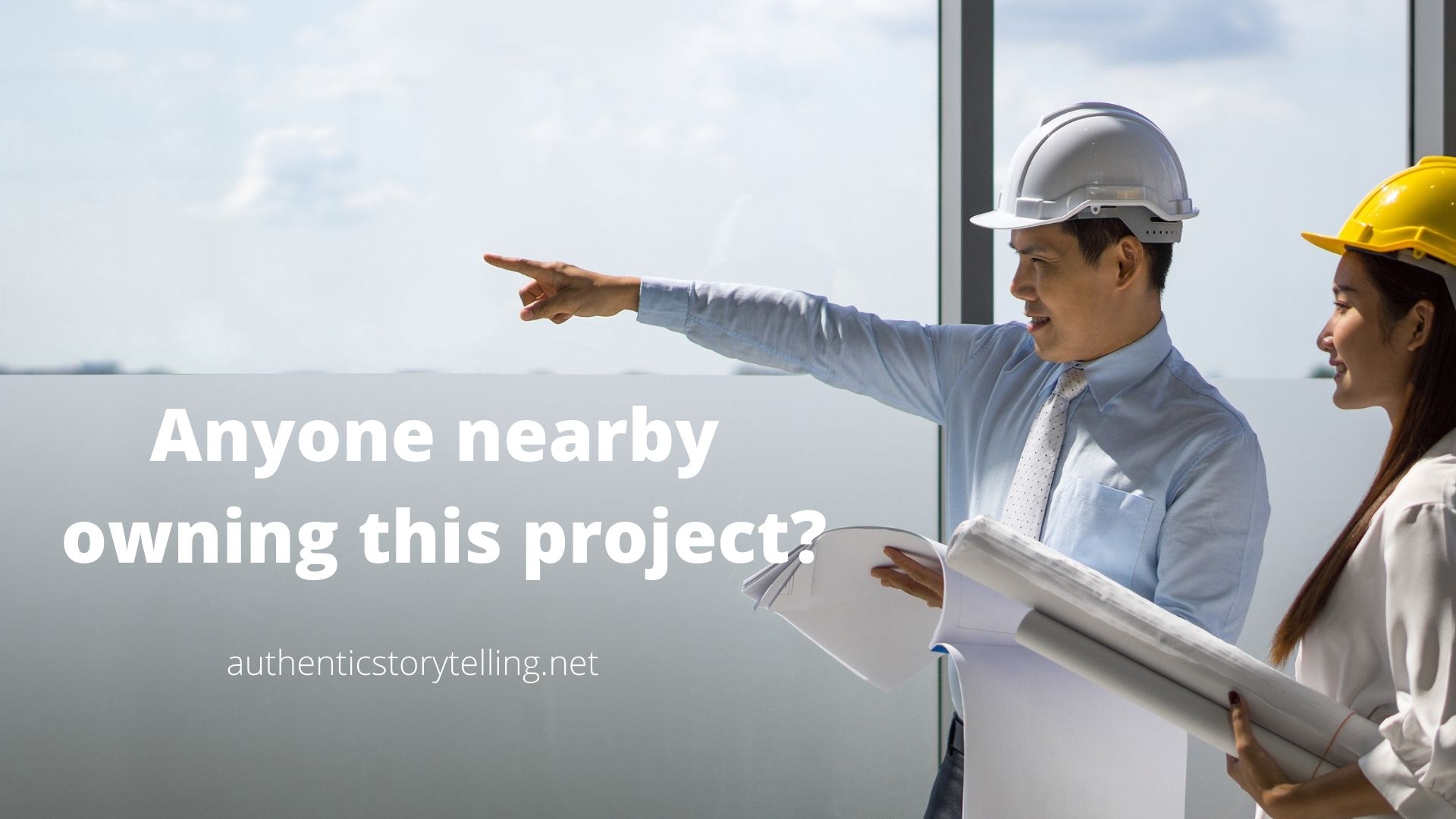 Content marketing strategies depend on momentum and grit that can be lost quickly. A leader leaving can cause these projects to stop immediately. So can stopping publishing too quickly.  That’s why it’s important to have good project ownership and even shared ownership to set things up to be successful.

If you don’t like the term shared ownership consider back ups. Scott Able also mentioned the role of outside consultants as another way to have back ups and make it a success. We talked about this on this episode of the podcast.

Authentic stories can help our businesses, but they are not just tag-lines. Margie Agin of Centerboard Marketing discussed the importance of moving past taglines to build authentic brands on this livestream.

Authentic stories happen in companies of all sizes and we just need to catch them, document them and then use them to advance our business story.

Of course we do want to tie it back to business strategy.

People on the ground floor, those people involved in the day-to-day have to spot the story. They probably already do, but since they haven’t been encouraged to document them, that probably hasn’t crossed their minds.

we need to encourage them to bring them up. As Carla Johnson said on a livestream when bosses complain that nobody has good ideas that often comes back to that the bosses struck down too many ideas in the past and people just stopped bring them up.

To get stories you’ll want them to document them in a non-threatening way for the people involved.

It’s not something that comes natural to many organizations. We want to control the uncontrollable story.

To move forward this new form of marketing and connecting with your communities (aka target audiences) usually requires a champion. This champion, at the least needs explicit support from executive leadership.

Sometimes, the champion can be a top-notch communicator or ex-journalist. Somebody who understands the art of storytelling. And then step by step this person encourages people to participate and they do!

Great stories shared are celebrated. They make people feel good about the place where they work. They connect us to customers and the customers to us.

We are even seeing new customers coming in. They saw the good stories.

People also want to work at this organization. They see the stories and want to be part of them.It’s not like that where they currently work.

Things are great…. storytelling is working on many levels. Make sure the team has a plan and there is a back up plan in place to continue the content marathon. And it is a marathon to drive long-term

I believe in it and I think strategic planning is an important part to actually implement the plan.

But strategic planning has to be deliberate, thought-through but not overthought and then with some ground rules:

The 70-30 rule of agreement: One executive team I have worked with required 70 percent agreement. So if there are 10 people, 7 have to agree. The other 3 should debate but once it’s voted on they’ll walk with the group decision. No hallway kindergarten backstabbing meetings allowed.

Silence does not mean agreement, we need actual buy-in and if it’s missing we need debate.

When strategic planning misses a certain level of healthy debate that’s not a reason for a pizza party?  Of course, debate can be hard in business culture, but if it doesn’t happen in the planning process how do we know we are pushing innovation?

In years of projects, people like to remind me that innovation and change doesn’t always feel good. Same often goes for debate. So seems like the two go hand in hand!

I asked around on Twitter for the original version of this post some time ago. (I’ve updated that article here in 2021 and expanded.)

“Business is meant to be a little messy. Debate cleans it up,” he said. “A good healthy debate deepens understanding within all involved, increases engagement, spreads ownership.”

Of course, when relationships are hurting and people don’t trust or at least respect each other debate is hard. Maybe impossible.

And sometimes people just fall into their habit of agreeing OR arguing. Not because one or the other is better but that’s their default.

“The challenge is that most people either just agree, or simply debate for the sake of debate. The debate should be a thoughtful, brainstorming exercising and sharing of ideas, ” said Jennifer Radke on Twitter.

Sure, we don’t want to throw everything out the window. Keep what works and has a chance of continued success.

But if my strategic plan is to do what we did last year except we will do it this year,  why did we even have to meet?

So we want the right mix of keeping what works, sharing ideas (that means new things!) to discuss and then we should try at least some of those ideas.

One of my first digital transformation and content marketing change projects, one department was openly opposing many steps of the way.

I thought they were so difficult. And they kind of were. But many of their points were valid and deserved to be worked through. Sometimes that’s doable in the current meeting, or we need another meeting and another. Collaboration does happen in person or over Zoom. Especially when the problems are harder to solve.

Sometimes we have to sleep on it – a highly underused tactic, by the way.

But if we don’t have some pushback we aren’t doing something unique.

I use this checklist to always be open for new ideas and to offer my input:

Especially for leaders the last one is important. You won’t get feedback or debate if you never stop talking. Of course, people could also take the liberty to interrupt but you know how that often doesn’t happen.

Debate is good and the best leaders love to be proven wrong.

Project ownership can set the “rules” of engagement

There are many ways to tell a story and yet some of decide to argue over some of the most interesting (aka trivial) things:

You probably have your own examples of nit-picking.

Yes, proper grammar is important and we should all try to get that right. But still there are plenty other examples where people debate things that are a waste of time.

I once had an editor who changed a paragraph. The story didn’t run for a while, so another editor had another shot to make the story “better.” This one changed it back to virtually the version I had previously written. I told him: “Great edits. Thanks. It really made the story better.” LOL.

In reality, it was a bunch of wasted energy on everyone’s part. The paragraph didn’t need to be changed and ended up virtually the same where it started out.

“The best editors edit to make stories better, not to assert power.” – @ctrappe

Certainly, good editors, creative directors and similar roles are useful and can help make stories and their presentations more effective. But there’s a fine line of being helpful and being overly nit-picky.

Moving font sizes that little (and this is not even a made-up example) usually doesn’t add much and just gives people some more work to do.

I was once part of a video project where the sound allegedly was off. As I was watching the footage at the same time I asked: “How do you know it was off?” The answer: “I can see it on the timeline.” So  basically inside the video program. But could they notice it on the video? No, because it was like one frame. Helpful or picky? Of course, there’s also a fine line between being picky and being necessary.

For the most part unnecessary nit-picking and changing of things doesn’t make most stories or their presentation better. And just because the person with the fanciest title spoke the alleged best option doesn’t make it the best option. And sometimes even when it is the best option, was it worth mentioning? It all depends on the importance of the change. That is something that is easy to overestimate.

The practice of the “highest-ranking” person being right all the time seems a bit outdated, but still exists in some organizations. That doesn’t mean that person isn’t right, certainly they are at least time to time, and they definitely get to make decisions for their area of ownership.

But people in power should also be aware of when to yield that power. It’s OK to from time to time, but some bossy decisions for smallish things don’t help the greater good.

Your boss is not your audience!

What’s a culture of storytelling?

Explanations that tie back into a shared goal or vision seem to work best:

I think we should change this because here’s how that will help us get to [insert goal] quicker, etc…

Ultimately, we want to reach our shared goals together. When we don’t it’s not a problem surrounding leadership or creativity. That’s a personnel (aka HR) issue. We might have the wrong players on the team.

It’s easy and meaningful to make changes when they are the best ones to help us reach our shared goals together.

at the end of the day though this works best when you have somebody owning specific pieces of the process  and specific projects.