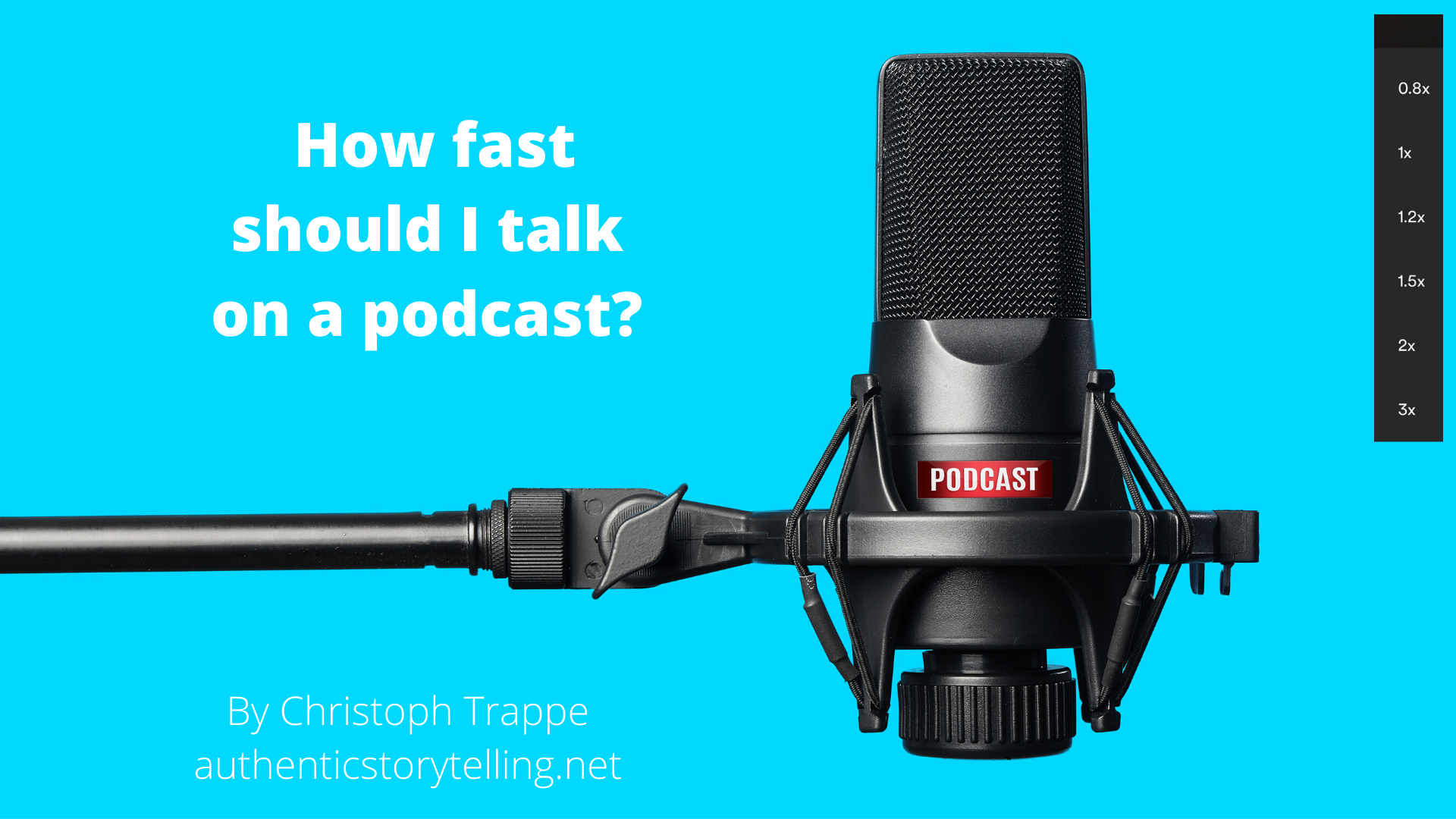 Some of us are fast talkers and some of us talk slower. I typically talk relatively fast or at least I thought I did it. Of course in today’s world of personalization some podcast listeners like to listen to regular voice speech and some like to listen at faster speeds. And I suppose some people like to slow things down.

There’s a technology solution to that.

Basically all major podcast distribution channels now offer the option for listeners to speed up or slow things down when it comes to their podcast experience. That means they can listen to a show at varying speeds including:

And of course: Regular speed.

I listen to podcasts at 2x speed to maximize my time.

Where do people listen to faster voice speeds on podcast?

I catch myself speeding shows up when they have a lot of content that I can learn from and I have a limited amount of time to listen. For example, the 10 Percent Happier podcast shared how interactions on the Chicago subways can make us happier. I listened at that at 2x the speed and got a lot from it.

When I listened to theOffice Ladies podcast, I didn’t like the much faster speed. It lost too much of the actresses’ personality and in that case I listened for that as well as the content. It’s  more of an entertainment  listen than a learning listen. I still listened at a faster speed but just 1.2x. It made me feel efficient and barely lost their normal sound and personality.

When faster podcast speed does not work on podcasts

For educational shows the faster speed might work. For entertainment ones, maybe not.

I also noticed that I didn’t like the faster speed while driving my daughters to school. When I plugged in the phone the podcast I was listening to on headphones earlier started playing at 2x speed.

It sounded weird on the speakers and I didn’t enjoy it at all. Even though I liked it just a few minutes earlier on the headphones.

One of my daughters even said: “What is that?”

We changed it to the normal speed. I suppose the varying speeds and preferences don’t work when you play it over the speakers. Maybe it’s also too fast when other conversations are happening.

I listen way more intently with headphones on compared to when in the car with my family. The podcast becomes more of a background noise while driving with a group. We listen but can’t listen as intently. At regular speeds with chit chat by the host and guest there are times you can totally just tune out and still get what you want to get out of it.

Adjusting podcast listening speed is not something radio offered in the day.

Takeaways for podcast hosts and guests

Personally, I’m not so sure there’s much I can do as a host or a guest. I shouldn’t talk faster to allow people to use the slow-down function. On the flip side, I also shouldn’t talk slower so they can speed it up. I bet most people just listen at regular speed anyway, because they haven’t noticed the buttons, yet. It took me a while, too.

Just talk at a normal speed seems to work. Pauses are okay. Especially when they happen in conversation naturally.

Maybe don’t mistake podcasting with traditional fast-paced talk show radio. There might be a thing of talking too fast. Talk like you would with friends.

I love conversational podcasts the best.

The following also seem to help:

Certainly, many of these tips are also good to follow as general podcasting guidance. Keep them in mind as some people may be listening to your shows at different speeds.

How to tell what podcast speed listeners use on my shows

As far as I can tell there’s currently no way to tell. At least not in Anchor, which is the platform that I use. As you can see below, people listen to my Business Storytelling Podcast on a variety of channels. All those channels would have to gather the playback speed data and then pass it to other platforms – like Anchor.

I also recently looked at all the countries that had people listening to my show. All continents – minus Antarctica – were represented.

I wonder how non-native English listeners use and like the podcast speed levels. We will only be able to tell once it’s added as a metric.

For now, don’t overthink that listeners may listen to you at different speeds. Just be clear when talking during the show, share knowledge and follow the tips above.