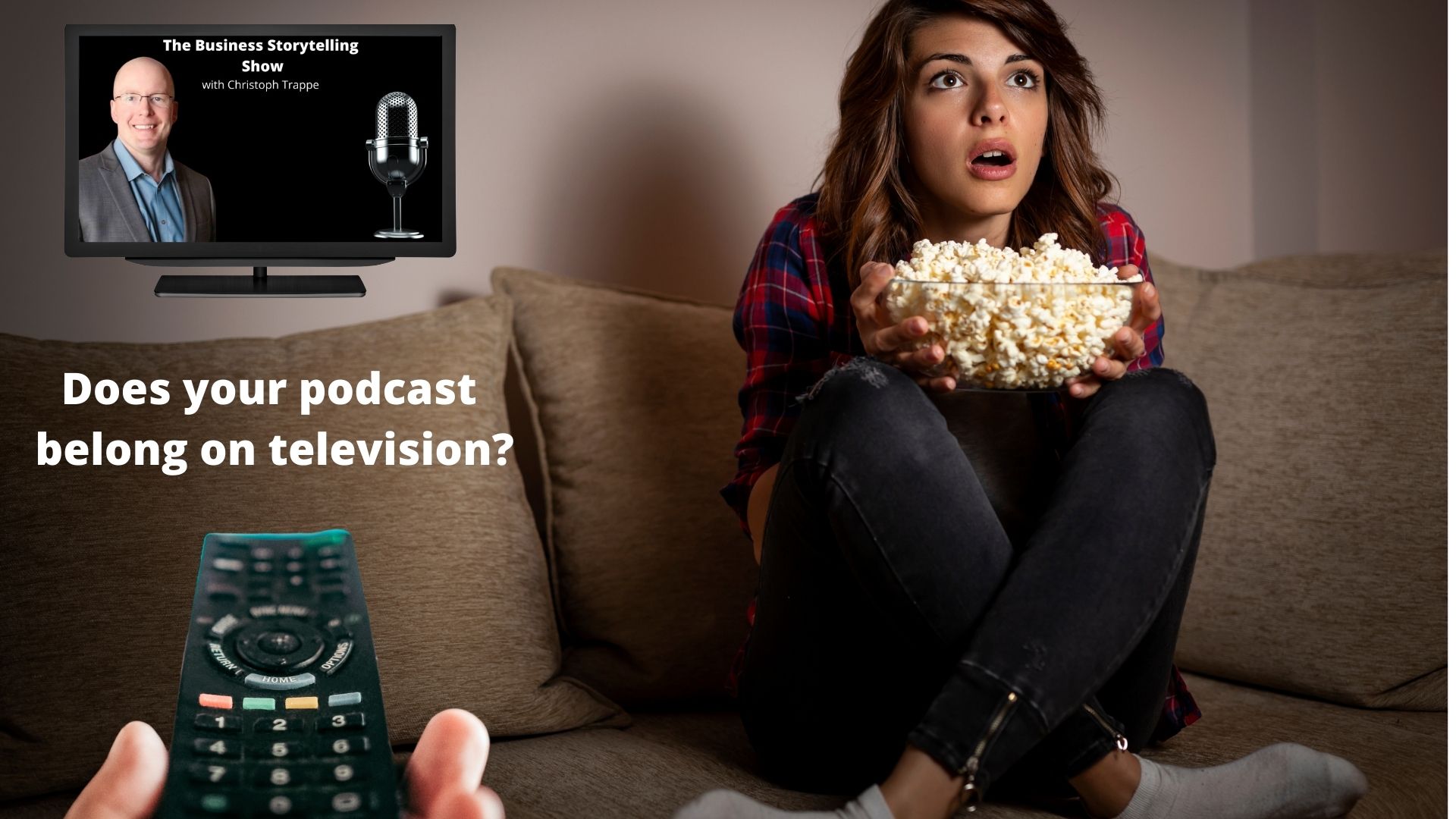 You know I’m a fan of getting the most out of my content through the most channels but publishing my podcast on television? 

Is that a thing? Do people watch podcasts on television?

When I first started with the strategy I didn’t know. But now I do know that people watch podcasts – which are really just talkshows – on television.  It’s no different to when radio shows like “Mike and Mike” started broadcasting on ESPN some people were probably questioning that too.  And those shows ended up being  super successful. 

Now technically you could just watch my podcast on YouTube streaming to a TV set. That’s been available for a while. But how about a TV network? 

I think it’s worth exploring and my guess is that more publishers, agencies and others will start their own networks – similarly to what David Brunner has done with the DB&A Television network.  

Basically, David’s network streams to Roku, Amazon and online.  He put together a seasonal schedule that shows different episodes every day. Just like a television network would. 

My podcast – The Business Storytelling Show – broadcasts episodes every morning at 8:30 Eastern.  Once I livestream them I simply upload them to David’s team which then adds them into the rotation. 

“During the Pandemic, I needed to do something different to keep my clients relevant,” David said. “I decided to start my own 24/7 Streaming Television Network to highlight and showcase my clients on a National and International platform. I am very proud to have the first and only TV Network owned and run by a Media Talent Agency.”

“I joined DB&A TV because I thought it was a good opportunity to share valuable content that would help entrepreneurs and business professionals out there through lively discussions, broaden my audience, and to connect with people in other places where they are likely to consume content,” said Charlene. “It was the next logical step for me and I am looking forward to the new opportunities that arise from it. I also thought DB would be great to work with. I was right. And it’s been fun getting to know the rest of the team at DB & A TV.”

Advantages of broadcasting your podcast on television

You can actually submit your own Roku channel but it’s quite technical at this point.   In fact it reminds me of when Alexa first came around. Creating an Alexa skill was quite the challenging task. Even for your podcast. Today you can simply distribute your podcast to Alexa through Amazon Music and to Siri through Apple Podcasts. 

There’s also marketing value. I updated my opening to mention the network, for example.

While there is a daily schedule for appointment viewing, the shows are also available on-demand on Roku.

That’s great and gives the show additional reach. There’s also an advantage to seeing the most popular episodes. I was pleasantly surprised to see that one of my episodes was one of the most popular.

The biggest change in my process has been the time limit that shows on TV have to deal with. The shows on the network are either 27 minutes or 57 minutes. So that means I can’t submit a 38-minute show, which is my previous average – roughly. 

So my options were to either edit a show down or just cut it at 27 minutes and make sure that my guests know about the time limit. It takes a little bit of getting used to and sometimes can feel slightly rushed.

If I have five questions I have just five minutes per question. When you have a good conversation that’s not very much.

But I also want to be efficient with my content. And wrapping it at 27 minutes sounds easier. And it turns out it is. 

There are also other strategies you can employ. For example, for my 400th podcast episodes I had a bunch of clips from previous guests. Way too many to fit into a 27-minute show. So I just cut the livestream and TV version at 27 minutes.

On the podcast version, I simply added the guests I wasn’t able to fit on the live stream.

As you can see here, the podcast episode had another 10 minutes of content when compared to the TV show.

I would think that most podcasters are interested in growing and expanding their shows.

It’s also another example why it’s important to produce podcasts in  video format.

Even if you don’t livestream them, at least recording them with video can get you a chance to submit them to television networks.