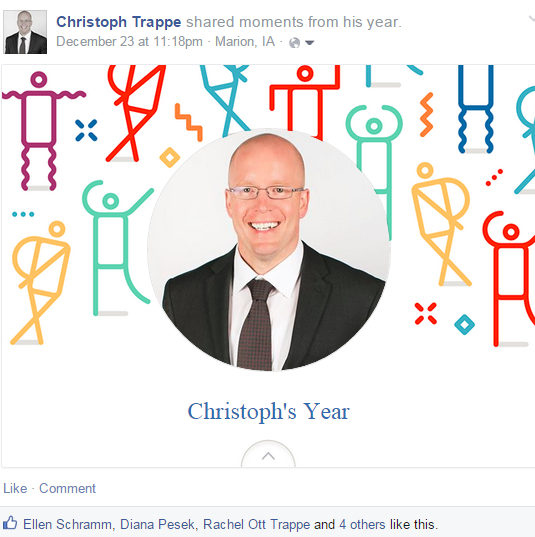 Facebook in 2014 automatically assembled photo albums that highlighted each person’s year. Users had the option of sharing the albums with their networks and could edit the default copy provided by Facebook, which read:

It’s been a great year! Thanks for being a part of it.

This copy, which was kept and published by many Facebook users, of course isn’t always right.

Some years are great. Others not so much. Most are probably somewhere in the middle. Some are great on some days and not so much on others.

I mentioned something along these lines on Twitter a few days before this post and a couple of people called the discussion “trivial.” Perhaps it was trivial when I Tweeted it (which was during Christmas, when we want to enjoy each other’s company), but the point isn’t trivial at all.

Being authentic means that we call it what it is. If the year was great, we’ll call it great. When it wasn’t, we should call it whatever it was. In a perfect digital publishing world of authentic stories, we would also share our stories in a way that allows others to potentially take something from them or even learn from them.

“We are sharing truly authentic stories when we share great and not so great stories.” – @ctrappe

It’s OK. Our lives don’t have to be as perfect and happy as some of us try to make them appear on Facebook.

For the record, my year was pretty great. I started a new job at MedTouch where I work with hospitals on digital strategy, formed Trappe Digital LLC and welcomed our second daughter. There are many other positives and also some negatives, of course.

One of the photos chosen by Facebook for my year in review was my dark United Way office. I worked at the United Way in Cedar Rapids for almost three years. And while the move to MedTouch was great, leaving is always hard.

That photo being in there struck me as a bit interesting, but then I quickly moved on to the photo of my newborn daughter. Then on Dec. 27, 2014, I ran across a Tweet from Carlos Gil that other users were reporting being reminded of bad memories because of badly chosen photos. How could that happen? Hmm.

The Year in Review gathers your most-engaged-with posts from 2014, and compiles them into a chronological photo album, reported Mashable.

(You can read the Mashable article, which has more examples, here.)

Clearly it’s people’s personal preference when (or if at all) they want to be reminded of negative life moments. There’s some negative moments that I basically never think about and some of those happened years ago. When they do come to mind I still feel sick to my stomach. Other negative life moments are only shared or reshared publicly after some time has passed.

Take the 2006 premature death of my son, which I did end up writing about here. it took me eight years to push the publish button on the story and it was the most read post on The Authentic Storytelling Project in 2014.

His death happened on Sept. 30, 2006, and I couldn’t imagine being reminded of it in an album around Christmas in 2006. I’m feeling a knot in my stomach just thinking about it.

I give Facebook credit for trying. Many people did share the albums and I enjoyed looking through the albums of many of my friends. I did question the brevity of my wife’s album, but in essence Facebook had the top highlights in there. One friend said she replaced some images. Not sure how, but that’s what her note said.

Obviously I believe that it’s great for all of us – the community and the person sharing  – if we all share our stories with each other. But it has to come on the  terms of the person whose story is being shared.