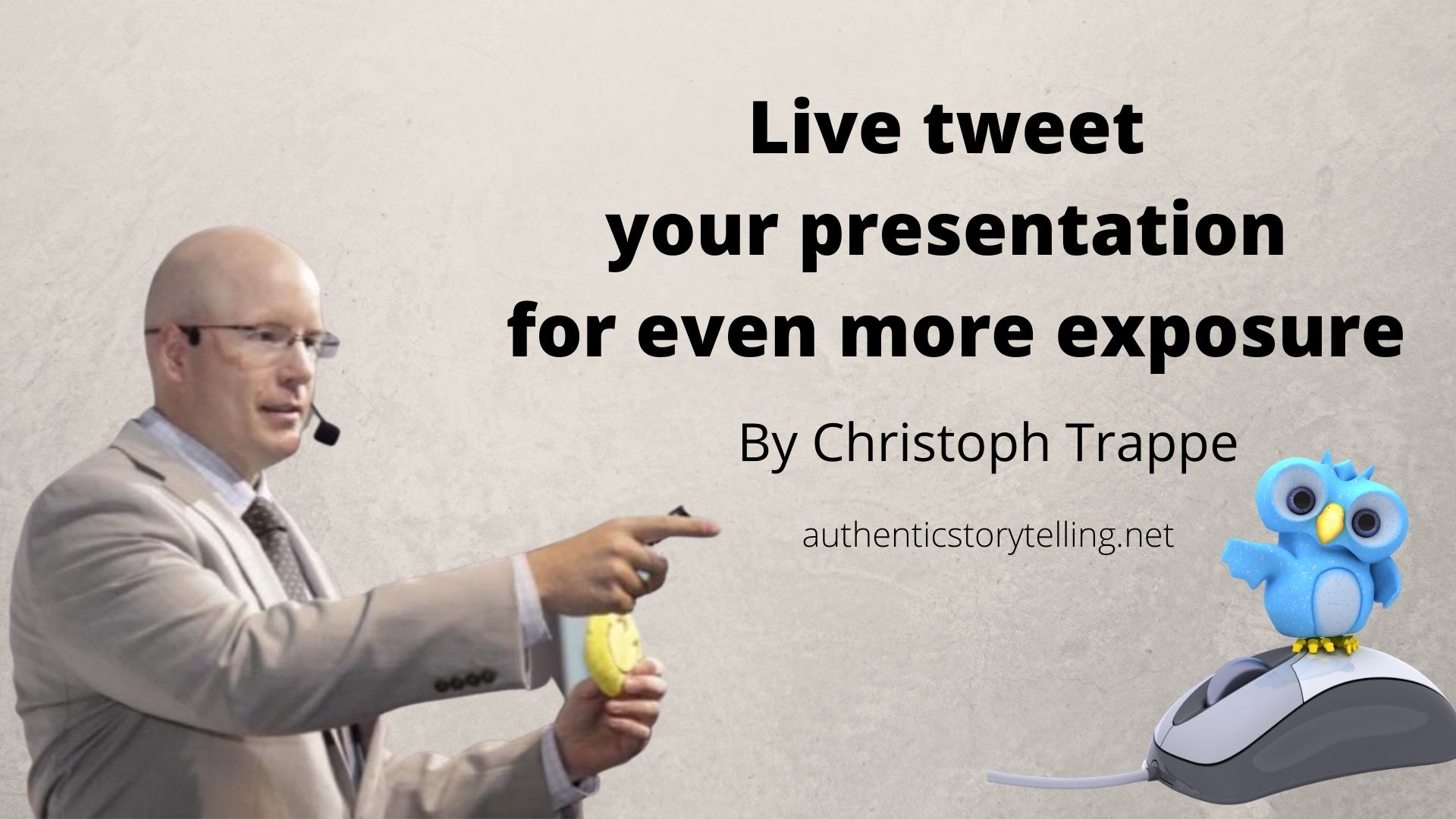 Presentations are a treasure trove of content. Blog posts afterwards. Videos. Maybe audiograms. And let’s not forget about the tactic to live tweet them.

Sometimes it can be difficult to send content to all relevant channels at the same time, including social media during a presentation. Obviously you can’t live tweet from your own account while speaking at the same time but there’s are two ways.

When I presented at WordCamp Denver in 2013 I ran into Sarah Pressler, who presented later in the day, and “live” tweeted her presentation. She had scheduled a number of Tweets to appear at approximately the right times while she was presenting. Many WordCamp – and conference attendees in general – often follow other people’s thoughts about a presentation on Twitter while everyone is using the event’s hashtag. So, people are already connecting on social during events and why shouldn’t presenters participate.

Read next: Tweeting from conferences: Add value – not boredom

I thought the idea was great, wanted to try it and did for my WordCamp Vegas presentation in December 2013 for the first time. I’ve done this for many of my talks over the last seven years since as well.

Book Christoph to speak at your virtual or onsite conference here!

WordCamp Vegas organizers told me they wanted me to do a session on “WordPress for Beginners.” Once the abstract was completed I:

Another strategy to live tweet is simply to have a team member post your live tweets. They could be listening and write them quick and send. In the case of a written speech they could simply copy and paste sentences from the speech into Twitter drafts and send them once they were said. D

Either strategy: Remember to use the conference hashtag.

Here’s a look at the Tweets that went out in 2013. Sorry, they are in reverse chronological order.

Some of the updates were retweeted and engaged people in a way that wasn’t possible before live tweeting your own presentation.

In 2020, when Joe Biden and Kamala Harris were elected to the White House, their speeches were also live tweeted – I assume by a staff member who pushed send once they said specific things.

As you can see they had all kinds of engagement – comments, retweets and likes  – and it helped them spread their speeches farther.

Of course, their speeches were also live streamed to network television and on social media so it’s not necessarily one strategy or the other.

Overall I think it was worth doing and I will probably do this again for future presentations. If you try it, feel free to let us know how it went.

I would also recommend to not stop there in your repurposing efforts. Once Biden and Harris’ speeches were done the entire transcripts were published as well. Here are some other ideas on how you can repurpose your speech content after the speech and after the live tweet has concluded.

I’ve used my content, stories and audience questions from conference talks for:

No reason to not use speech content for other channels. Let’s dive in how that might work.

Throw all of your content a parade and repurpose it.

I try to and always ask the organizers if they are recording. It’s good to have video to see where I can improve. It can also used to share the speech after the fact.

Once I recorded a VR version of my talk in Madrid:

At the very least, it’s good to have video of your speeches so you can use them as a marketing tool. Also, playing a talk back can give you even more ideas for articles. I do this with podcasts frequently:

I sometimes use quotes from guests from multiple podcasts to write one longer article. For example.

Can all speeches be repurposed?

I think it’s possible from most types. I’ve written articles from 10-minute lightning round talks to hours-long workshops. Also, keep in mind that the written article isn’t always from the prepared speech.
I get many ideas from the questions people ask, my answers to them and even conversations after the official presentation ends.
Especially answering questions publicly is a good strategy. When somebody asks me a question during a talk that I haven’t answered on my blog, I’m very likely to write it up quickly afterward.

I hardly ever do this anymore. Videos of speeches will soon be indexed by Google – if they aren’t already. Same with podcasts. There’s another idea. You could audio record your speech and then publish it as a podcast.

Read next: How to start a podcast – Anchor app hosting review

Speaker tip: Record your speech and then publish the audio as a podcast.

Easiest ways to transcribe a podcast and speeches

Transcripts of podcasts and videos do have a place.

They allow people who can’t listen or watch to still consume the content. For example, I was  sitting on the Albuquerque International Airport Observation Deck as I’m writing this section and I can read something but am not in the position to listen currently.

Once your podcast is transcribed it can also be used to finish or start writing your book.

But the point of posting a transcript is to make the content consumption easier for people who can’t watch or listen.

Unlike captions, which move along as the video runs, a transcript can also be skimmed.

There are technology solutions that help us transcribe multimedia. Unfortunately, I haven’t found one yet that is perfect.

The Audio Recorder app that I was using to record podcasts also had a transcribe function for an upcharge of $5. That was worth it – even just for testing purposes.

A few years ago I used to pay $5 on Fiverr to have people transcribe some of my podcasts. Even that seemed like a good investment especially when I found a good transcriber.

The biggest problem might be that it just continuous on and on. There’s no recognition of new speakers, punctuation, etc.

But as you can see from this transcript of a different podcast, it’s just one long paragraph.

The technology might help if the words are close. It could be a problem when something gets transcribed incorrectly and the person reviewing it doesn’t catch the difference. If you just use the transcript as a writing crutch this might be okay.

I would recommend trying it and timing the two ways. Is it quicker to do all the transcription or is it quicker to have the app transcribe and then clean it up manually?

Maybe more importantly: How can you make sure there are no mistakes from the app transcript that are hard to catch without listening again?

There are plenty of other apps and software services that offer transcription as well.

In general, I’m not a fan of just transcribing and sharing a speech as a new story. The flow of a spoken story may also be different and some – many? – spoken speeches go on tangents. There are stories within stories. Some of those stories can be additional articles.
I usually recommend this workflow:

If you are a fan of transcribing audio before writing anything – and I know many writers are – consider finding a way to publish the transcript, use additional quotes for infographics or pulling additional tweets.

Can your voice be consistent across channels?

Sometimes it feels like teams are overthinking the “voice” they are trying to hit. Think of brands that say their voice should be:

Everyone says that and unless the brand voice is vastly unique, overthinking voice doesn’t help that much. Nonetheless, keep in mind the brand you want to be and also who you actually are. I had received feedback before saying they didn’t like my directness or “attitude.“ Some of that certainly is hard to consider, but watching a video back c

At the end of the day, using the content from our speeches in other channels can help us be more efficient and have an even better chance to create content that has a chance to perform

Some of the content in this article was originally published earlier, but updated and re-published in November 2020 to make it current and add additional examples.