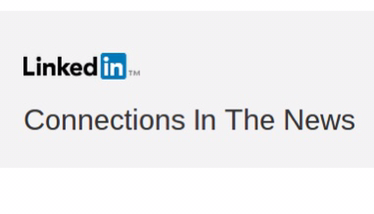 LinkedIn now sends emails and alerts that share mentions of people in your networks across the web. I’ve enjoyed the updates very much as they include news about people that I’m connected to and care about.

It appears that – as the title says with “connections” – that the notifications  are about people that we are connected to and not brands that we follow. The emails appear to include mentions in what I would call traditional and/or mainstream/established online media. I’ve seen updates from large-to-medium sized newspapers and large online media outlets.

How to mix social media and traditional media

Updates have ranged from connections who are now playing in the NFL and who are being discussed in the sports media, executives who were quoted in news stories and thought leaders who published guest expert columns in outlets that qualify to be included.

Since brands aren’t included, this is an important reminder that people who are frequently quoted in the media can spread their message even further if they connect with relevant people on LinkedIn. Some of the updates that I have received from LinkedIn, I would have never thought of seeking out on my own, but since they were right there in my email, I read them and found them interesting.

Under each article right inside the email LinkedIn gives you two functions:

How to share relevant information for your organization and audiences

In general, I haven’t been a huge fan of LinkedIn emails (there used to be way too many), but this one is pretty good and useful. It’s information I didn’t know existed for the most part. It’s like a Google Alert that I didn’t know I should have had setup.

A great feature for me – the community member consuming content – and also a great way for people being quoted in the news to get their message out there.

A few months after I published this initially I noticed that I was getting fewer emails of this kind. I did not change my settings. “Connections in the News” notifications were now pushed to me from the iPhone app directly on my phone. The mentions also show in my feed:

This was first published in January 2016 and then updated in August 2016.