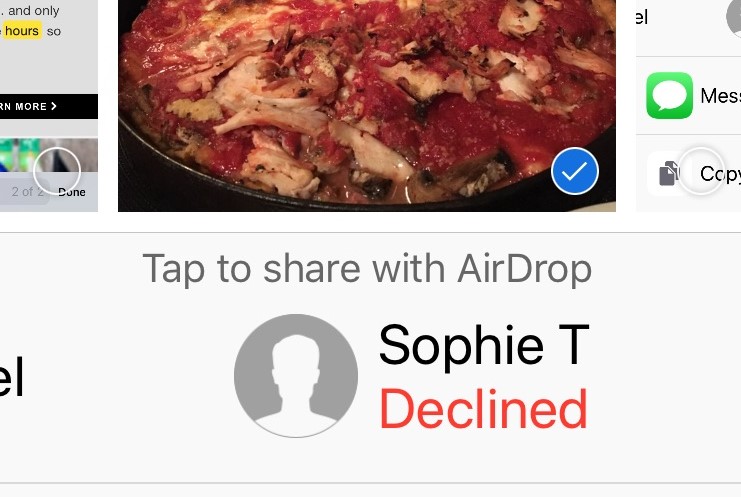 I was in Chicago as we were flying to Cancun from there on – what happened to be – St. Patrick’s Day weekend. As travel life goes, we had 4 people on 3 linked but separate airline reservations.

Why? That way I had a chance at least to upgrade everyone. All first-class upgrades cleared on the way out, and 3 of 4 for Cancun to O’Hare on a lie-down 787. Given that there are 3 reservations, I have to check 3 in separately. That means different record locators and boarding passes get saved separately.

If you print boarding passes you have do that 3 times in this scenario. We did end up having some time at the hotel waiting for the shuttle and I did end up printing them that way as well. But the night before I checked everyone in from my phone and then wanted to share them to my wife’s and 11-year-old’s phones. Airdrop is a fantastic way to do that so I tried to airdrop it to my daughter’s phone, which is titled just iPhone.

Only one iPhone was showing so I dropped it over. And they declined. Huh?

“Sophie, why did you decline my AirDrop?”

Whoops. I tried to send it to somebody not a member of my family and probably another hotel guest. What could the danger have been?

But what if I accidentally dropped something else confidential! And how would you feel if you get something send to you by mistake? Accidental “accept” clicks happen I’m sure!

I quickly went into my daughter’s phone and changed her phone’s name:

Settings >>> General >> About Change the name there.

Now it looks like this when I want to send her something:

Something to consider when you use this functionality often, especially between family members and team mates. Of course, another best practice certainly is to verbally ask the other person what their iPhone name is. But when there’s a bunch of iPhones nearby that doesn’t help.

For example, when I cover conferences and want to drop something to another person, that can be a problem.

If you are attending any of those and want to meet up, just drop me a note via email.

Apple fan boy moment: How to pay people via iMessage!

So that’s how you change your iPhone’s name and maybe you agree that this is a valid reason! 🙂