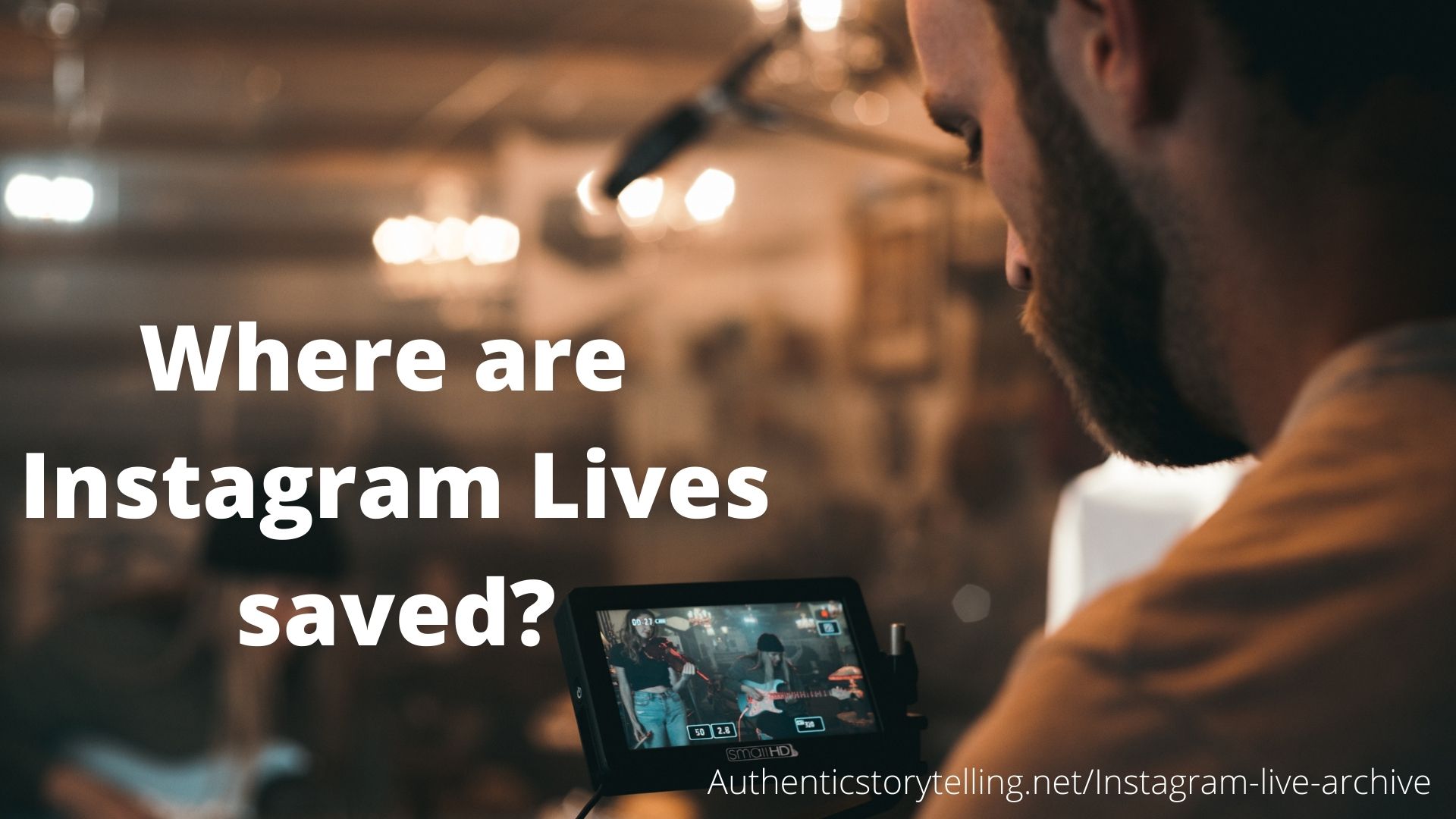 An Instagram Live archive can be helpful to content creators whose audiences watch live streams after the fact. And many people do that as I share later in this article.

I’m definitely on the going live on social media bandwagon and frequently livestream my podcast recordings on multiple channels:

Here is an example from an episode where we talked about easier video storytelling.

What channel is currently missing here is Instagram because it doesn’t integrate with the tools I use to stream but that doesn’t mean I’m not interested in understanding what happens to live video on Instagram once the live version has ended. Is there an Instagram Live archive? I dug in to find out.

Why you should care about an Instagram Live Archive

Periscope (Twitter) live streams can remain public for longer than 24 hours. That, of course, can turn them into a longer term content asset.

Before, when Scopes were only available on Periscope for 24 hours the majority of viewers had to watch live or shortly after. Sometimes the time was just not convenient for people to hop on a live stream.

But now, since live video can be available for longer, I would recommend thinking about sharing content that is still relevant later on.

This also opens the door for organizations who struggled with the value of live video when just a couple of people watched. Now the viewership can increase later. You can even reshare old videos over and over.

But are more people watching the replays than the live broadcasts? I kept on eye on that over recent streams and my numbers confirm that more replay viewers than live  viewers tune in.

Here’s a look at some:

As you can see all these broadcasts still get views after they were initially live streamed. The same concept of course applies to good content writing and SEO and also Instagram.  Don’t just create for the moment and extent the moment over time.

Get more shelf life from live video through timeless content.

How to push a Live to the Instagram Live archive

Start your Instagram Live like you normally would and talk for several minutes. You can also do the stream with a guest. The theory still remains that livestreams should be at least 15 minutes.

How to do a live audio broadcast with a remote guest on social media?

Instagram now tells you how many followers are currently active. So on this recent Saturday morning when I tried there were five active users so even if they all show up that’s not a terribly huge audience.

At the end of your broadcast just click the end button and you will be prompted to either delete or save the video. You can save to your camera roll which would then allow you to use the video on other channels or you can push it to Instagram TV-also known as IGTV.

From there you can pick a thumbnail, add a description and even share the video to your timeline. What’s the difference here is that the replay no longer shows up in the Instagram live bar which used to be the case.

Of course you can also use the download function to save the video and then re-upload it to Instagram and other channels. That might be the better multi channel strategy honestly. Nonetheless I’ve seen live video be worth my time while recording podcasts.

Read next: Video storytelling; The unsettled debate: Which way to hold the phone for video shooting!

Here are some additional thoughts and tips on how you can keep your content more timeless while being timely to keep it relevant for people watching later. Or reading later in the case of written content.

Every once in a while an expert in one thing or another will Tweet a link to an older blog post that’s relevant to a current topic. It’s timeless content for the web.

A lot of times others who are mentioning it on their streams mention that it’s from a year or two or whatever ago.

A lot of times, it’s indeed timely once again (or still) but many times had it been written in what I call non-time sensitive language it would be even more relevant yet today… because you wouldn’t be thinking about the time element (and think: Oh yea, this is old).

Much content is timeless, however, and is as relevant two years from now as it is today. But it can be hard to not use time-sensitive words or phrases in writing or even while speaking on a podcast or video.

Some examples of this kind of time-stamp language:

Might as well just cut many of these from newly-created materials. They often don’t matter when you write about issues. (They do matter at times in print journalism when people actually read a paper in the morning.)

I think about how many of the content organizations create and how they are not necessarily as time-sensitive as a news story, for example.

Some things are, of course. Like a video wishing people Happy Holidays that looks at current holiday-related projects.

Many aren’t. A piece on how a project that teaches skills that help people in the ever-changing world and workforce can and should stay relevant for a while. At least until somebody decides the specific skill mentioned in the story is no longer taught.

I saw a video from 2004 in 2013 and it had interviews discussing a specific organization.

Now, while this is a few years old much of what they said in the video was still relevant in 2013. And  still largely is in 2020 .

And if you don’t look at the quality of the video (it’s not HD) and nobody tells you that it is from 2004 you may never know.

In the online world, it’s much more user friendly anyway to use dates as opposed to today, tomorrow or yesterday. I’ve heard of some strategies where online editors say that those words are used to show immediacy and are later changed. But I’ve never actually seen a site where they are being changed later – which doesn’t mean that those don’t exist. I have seen sites where tomorrow actually is now a week ago. It seems like a lot of work to go back and change terminology anyways. I’m not sure that’s a good use of time.

So, why doesn’t everyone write this way? Because it’s not the traditional way we are taught. It doesn’t come easy.

It’s much easier to write TODAY as opposed to finding another term. Or perhaps better: Remembering to find a different term.

How do you change it? Here’s what has worked for me:

And of course you can use the strategies on your live video, your podcast and in your written content.