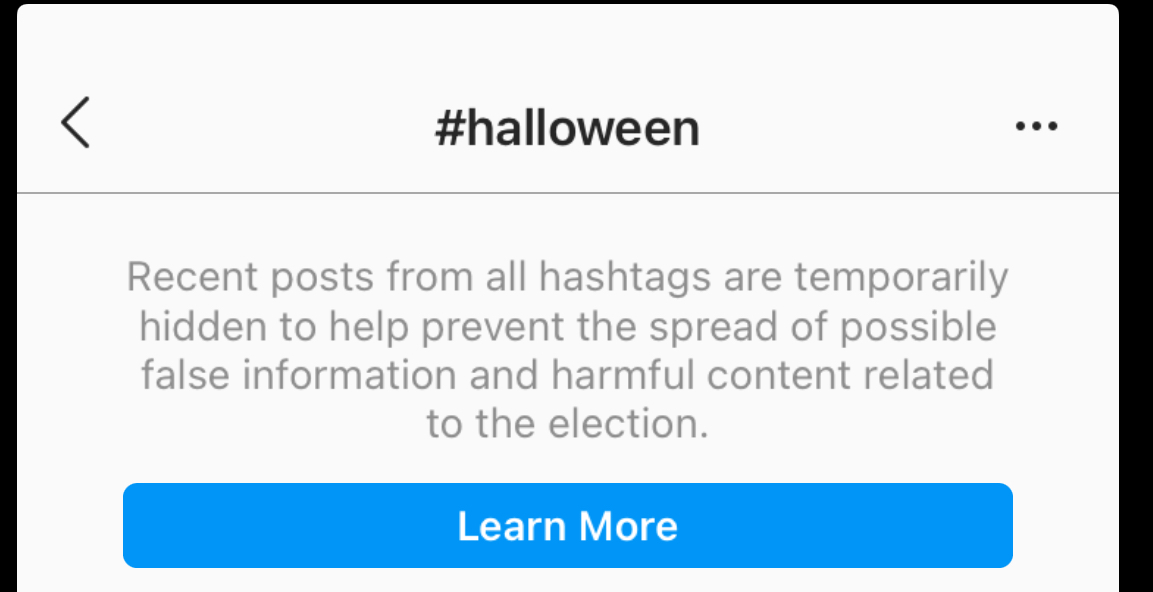 Instagram hashtags can help us be discovered by people that don’t follow us. And usually using hashtags on Instagram – in your posts and stories – is a good strategy. Just don’t overdo it. Initially I reported this would go through at least November 3, 2020, which is election day in the United States, hashtags are not working and completely turned off to browse.

As of Nov. 12, so almost 10 days after the U.S. election this measure is still in place.

It makes sense to try to spread the propaganda through social media. Certainly we remember the miscommunication campaigns using social media advertising in 2016. Will hiding the hashtags across the network truly prevent miscommunication? Not sure.  But I suppose it’s a strategy worth trying. Plus it’s only a few days.

How to not get duped by actual fake news!

How about other social media networks?

I just checked Facebook, which owns Instagram; LinkedIn and Twitter and neither of them are showing a similar warning. I can peruse newer hashtags on those networks.

Hashtags not working on Instagram seems to be a short-lived issue that will return to normal after the election polls have closed – which is a little over three days from the time of this writing.

I think it’s OK to use your regularly drafted hashtags in your Instagram posts even if posted before November 3.

Given that Instagram Stories only stick around for 24 hours – aside from the highlights bar – it’s probably currently a waste of time to use hashtags there.

Read next: How should we be using the Instagram Stories highlights feature?

You’ve heard me talk about how the Russians influenced the US election through Facebooks ads and the importance of actual authenticity and realism in our corporate storytelling.

But yet people continue to try to trick us. Marketing guru Larry Kim even did a test on how easy it is to spread fake news by spending just $50. Read his experiment here.

aside from networks taking action to prevent the spread of fake news there are also things consumers can do.

What is fake news?

Fake news is when somebody deliberately produces and disseminates stories that look like real news but are made up.

Fake news can be similar to propaganda. The term fake news hit the mainstream when Donald Trump became the 45th president of the United States in 2017.

He often called news he didn’t like or not favorable of him fake news.

Negative news is not necessarily fake news if it’s true however.

Journalists from time to time making mistakes is also not fake news. Journalists are human afterall.

Fake news is usually purposefully wrong and tries to incite an action.

Of course, content marketers try to get people to engage and buy because of their content, but that alone also doesn’t make content marketing copy fake news.

How consumers can spot fake news

Don’t trust sites by default if you’ve never heard of them. Let me give you an example: One of my state’s senators (Chuck Grassley) said this in late 2017:

“I think not having the estate tax recognizes the people that are investing,” Grassley told the Register in a story published Saturday. “As opposed to those that are just spending every darn penny they have, whether it’s on booze or women or movies.” SOURCE

People started sharing this quote on social media wide and far. Many linked to websites I’ve never heard of. I didn’t know if they were legit or if somebody made up the quote or what not. Of course, as you might imagine I don’t think that’s a very nice thing to say. Why is it the senator’s business how I spend my money?

Anyway, when I first saw the links on Facebook I didn’t know if somebody was just making it up or what was happening. None of the sources were known to me and with that I didn’t know if they were legit or not.

So, I kind of paid attention but didn’t know for sure whether or not the story was legit or not until I saw it in more mainstream media like the Washington Post.

Of course, as soon as the Washington Post wrote about it Chuck Grassley also issued a statement saying the sentence was taken out of context. He meant it differently.

The Washington Post coverage now gave it credibility. I guess originally the Des Moines Register covered it first but I didn’t see it from them. I only saw it from those other sites.

Also, ask yourself: could this even be possible?

The thing about the Internet-which can be beautiful when used for good – is that anyone can set up a website and start publishing.

How organizations can stay real

As more and more organizations hop into the content marketing game that also means that they have to establish themselves as credible authorities on the topic and in other words not fake news. So how do you do that?

Read much more about this in my authentic storytelling book.

It’s certainly okay to pitch to established publications but I’ve found that when they mention me after finding me the return is usually bigger. For example, the PR Daily listed me as one of the top public relations people to follow on Twitter in 2017: I didn’t ask them to include me but them including me actually drove growth in my Twitter audience. Instant credibility transferred.

So, basic content marketing principles apply: Have a good strategy, keep moving forward. It’s a marathon and not a sprint. And maybe most importantly, don’t fabricate and publish fake news. 

Four episodes of my Business Storytelling Podcast, which has had over 220 episodes, have Instagram specific topics. You can find them below.