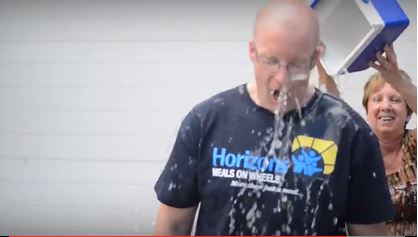 The Ice Bucket Challenge has made a difference according to published reports:

Healthday reports “It actually funded a study that has discovered an important new ALS gene.”

Every Tuesday, people from around the healthcare industry discuss healthcare topics during the #hcldr chat on Twitter. The Aug. 26, 2014, chat discusses the Ice Bucket Challenge.. Dozens and dozens of my Facebook friends and Twitter connections have posted videos of themselves taking the challenge of dumping a bucket of ice cold water on themselves to support ALS.

Most mention the names of the people they challenge to follow their leads. Some mentioned that they also donated to ALS, which reportedly has raised tens of millions of dollars from the challenge..At one point I heard that you either donated OR dumped the water on yourself.

Some people have questioned the challenge – talking about negative peer pressure. But the success of this campaign – if measured in dollars – is unquestionable. Donations have topped $70 million, which compares to $2.5 million during the same time period last year, according to the ALS Association.

Most Ice Bucket Challenge videos are pretty short but one of the most powerful ones, and which also speaks to the power of authentic storytelling, is the one below featuring Antonio Carbajal. He was diagnosed with ALS and shares his story in this video (after the opening).

“It wouldn’t be working if we weren’t irritating some people,” he says about some of the criticism received. (Very true!)

Donations have gone up, but has awareness been raised in a meaningful way? Maybe. The easiest way to find out is to ask yourself these questions:

The #hcldr Twitter chat is Tuesday at 7;30 p.m. central U.S. time. (You can read a prep post here.). Participants will discuss a number of topics. While I’m planning on participating on Tuesday, I’m also taking a stab at the questions here.

Question: Do you think the Ice Bucket Challenge is a good thing for healthcare? For healthcare social media?

It’s another great example that stories spread when others – people not working for a brand – share them. Many of the people donating and participating have no connection to ALS but they want to participate. They opted in.

According to the ALS Association, there have been 1.3 million new donors during this time period. I first heard about this campaign when I saw somebody post a video of themselves dumping ice cold water over their head.

The ALS Association also handled its own social media well. As far as I can tell, the first time the association publicly participated was by announcing a record number of donations coming in. As of Aug. 24, 2014, the campaign is also mentioned as the top story on the association’s website.

Question: What can healthcare leaders learn about social media & philanthropy from the Ice Bucket Challenge?

You can’t force social media engagement. It happens when people want to participate. As far as I can tell, the ALS Association did not start this and also didn’t try to force it even more when it started taking off. The association just added context from time to time.

Adding educational content and context can help push the cause further.

Question: What other diseases or healthcare issues do you hope will “go viral” on social media one day?

There certainly are plenty that are worth our attention. The ones that activate advocates in an organic way and tell the best stories will be the ones that will take off.

We can all be advocates for causes that are near and dear to our hearts and start spreading their stories today. (Maybe wait until the Ice Bucket Challenge is over, though.)

By the way, I also participated: