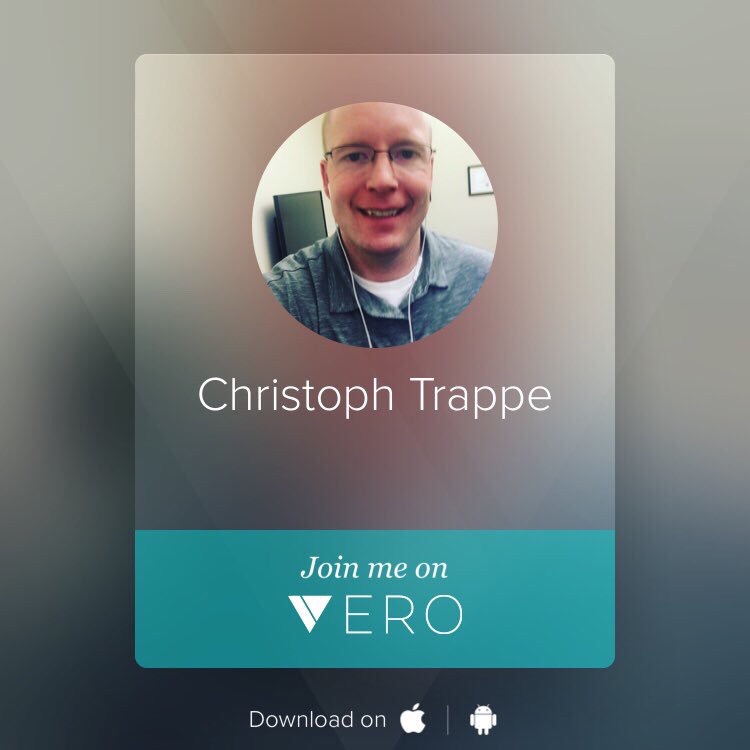 I still think the social media landscape has some shaking up bound to happen. Not sure when or how, but the key players have been the same for way too long.  Might Vero be the app to disrupt the market? Let’s take a look.

In a relatively short time in March 2018, they grew so fast to over 3 million users that the servers needed upgraded, per Vero on Twitter. Yeah, on Twitter! Even the new potential disrupters use one of the power-player networks.

I headed over to the App Store to download the app, which took forever. I even checked and my daughters weren’t streaming eight movies at once so it wasn’t due to that. #dadlife

The app looks nice, with a standard timeline view and a posting screen:

There are six options for posts – two of which I never thought of needing: Book and Music.

When you click on them you can search for books and music and then post about that. Better than lunch pictures maybe? Anyway, none of my books so ?.

As far as I can tell you can’t post simple text status posts.

When posting a photo it’s possible to add a link that is also clickable – which isn’t possible on Instagram as of today (9 March 2018). So that’s a potential plus.

Of course, before Vero will be useful for anyone you have to connect with people. Likely all the people you are already connected to on other networks like Facebook. So what’s the point? Maybe it’s a good way to move away from some audiences. Maybe.

Who is already doing Vero well?

Gary V is often a good person to look at for the use of new and emerging networks. He certainly has a reputation of maximizing any new new network quickly. He did it with the new defunct Vine and others.

With over 5,000 followers and a handful of posts it looks like he’s trying it – like a good digital marketer should, of course.

He seems to be posting similar content like his other networks – which of course isn’t a bad strategy:

But if all my Vero connections are also my Facebook friends Twitter followers and Instagram connections what’s the point of having them in yet another network?

I don’t know if Vero will offer new value. Maybe they don’t have an algorithm? Yet! But all networks seem to end up going to one at some point so that’s just a matter of time probably.

For now, it’s worth keeping an eye on and making it part of your Create Once, Publish Everywhere strategy.