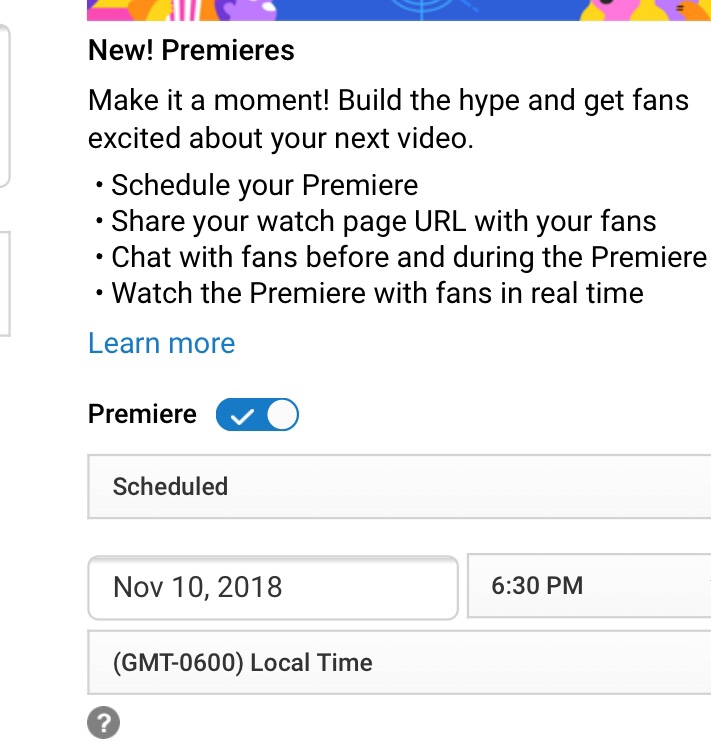 YouTube rolled out a “premiere your video” function in November 2018 and of course I wanted to give it a try.

As a consumer, YouTube often owns my video consumption time and as a content creator it’s one of the easier ways to share video stories – even my pre-teen daughter is a YouTuber. Though native WordPress video uploads have come a long way.

YouTube premiere allows you to upload your videos and then schedule them to publish premiere later.

This doesn’t appear to work on the mobile app and you have to upload from desktop or the desktop version on Safari on mobile devices.

The trick is to change the drop down to SCHEDULED. I missed that the first time.

Then upload your video regularly. As long as you set it to schedule the premiere options are usable on the next screen.

Pick a time of when you want it to premiere.

Once that’s set and the video is uploaded it’ll go live at that time. You can already share the link and people can chat with you and set a reminder to be noticed when a video goes live.

I can’t actually vouch that the notification works.

I did set the reminder and never got a notification – at least not one I remember seeing.

I’m a big fan of pushing things to different networks automatically and do that on this blog. Every article pushes to:

So that was less than perfect and I also didn’t see an option where I could change what YouTube would push to Twitter.

YouTube is actually a great option for live video – especially when you have an audience there. But in this case, this was misleading and I wasn’t live.

What to do with the Premier feature on YouTube

Promoting your videos is important and I’m not sure that YouTube premiere will help with that. You still have to do the work of promoting it.

So why not just publish it and give people what they want right then without making them wait?

Once promoted, people might even go to it. And then they can’t view it. Ugh.

Yes, they can set a reminder but who has time for that? I know I don’t.

In general I think it’s a nice intent and sometimes teasing premiers of certain kind of content actually can get people to consume it later. I would say that the amount of YouTube videos that would fit that category is relatively small.

If you have a video that’s worth sharing, upload it and start sharing it. That’s typically my opinion but if you have a number of videos for a serious for example you could stagger the release that way.

So if the video released on Monday has some kind a cliffhanger toward the Wednesday release the premiere might work. Of course, you still have to drive numbers to the first one to even get people to tune in for the second one.