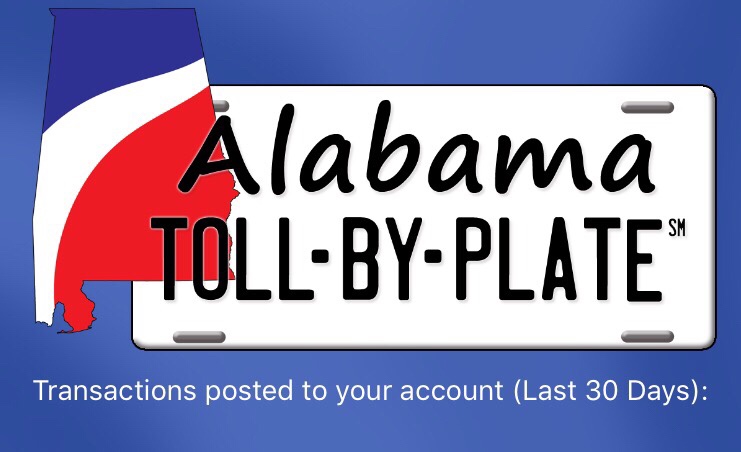 On a 2018 trip in Alabama the GPS was telling me that we have to use a toll road and I started to wonder how to best pay my toll. The toll-by-plate app came to mind.

And there was no device in my car but we noticed that you could download the Alabama toll-by-plate app to pay toll without having to stop. I’m a big fan of using iPhone apps for anything. And this would allow me to easily pay with credit card and earn points.

We quickly downloaded the app, added our rental cars license plate number and credit card information to take care of charges in the most efficient way.

I was envisioning cameras over the interstate like they have an Illinois where you can just fly through pass going the speed limit if you have an iPass device in your car. You can also pay later online if you remember when and where you passed. One time, when I was traveling with a business buddy he was taking pictures and then went online to pay. Seemed like a lot of work but we were in a rush.

It turns out during our 90-minute drive through southern Alabama we only crossed one tollbooth. And we did actually have to considerably slow down and drive through an unattended lane/booth that said it was for toll-by-plate users.

So that may have saved us a couple seconds. On the way back to Mobile, Alabama, there was no such lane and we actually had to stop at the attendant booth and I asked her if I could use the app. Her response was that I would just have to tell her and she can push a button on her system.

Of course, that wasn’t much faster than had I simply paid $2.75 in cash and maybe a couple seconds faster from having to turnover my credit card at the booth-if you can pay with credit card there.

Maybe the system works smoother in other parts of Alabama but from my limited experience it is in the early stages of rollout and could use some improvements. That’s okay. All technology innovation starts at the beginning and then there’s a phase to integrate with existing systems.

Certainly, integrating new technologies with all the established workflows can be a challenge. Another example that came to mind was when we visited the USS Alabama battleship and there were signs to download the app to get a guided tour on your smart phone.

I actually didn’t notice the signs until I was a little ways into my tour and didn’t notice the initial sign until I was leaving even though it was right there. In hindsight I was thinking whether or not I would download the app instead of talking to my family that was accompanying me. I didn’t see anyone else during my entire tour on their phones so my perception would be that no people used the app at that specific moment in time. Of course, that’s just perception.

If I was going on the tour alone listening to an app would be great with my AirPods in and shutting out noise from the rest of visitors around here. I assume there’s audio in the app. I don’t know, though.

Nonetheless, I applaud anyone who chooses to innovate and develop potentially useful technology. And apps like these have great potential to improve the user experience. That’s customer- focused and I hope more companies try – even when they think they don’t have to.