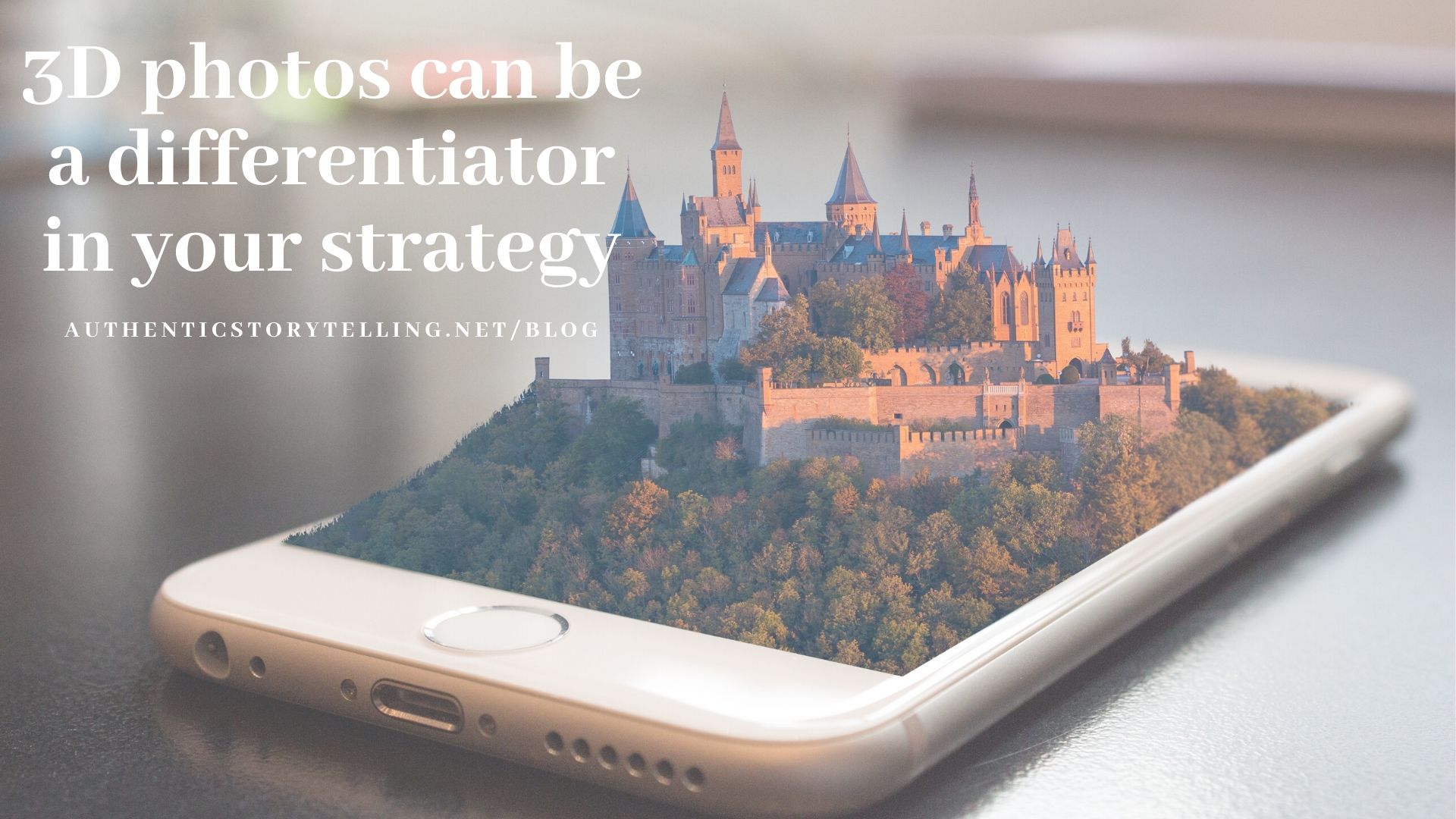 New content types – like 3D photos – are usually something worth looking into for brands trying to build their brand and get their messaging in front of people. New content types when the story is relevant can draw attention.

I would put 3D photos into that emerging and new category.

What are 3D photos?

3D photos show an image basically from different angles. An example would be a person and you can move around them in the 3D photo. In a 2D photo, which is what other photos are, you show one side of them. 3D photos show the person from more vantage points.

I used the Fyuse app to shoot this. If you can’t see the embed above, check out this link.

Here are some examples from the app of what 3D photos look like:

Facebook also calls these pictures 3D, which I think is a start but also a stretch:

Also check out: What kind of virtual reality videos are worth watching and how to produce them

Why should we consider doing 3D photos?

New content types can draw attention to our brands. I remember doing augment reality with United Way a decade ago. It drew attention from the community, media, etc. The same concept applied when we launched the first United Way app.

Using new content types first can be a differentiator.

If a new content type fits within your strategy try it. Don’t just do it to do it. Have a reason.

She also shared what currently are the preferred content assets by big-time publishers:

Read next: How can infographics work on mobile devices?

The written word still matters, but when we file longer and longer content we also have to break it up with visuals. 3D photos can work well here. Other photos, too, of course. And also infographics – interactive or not.

Amanda’s definition of an interactive infographic: The graphic reacts to an action by the user. That could be a click, entry of information or the likes.

How to create 3D photos with your smartphone

There a host of iPhone Apps it’s getting easier to shoot good 3D photos.

The market will likely expand and if it takes off Apple might just add a 3D camera to the iPhone – like they’ve done with panoramic, slo-mo and time-lapse functions over the years.

Read now: The easiest way to do time lapse videos with your iPhone

Other 3D photo apps that you could consider trying for now and that Jeff Gamet pointed out to me, include:

I tried the Fyuse app. It was pretty straightforward, but also takes some getting used to. What new technology doesn’t? At its core, it’s simple.

Then take the picture in a continuous motion – similar to taking a panoramic picture.

From there you can save it and upload it to the app’s stream. Saving to your phone and other networks is a bit trickier.

The app does allow downloads in different formats like GIF and video.

You can also grab the embed code and then place that on a website like I did above. To get to the embed code section, keep scrolling right, then click more.

Twitter does allow you to upload GIFs already. So if you have a GIF version of your 3D photo that may work. If your photo qualities for Twitter’s requirements there will be a GIF button in the bottom left. Click on that.

To me it seems what Facebook calls 3D is a bit of a stretch. Photos shot in Portrait mode on iPhones can be uploaded as 3D, but the interactivity is somewhat limited. The pictures draw more attention when you scroll up to one, because they look different.

I also see some advantage Facebook drawing attention to the term 3D photography. I was attending a parade of my daughter’s teachers during this social distancing due to the coronavirus. I took my daughter’s photo in portrait mode and Facebook said I should upload as 3D. It got me thinking about the technique.

Here’s how that looks in the Facebook app on IPhone:

Of course, 3D photography and production can be taken to a whole different level. I saw that while visiting the Shapify booth at the Adobe Summit in 2017, which I was attending on Adobe’s behalf.

They put you in this big scanner-type machine. Think airport security, but it takes a little longer.

Those walls then swing around  to “scan” you. Hold that smile for 12 seconds please.

When that’s done the scanned image looks like this and that’s downloadable:

Depending on your pose you can use it as an animation or print a figurine like this:

I was chatting with an exec later who did this too and he said: “I just send the file to my 9-year-old to print on his 3D printer.” Cool!

What was interesting about that booth too is this story I saw happen a number of times:

I walked up. Examined what it was. Asked some questions and said out loud: “Why would I ever need a figurine of myself!” The person in line said they had that same thought. And then got into line. So did I. ?? That line was getting longer and longer.

I don’t really need that figurine but it was interesting enough to try. Maybe I could offer them for sale when I speak? LOL.

Anyway, it was a cool process to see and try. If you stand a certain way you can animate yourself online.

In storytelling, 3D printing or animation could make a story even better. You can show something or somebody in 3D online. Let’s say an organization is prototyping some new uniforms, this is another way to showcase that prototype.

Certainly, there are ways to use this new technology more and more in storytelling. A handheld scanner would be a good idea.

There certainly is potential to use 3D photography now and it certainly with evolve with emerging technologies in the field.

If you have a part of the content you are working on that could be shown three-dimensionally trying 3D photos might be the way to go. I also like that you can take 3D photos with the right apps on your phone without needing other tools. That’s different from VR. In the case of virtual reality video, which can be shot with an iPhone as well, you still need to add a VR camera to the phone.

(Affiliate links to the camera)

I would try 3D photos and with the option to embed them on your website they could work with a blog post. If you are running a social media-only campaign they may not be the best option quite yet, though you can use the app link. I couldn’t get native uploads to work for now.

If you are running a strategy with the website as your centerpiece, embedding the pictures there within context, makes sense and is probably the way to start with this new content type.