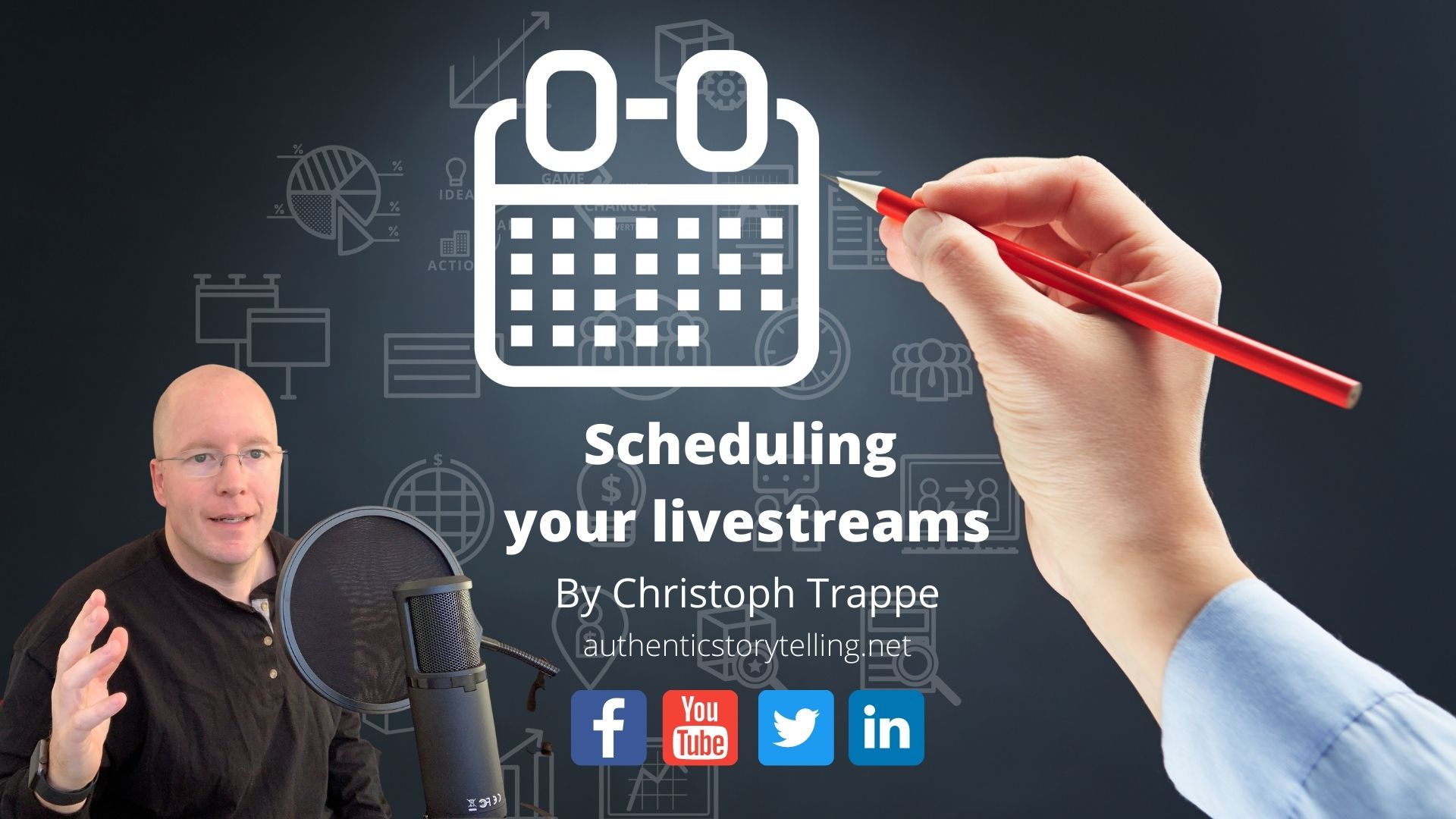 In my new book “Going Live: Livestream your podcast to reach more people” I talk about how to promote a livestream. To schedule livestreams has been a forgotten strategy for me, but that doesn’t mean I can’t start it up again! This article discusses how to easily do that, but some background first.

In short, my answer had been not to promote livestreams at all until they are live. Then I started sharing promotional images and let people know I will be going live. When I want to promote my Amazon Live channel I might share that link with an image. But there’s actually a better way! I was getting ready to work on a webinar and livestream with Web Insights and decided to once again look into the function to schedule livestreams.

Let’s see how I setup livestreams to different social networks and whether or not it was worth it. The biggest problem I have with the practice to schedule livestreams is that now I have to go live at that time. Stuff happens. Things move around. But it’s also a good reminder to actually go live when we say we will.

When to schedule livestreams

The debate around when to do anything online rages on. Insert the blank. When should I send that _____:

And there certainly can be advantages to sending emails at certain times, though when everyone sends their emails at 7 a.m. on a Monday there will be a traffic jam in my inbox.

On social media, which is where livestreams go, the debate on when to go live becomes less and less relevant. All these networks now have algorithms that highlight content on other factors – not related to time. I’ve gone live at many hours of the day and I’ve seen success and failure in so many different timeslots that I really don’t see time being that important of a factor.

Please don’t read this that I’m not a big fan of analyzing what is working and why it’s working, but there is also the flip side of overthinking things and incorrectly analyzing them.

Social media trends change constantly on when the best times to publish are. Publish at 1. No 3. On weekends. Mondays. Wait, no. Wednesdays. Good luck even keeping up.

Really, the best approach has become to share valuable, audience-centric content on a consistent schedule. Mix it up, but don’t overthink it.

The time of publishing blog posts or other articles is similar. This site’s WordPress dashboard shows me the most  popular day and time for visits.

Some people say that this should be my guide for when to publish articles. Thing is though that many of the visitors aren’t here to browse articles. Many got here through a Google search or a social media link. Many are not here because they are looking for a new article. I don’t know many – if any – who sit and say: “I wonder if Christoph’s latest article or livestream is now coming out?”

So don’t overthink it. But, I still do like a weekly scheduled time for livestreaming though. Here’s why:

Scheduling times that work for guests

I know we are all used to starting shows on the top or the bottom of the hour. But why? Because that’s how TV does it? Or radio? I find going live exactly at those times is difficult. Here’s why:

For those reasons, I would recommend this setup:

That way the stress to show up early is gone, you can chit chat for a moment and then go live a few minutes later. What’s the right amount of buffer? Hard to gauge honestly.

Also, keep in mind that if you miss the published schedule time, don’t sweat that either. You can just delete the event and start an immediate livestream. Some viewers might notice and the bigger your show grows the more of an issue it could become. In general, it shouldn’t be a huge issue though – especially when you just get started.

How to schedule livestreams – the technical stuff

Since I like to stream to LinkedIn, YouTube, Twitter and Amazon at the same time, I found it easiest to set this up in Restream. Here’s how:

Click on events to get started in your dashboard. Not scheduler!

Once you click schedule a livestream, you can add the headline, description and toggle the networks you want to stream to on.

Once it’s saved, you can click over to the different networks to see the “Plans to go live” post.

If you want to multi-stream with Restream and use Switcher Studio as your production platform, that’s also possible. Inside Restream, find the RTMP code for that specific stream and copy and paste it into the “Custom RTMP” area in your Switcher app. This RTMP code is unique to each scheduled livestream and is not the standard one you would use to stream to multiple channels from Restream from your Switcher app. That one never changes. There’s a new one for each scheduled livestream, from what I can tell.

Click into each channel – the edit button – to add a custom image. That image will then show on the thumbnail where the live video will play once you go live.

You can also retroactively (after scheduling the live) update the image by clicking the edit button. For example, I swapped my generic blog image for the specific webinar image.

Is scheduling livestreams worth it?

Honestly, I didn’t think I would say this: But, yes. looking at the early numbers, I would give this a resounding yes.

For example, on LinkedIn, my preview post had 250 views before I even went live.

Keeping that in mind, it’s also important to include other relevant links and information. Not everyone seeing the preview post will watch the livestream and vice versa.

On Twitter, there’s no preview post but the stream goes live when the video starts. On YouTube, it’s showing as upcoming as it does on Facebook. Amazon Live shows streams (you have to set it up in the Amazon Creators app) in the upcoming streams area.

YouTube Growth Expert Liron Segev told me that livestreams might not be performing for me on YouTube because I’m not focusing on some other growth strategies first to grow my channel.

Overall, scheduling livestreams has promotional value and can make production easier. Instead of scheduling other promotional posts, it’s all in one place.