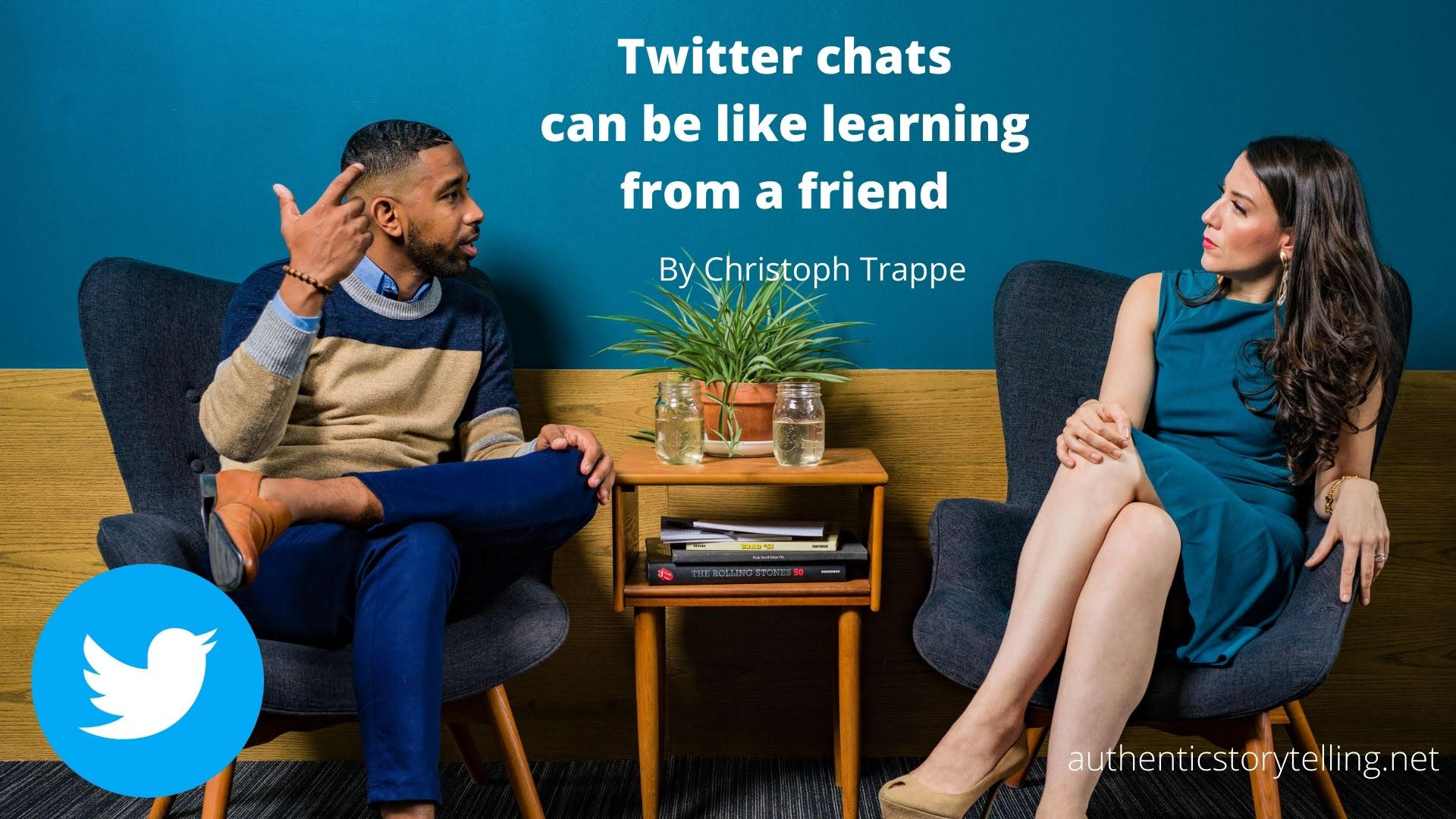 I’ve participated in Twitter chats for a few years and they’ve helped me:

Some of my favorites include #CMWorld, #TMTweetchat, #SEMRushChat and others I dip in and out of.

This article discusses what Twitter chats are, how to start and participate in one and how to turn one into Twitter moments.

There might also be a reason why your brand wants to consider starting a Twitter chat or participating in one regularly. For example, SEM Rush – an SEO platform – runs a very successful weekly chat with an engaged audience and participants.

Gretchen Vaughn launched the Toastmaster Twitter chat and joined me on the Business Storytelling Podcast to discuss what went into starting it and how she plans the chats.

It’s quite possible to participate in a handful of Twitter chats every day. But that’s probably not a good use of anyone’s time. Participating in the right ones though has many benefits.

Also, they are great marketing tools, when done right.

Twitter chats help us connect with others around a topic.

A Twitter chat is a somewhat structured conversation on Twitter around a topic that’s relevant to a particular community.

The host of a chat often has prepared questions that participants or guest experts answer. Some chat hosts blog about the chat ahead of time to get people thinking about it and the questions that will be asked. Gretchen mentioned she also likes to display the questions visually like this:

They offer real-time interactions with people. They also allow participants to connect with new people even after the chat has ended.

Chats typically stick to a specified time period. When a chat is from noon to 1, it will end at 1. Of course, people can continue chatting with others from the chat even after 1, but the official chat is done. That’s important because it gives you a stopping point – which in a never ending social media world can often be hard to come by.

Read next: Why great content marketers know there’s no such thing as catching up… so they prioritize

Brands and people can also start new chats based on need and interest.

Is it okay to participate intermittently?

I love Twitter and Twitter chats but participating in an uninterrupted hour of a Twitter chat – even the ones I love – can be hard. Not because I don’t want to give the time, but often it just won’t work because of, you know, life!

Some other participants – who have the time – don’t always like that. Whateveryou

Related: Mean things people have said to me on Twitter (Video)

Twitter chats – often hosted by brands and others – usually run an hour at a set time and often have guests who answer questions. Other participants chat with the guest, each other and also share their thoughts.

They happen all over the day and night. Some are super early, some in the middle of the day and some late at night. Since Twitter is global you can hit chats from India to the United Kingdom to the United States most weeks. I love the global connectedness, but I also have to sleep at some point.

I’ve made great connections and even friends by participating in them. Some have led to business opportunities.

Book me to speak: Christoph’s speaking clips and more!

I used to have a few on my calendar and catch some if I catch them while browsing my Twitter stream. But I hardly ever stay for the whole hour. Usually when I’m a guest I have to coordinate with my wife or team that I actually have an uninterrupted hour. Especially now where everyone is working remote.

Even with intermittent participation, you can still get something out of Twitter chats. You can still say hello, read a few takeaways, learn something and share a few of your own thought

That’s one thing I love about social media. It allows communication and conversation that is intermittently on our schedule. We decide how we want to use it. Another thing to keep in mind as well is that social media can be longer lived than just in the moment. For example, we can read Twitter chats later as well. Twitter Moments help here as well.

Gretchen said she created Twitter Moments for all chats. That allows people to read them later and they can still respond and add to the discussion at that time as well.

As of early December 2016, you can also create Twitter Moments from the mobile app. As is often the case with new social media features, it’s kind of hidden. In fact, I didn’t find it when I was looking for it and stumbled across it later while I was trying to do something else.

Then start creating your Twitter Moment from there. Add a cover photo, which you can easily create in Canva. Then add liked Tweets or search for the hashtag.

I sometimes write articles from Twitter chats as part of the COPE model. Especially when I’m participating as a guest and talk about a topic I haven’t blogged about this is a good strategy.

If you have the questions for the chat ahead of time, you could even pre-write the post and publish it at the end of the Twitter chat.

Twitter chats have been around a while certainly. If you are going to start one, make sure it serves a niche that isn’t overflowing with chats currently. Have a plan for what you want to do and keep it going for a while. Chats certainly have evolved but they still offer value in my experience.