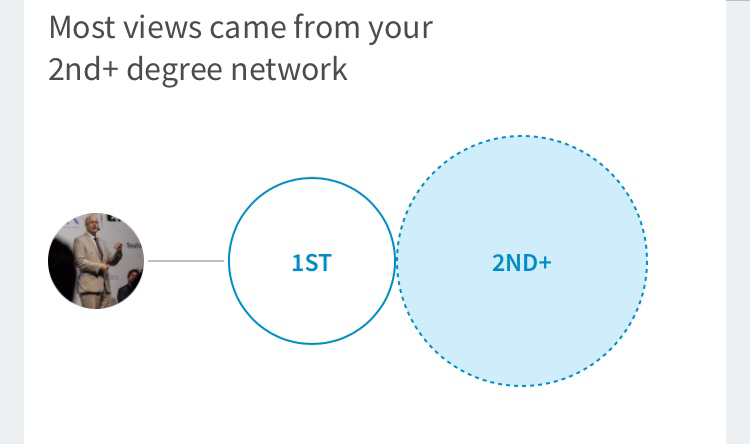 You may have noticed some kind of posts appearing more often on the top of our newsfeeds than others.

To me, it appeared that the posts that would show up in my feed at the top more often than not we’re the ones that were more conversational, a little longer and told a little bit of a story.

So I wanted to try that myself. Most of my post get anywhere from 20-120 views.

One of them was this one, which I thought was a conversational story about how feedback that’s wanted is helpful in business:

And what was interesting about this post was that most views (over 1100 total) came from connections of connections:

That’s quite different from how most of my audience for posts is often made up on LinkedIn which looks closer to this:

The immediately above graph is actually from the post below, which was also more conversational and more of a story and did get around 600 views, so many more above average as well:

Of course, I have no official now it’s off bad conversational, longer and more storytelling like posts are favored by building in algorithms but it certainly seems to help to write in that kind of format.

Become a thing I’ve noticed is that linked in articles-which used to perform really well couple years ago are no longer performing that well. Some of my recent articles have had very few views and I’m not even sure if people get notifications when they go live – which used to be the case.

Now, leaving the LinkedIn algorithm aside telling more of the story and being conversational is of course good for the end consumer of our content. It’s more fun to read, it’s not as stiff and generally I prefer content that’s conversational.

Maybe this will encourage people to tell more conversational stories. Of course, everything in this article relates to personal people’s pages on LinkedIn and not necessarily company pages. But of course, I would recommend employees to share organizational stories in a way that’s relevant and useful for all.