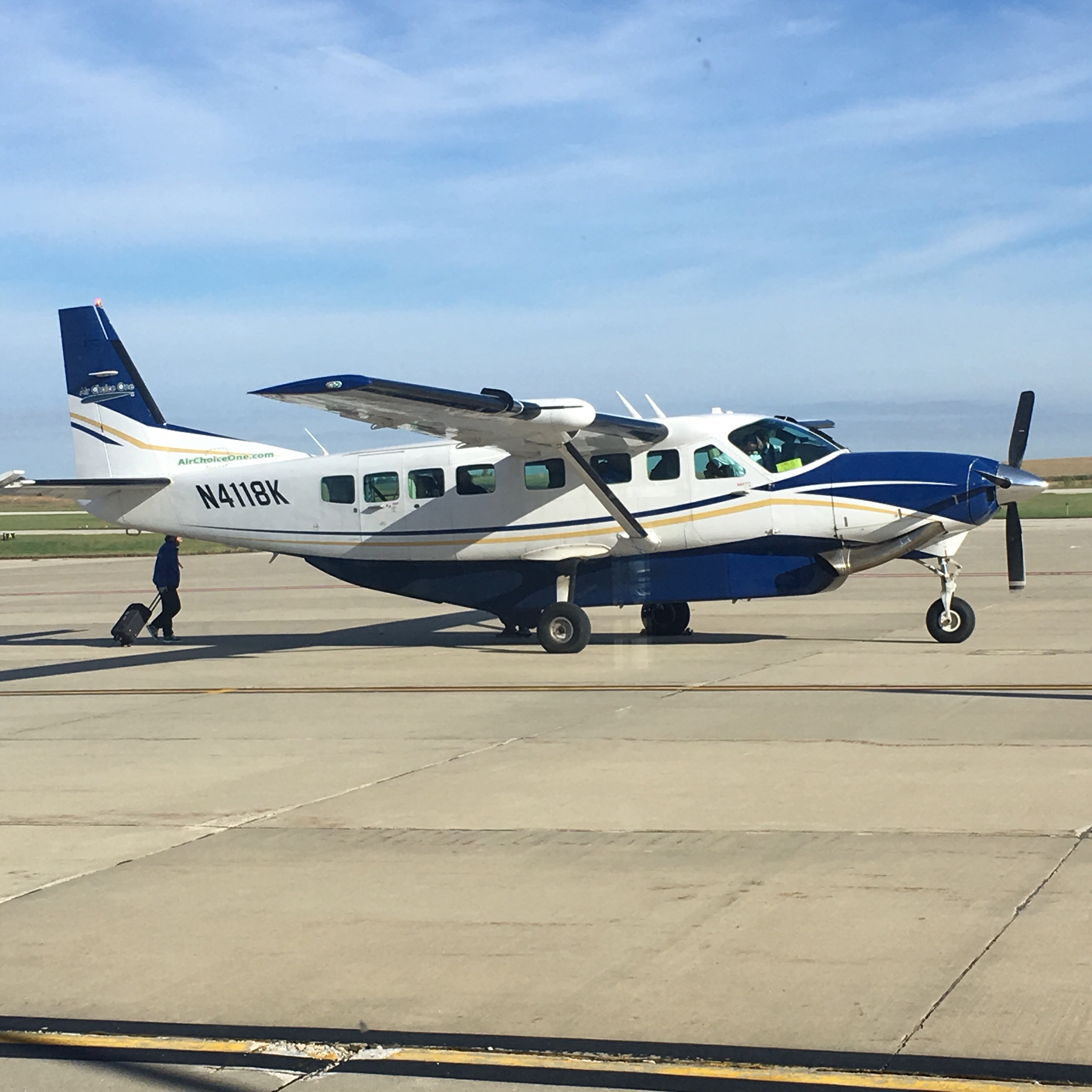 Would I recommend flying Air Choice One – a small regional airline in the Midwest?

Yes. Absolutely, but it’s not for you if you don’t like flying on little airplanes – think 8 passengers.

On my flight from Mason City (MCW) to Minneapolis (MSP) there were 3 passengers and 2 pilots.

I booked my Monday flight on a Friday night for $113 round trip so there could have been just 2 passengers. (In all it was cheaper than driving or renting a car.)

They fly out of several regional airports near my typical airport which is Cedar Rapids.

An Uber passenger one day told me about Air Choice One flying out of Burlington to Chicago. I thought about trying that but was never able to find a good option. Had I not booked a Park and Fly Marriott rate already I may try again on a Italy trip with my 4-year-old that is coming up.

In Mason City, the check in and security was quick but there’s no precheck so shoes come off and laptop out. My protein bars triggered secondary again.

“Organics are thick. It’s either organic or bombs so we have to check,” said the friendly TSA officer.

There’s WiFi at the airport so you can work, which I did.

The Minneapolis and Chicago flights out of here are connectors from St. Louis so there might be a chance they leave late due to late arrivals. Mine did.

The Cessna pulls up right outside the secure waiting area and you get on board.

Two seats right behind the pilots.

Four more behind that, with sets of twos facing each other. That could lead to nonstop eye contact with strangers?

The leg room was fantastic.

The design is older but the cushy chairs and so much extra room certainly helps with a positive experience. I can overlook the wallpaper color with that in mind.

Overall, the interior felt big – at least bigger than the cabins of bigger airlines – even their first class ones.

The pilot just turned around for the safety briefing. There’s no drink service but plenty of cup holders.

The takeoff was a bit bumpy and you feel all the winds much more than on the larger commercial aircraft flown by American Airlines and others.

Once in the air, it was fun and easy to work – even with the laptop – with all that room.

All those Iowa windmill thingies look creepy from the air. Not a fan of them from the ground either. The look that is.

The route basically just follows Interstate 35 north the whole way. And you can see the road from the air. So that doesn’t help if you are flying with somebody who can’t let the “we could have driven” faster and cheaper argument go.

It’s not actually cheaper to drive by yourself. When with more than one person it depends on who is paying for the trip. If it’s one company, it wouldn’t be cheaper. For one person it is cheaper or about the same cost. Of course that depends on the dates and timing too. Always run the numbers. No assumptions in travel.

So, I’d fly them again and the Mason City – Minneapolis route specially might be a nice way to position myself to fly on a cheaper round trip out of Minneapolis to somewhere. Keep in mind to leave enough layover time. The connecting flight would be a separate ticket so they won’t rebook you if you miss it.

How to book Air Choice One?

You can on their website and find them on Google Flights when you add “nearby airports” in other searches.

Booking on the website worked as expected. Online check-in is apparently available but I couldn’t get it to work. So I checked in at the counter – like the good ole days. Ha. I hardly ever do that!

Does it earn us points? You know me. I want my points but as far as I can tell there’s no mile accrual here. There are no partnerships with others to earn American Airlines miles while flying Air Choice One.

The flights are short anyway, so it wouldn’t be a ton of miles anyway.

So if you have the chance try these smaller carriers. Cape Air is another one that flies around the Boston area and has a hub at St. Louis.

It’s fun, gets us to where we want to go and why not look for new ways to accomplish the same things?