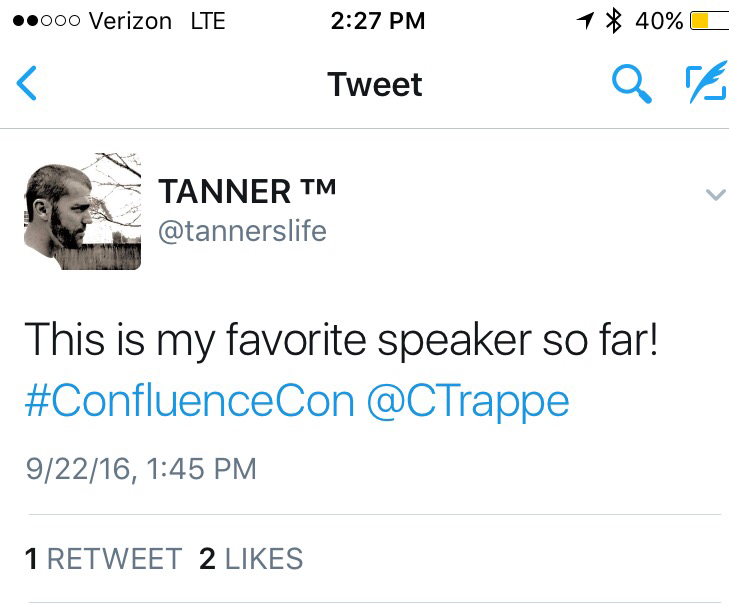 My speeches have now twice trended on Twitter in the cities where I was giving them.

The first time was Mumbai, India, in 2015, when I was giving a keynote at a blogging conference. Every slide had my Twitter handle on it and I actively encouraged tweeting during the talk.

“Please make sure to tag me so I can retweet and respond later, too.”
The second time was Oklahoma City, USA, in 2016 when I was speaking at a marketing conference.

At this conference, I actually offered a reward to people tweeting in the form of a giveaway of four copies of my book.

I then picked four winners and they received free copies of my book.
After each talk, I tried to respond to every single tweet and also retweeted many. That didn’t help with the trending since I was actually trending while giving each talk. But people told me later how much they appreciated that I responded.

Easy breezy, at least in theory: Give them something to tweet about. And make sure they know what your Twitter handle is, which is why speakers should always have it up on the screen. During the whole talk. Not just during the intro.

So as you speak, be quotable. Give good soundbites. Be memorable. Jokes often get tweeted.

“Being a trending topic helps you share your story.” – @ctrappe #contentmarketing

Once I made a comment about twerking – you know that Miley Cyrus move I shouldn’t ever do – and that was the most tweeted quote. Some people were even demanding twerking. Won’t happen! But, that got some good interaction, as you might imagine.
Sometimes call out tweets – without being too obnoxious about it. Sometimes, I say: “That’s a good tweet. I’ll have to remember to tweet that later.” Some people end up tweeting it as well.

Both times I ended up trending, being a trending topic wasn’t even a goal. But the goal was to get people to engage and share their thoughts and – as applicable – allow their networks to hear about authentic storytelling content marketing.

Seeing the trending topic notifications is cool though. I hope it’s a sign of relevance and impact even.

We make an impact when others join us. It’s nearly impossible to do as a lone ranger.