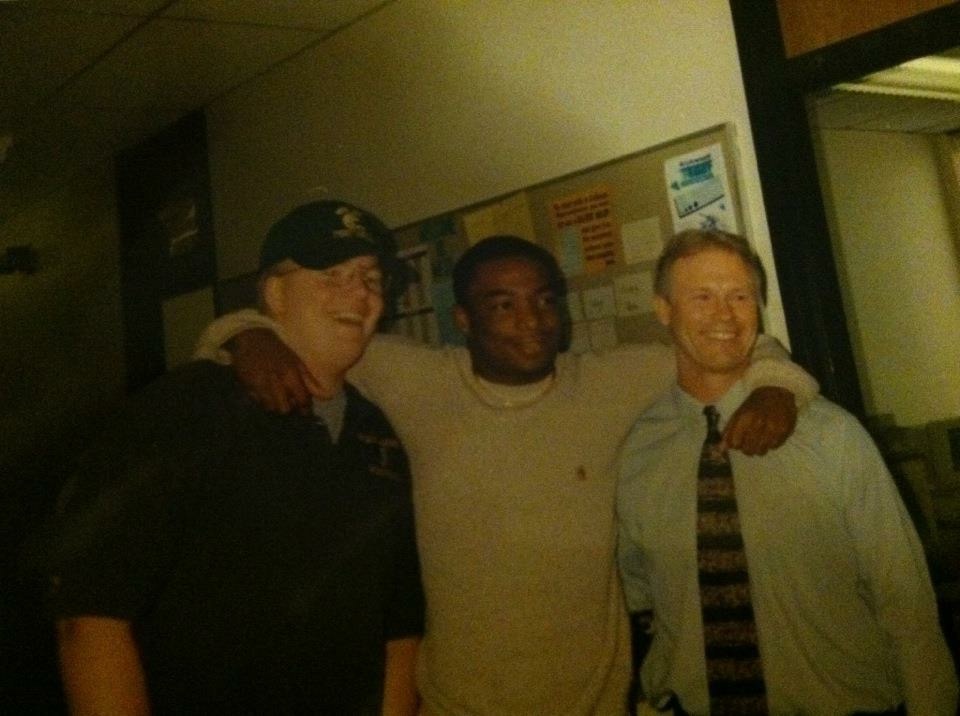 This week the 2-1 Iowa City West High Trojans are prepping for their game against Dubuque Senior and I’ll be joining them for their pre-game meal and give a rah-rah-rah talk. I went to Iowa City West in the mid-1990s, was on their state championship team in ’95 and later earned an Iowa football scholarship to become the first German under 18 football player to get a top division offer.

I promise I won’t wear this shirt:

Honestly, I don’t even know where it is. LOL. But either way, there are plenty of stories to tell. I just have to think about which ones I can fit and that might be most relevant to this year’s team!

So how did I end up at Iowa City West to begin with? I came to the United States from Germany as a foreign exchange student. Coach Reese Morgan (now an Iowa assistant and pictured above with running back Carlos Honore in 1997 with me at signing day), at first thought I was going to be a kicker, He heard Germany and soccer.  Really, I hadn’t played much soccer in my life and started playing American football with the Dusseldorf Panthers in 1990.

Related: Note to self – Enjoy the little things (mentions American Bowl in Berlin in the ’90s)

The foreign exchange program got us here late and football summer camp was already over so I didn’t play all that much early in the year, but got a start or two later in the year. I started all of 1996 and got my scholarship offer early that year. I accepted right away but we didn’t announce it until later so it wouldn’t be a distraction. If you know me, you know keeping that secret was a challenge!

It was fun but also stressful. Playing football in its home country, learning English and adjusting to American food. I gained like 40 pounds my first year here. Not all muscle either!

Some of my teammates headed to the University of Iowa with me. Many were done playing football. Some I reconnected with later on through Facebook or LinkedIn. Every once in a while, I run into a former teammate. Unfortunately, the most read article on my blog was my article about former lineman and teammate Tony Beminio with over 14,000 views. Tony was a police officer in Des Moines and killed in the line of duty after an ambush. Read my story here: I cried today because a high school teammate was ambushed and killed.

At West, I remembered the Friday afternoons sitting in the gym, headphones on, prepping for the Friday night game.

I would visualize play after play in my head. Taking the right steps and anticipating defensive reaction started as a mental process for me. I still use this technique when I’m speaking at a conference or a meeting today. I learned that in football. No idea where and if kids learn this outside of sports.

Another new talk example: I was super nervous holding my first workshop in German!

I also learned how to make it through the hard times. See, things were not always great. I was being made fun of for my accent, which I’m told is much weaker nowadays. I would just get the next defender back by pancaking them! 😉 A pancake block is when the defender ends up on their back. #Boom

At one point, I kept track of how many pancake blocks I had during games. That’s another thing I learned from football. Visualization is great, but review of performance after the fact is so useful!

Let’s watch what we did well AND not so well. And then talk about it. Businesses should do some of that!

Read next from my gridiron stories: When I was publicly demoted at Iowa

Interestingly, in the last few years here I would not have been able to attend West High at all. They were overcrowded and as far as I know weren’t accepting foreign exchange students at all. Today, I would be going to the new high school that was built in North Liberty.

Today, in case you are wondering, I’m a United States citizen, married and we have two daughters. One plays competitive fastpitch softball with two former Iowa teammates’ daughters.

Small world. I’ll leave my world okayest motivational speaker shirt at home and just share some stories and return the favor to the West High community.

Without football, the connections and lessons, who knows what I’d be doing today!