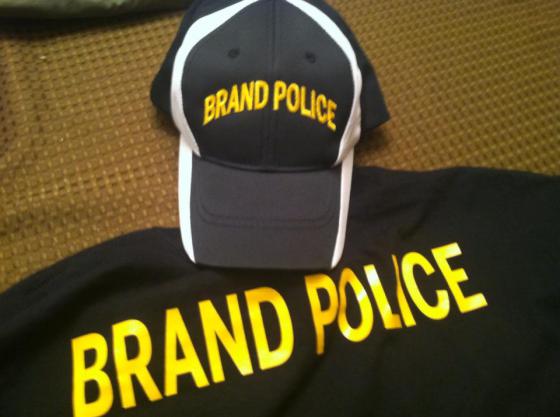 I don’t go too wild for Halloween but I have worn or at least attempted to wear a marketing-related “costume” since 2013. Here are pictures and ideas for you below!

The year of 2019 was the year of audience development. Converting unknown audience into known connections helps us deepen that relationship.

Why not go as audience development? Easy breezy costume:

Buy those “Hello my name is” name tags on Amazon.

Asked my kids to write names on them:

Then put empty ones on the front of a shirt. That’s the unknown audience:

Then, of course, we convert those unknown people to known audience members. Now we know their names and the known audience is on the back of the shirt.

For 2018, I was planning on going as a display ad. ESP Three in Cedar Rapids took one of my actual digital display ads and printed it at a really good size. Here are two pictures to give an idea of size:

My original idea was to cut out the face and then I could stick my actual face through there to really go as a display ad.

My 2017 costume came a bit early. I currently work at home so people can only see it online anyway. My idea was to go as a ghostwriter this year. I tried a homemade costume but really it was a good effort but I (or anyone) wouldn’t be able to wear it for any amount of time. I do think the 3-year-old enjoyed it. Here I’m “interviewing” her. ⬇️⬇️

Unless you want to cut holes in an otherwise good bed sheet I’d probably recommend buying a ghost costume on Amazon.

Side story: Yes, it’s totally okay to have a ghostwriter but they have to talk to the person the writer is ghostwriting for.

In 2016, I decided to spend less money than in previous years and went as White Hat SEO. I bought that hat on Amazon for under $10 (affiliate link) and called it good this year.

In 2015, I was going to go as a hashtag, but actually ended up being out of the country on Halloween. I had already bought the costume before my trip was planned. (You can buy that costume here. – also an affiliate link to Amazon.)