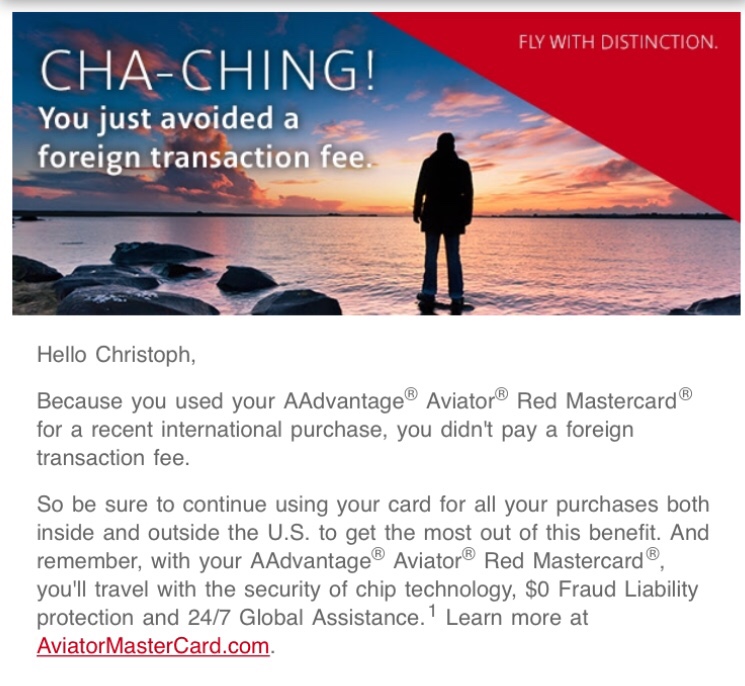 Oftentimes email marketing is done to push the consumer down the marketing funnel and closer to the purchase. That’s a relatively accepted strategy and often one that can drive consumers to annoyance when they get too many emails.

But there’s also a type of email marketing that isn’t about making another sale but it’s about tying an already existing customer to you even more. It reinforces that a previous buy was a good decision.

When down well I would even say that this is customer-focused.

Example that hit my email inbox was from my Aviator Red American Airlines Barclays credit card.

I was traveling in Europe for two weeks and of course I used the credit card for most of my purchases – though I still had to get cash for some expenses because not everyone takes credit cards in Europe or India for that matter.

Once I returned I received an email from the credit card company and it basically reminded me that I did the right thing by using the credit card because there’s no foreign transaction charges:

I thought that was brilliant because it really padded me-the consumer-on the back for doing what saves me money. I actually had a credit card one time that did charge foreign transaction fees and that does really add up when you go on a trip.

This is also the credit card that did a fantastic job getting me to sign up through persistent but also well-timed digital marketing. See, when you’re flying on planes in the United States they often try to sell you on signing up for a credit card. The flight attendants walk around and hand out paper applications.

Honestly, I’m not much of a paper guy and I really never see anyone grab one of these applications. However, I did sign up for this credit card while on a plane but I never took the paper application.

As I was logging into the inflight WiFi I was greeted by these screens:

I still had to get the code from the flight attendant and I assume they were still getting credit for the sign up but it seemed simpler on the online sign up with immediate approval.

At the time of this offer I got 60,000 bonus miles after making just one purchase and pay the annual fee of $95. A few weeks later they were offering the same credit card for 50,000 bonus miles and a little while after that they weren’t offering any miles to people who were signing up on board.

So whomever is doing this credit card’s email marketing and digital marketing in general does know what they’re doing and are doing a great job. ⭐️⭐️⭐️⭐️⭐️

And while I don’t need anymore emails the reminder that I save money by using the credit card came at a time where I appreciated it in the moment. ?

Sometimes marketing emails that aren’t selling anything new but reinforce a good choice made in a previous buy are worth the time to add to your digital marketing program.