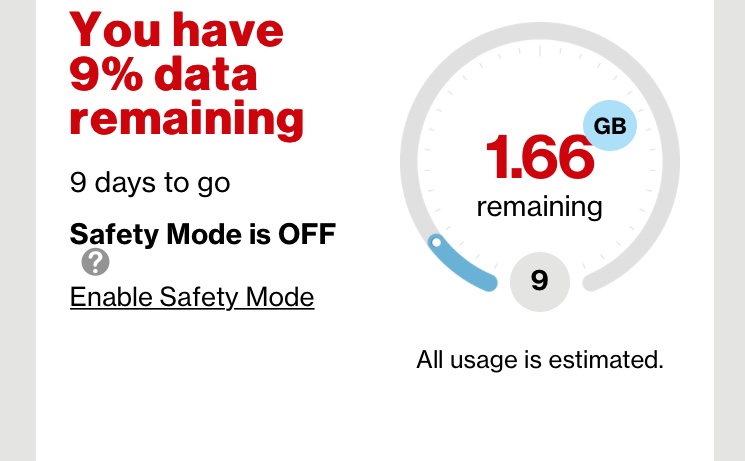 You’ve heard it and I’ve heard it. Video is the future. Blah blah blah. It’s not the future, but it’s here. And it’s not replacing the written word! You might relate since you are reading this! 🙂

Video is great, but there are issues! Live audio is another tool. Virtual reality is hard because few people have the headsets.

But here’s the problem with all these new multimedia ways of storytelling! They eat up my data, and yours, and all consumers’.

Streaming a video takes way more data usage than reading an article, even when the article has some annoying fly-in videos that you will accidentally click on and that the ad director will share as success! “Everyone clicks on it. We think it’s by mistake, but the numbers are huge!” #snark But seriously, all this multimedia content takes data. and sure, there’s WiFi in many places, but apparently less so than I thought. Here’s how I learned this the hard way.

Slightly related: My list of best and worst WiFi in airports around the world!

Accidental clicks because of bad #ux is not success! – @ctrappe #digitalmarketing #contentmarketing

At home, we were running out of data quickly and sure we are using the data allowance between three people – my wife, my daughter and myself – but running out doesn’t happen often. We even had carryover before!

“We are ALWAYS on WiFi.”

That’s my perception, at least. And then I got the notification from Verizon that I only had 10 percent of data remaining  with 10 days to go. And that data that was left was rollover data from last month. Oy. Good thing they roll that over now. I chatted with Verizon to find out what’s the deal and stated that this must be a mistake. Their response:

Their main point: Media files now are larger than they used to be! So consume same amount as before but it’s all multimedia, you’ll run out of data quicker. Makes sense, conceptually speaking.

Verizon also mentioned that when WiFi cuts out or is overly weak, the phone will just hop over to a wireless network. Now, I don’t believe that the WiFi networks were this weak that my wife – who hardly ever is off WiFi- had more mobile usage than me, and I travel, but okay, we’ll see if this repeats itself next month.

If Verizon is correct that we are consuming more rich media even though we aren’t consuming more content overall that is a problem and something for content producers to keep in mind.

Video will be more content on the web, just by it being larger files! – @ctrappe

I know there’s still some of you out there who think that mobile is for on-the-go only. Even though I disagree with that assessment, if you believe it, you probably don’t want to serve up 4K videos only for your on-the-go audiences.

Read next: How I show 4K video on my iPhone!

It’s not super difficult to buy more data but we already have the biggest plan and it carries over unused data from the month before. But, this is not something that would have ever crossed my mind as a content creator and with all these “experts” yapping in my ear that I need to do more and more and more multimedia it’s especially easy to not catch.

About 60 percent of visitors to this site come from mobile devices, but as far as I can tell there’s no way for me to see whether they are on a wifi network or on wireless. I’d say the higher your mobile audience, the more likely it is that at times they are on the go, even if they are mostly using their phones while on a wifi network.

Why is that my problem?

Some content executives may even say that this isn’t their problem at all. Why would they care if their audience didn’t get a plan with enough data to watch all their state-of-the-art videos?

Well, they maybe shouldn’t, but here’s the problem: The second people get the notification saying that they are almost out of data they likely won’t watch your 4K video while on the shuttle bus to the rental car center at the airport. For example.

Read this if you travel: 6 travel hacks that keep me sane on the road!

What’s the answer then?

I would never say to do less multimedia. Just be smart about it! Integrate it with your overall storytelling. Here’s an example from a recent active shooter training that I was part of and that the Buildings website covered.

First, there was the article. Words, words, words.

Then within the article there was all kinds of video to watch, including 360/virtual reality:

The final piece of the package was a podcast:

Now what’s nice about that is that I can consume the content in a number of different ways. Certainly, the podcast offers slightly different content from the words and so does the virtual reality video.

But, if I’m a home on my WiFi, I might consume everything. If I’m riding the L train in Chicago I might just read the copy. If I have enough data left, I might download the podcast to listen to later. If not, I might just make a mental note. If I’m on a tight data plan, I likely won’t listen over the wireless right that second!

Using all the different types of content asset can work and especially when they are used in concert with each other.

“Our content gets better when we understand our audiences.” – @ctrappe

This article was first published in November 2018 and updated in December 2019 with a podcast.