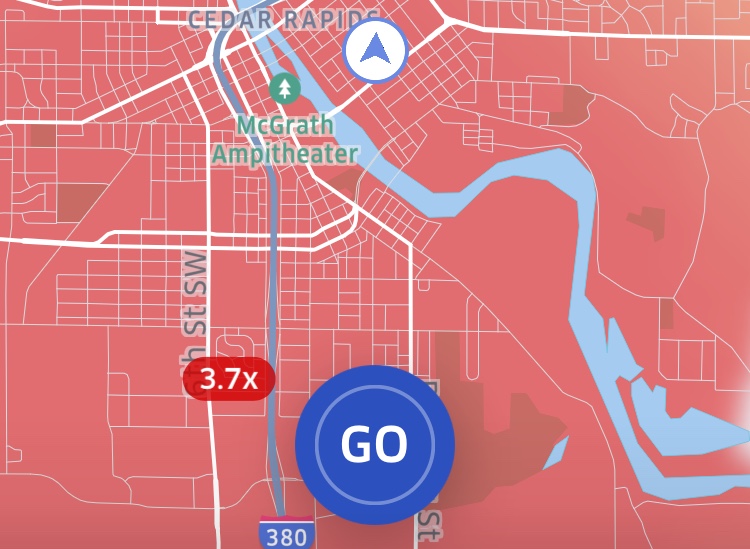 Uber released a new driver app in late 2018 to serve their drivers better – was one marketing statement I saw.

But does it actually serve the driver or the corporation?

Read now: Stories from the rideshare back seat

At first glance, the updates seemed mostly superficial and it appeared one of those updates that happens because somebody decided it was time for one.

But there are also some real usability strategies in play here. Keep in mind I haven’t talked to Uber and this is based on my experience and observation.

My background as a digital strategist here!

The actions Uber wants you to take are easy to take. Going online is one click, while going off is two.

Off is on a secondary screen:

When on the home screen the app keeps telling you that it’s finding trips for you.

Of course, it’s not really finding trips nonstop. There are only trips when people request an Uber. But psychological this is brilliant.

Stay on. We are looking to help you make money.

When you haven’t gotten trips in a while it’ll change the saying to that you are now in a busy zone-despite no surge listing – and that you should be expecting trips soon:

There also seems to be increased fare areas (surges) happening all the time – more than before. Every time I open the app, there’s a surge happening somewhere. That means increased pricing because a lot of riders are checking the app.

Personally, I find it harder to check how much you made on a trip. That’s more clicks than before. And it’s even more clicks to see how much the riders pay. Of course, that can be frustrating to see when the driver gets less than half – which might be why that’s hard to check.

Driving with destination mode on the app now gives verbal directions – which is new. That makes sense from the company’s perspective as it’s easier to send rides your way if it knows your route and not just the destination.

We have to remember that digital strategy has goals – or should. Goals should be tight to business goals. See, whether or not drivers like the app is irrelevant. As long as they keep using it. The more drivers use it the more money Uber makes!

Lindi Wheaton with The Pixel, disagreed with my statement. She’s made a good point:

I think I’m going to have to disagree with your statement, “See, whether or not drivers like the app is irrelevant. As long as they keep using it.”

I think all user experiences matter from the person driving to the passenger. If they don’t like the app users get irritated or frustrated.

Lyft could come in and create an easier, more initiative interface. I don’t know much about Uber or Lyft’s user/target market but to me the customers are in a fast pace world and want easy yet effective features to make traveling from point A to B easy and relaxing. If the app is easy for the passenger/consumer then the drivers such as yourself will have more customers/clients to pick up and drop off (win-win).

The app could be a useful tool for everyone. I’m from a world were all users matter and those users/numbers impact percentages and percentages impact ROI and ROI means I don’t make as much money as I wanted to.

I do feel that the design is creating some of that stickiness that will keep drivers to keep it open.

From that perspective it’s great design and development. I’ll be interested to see if it helps drive business goals!

You heard me talk about always being customer-focused including in our book on the topic. And even though the app isn’t perfect for drivers it can have a positive impact on riders. The more drivers the better for riders too. So from that perspective it is customer focused – though the customers can’t even log into it.

As long as drivers are happy with their driving and the pay, it could even be a win-win.