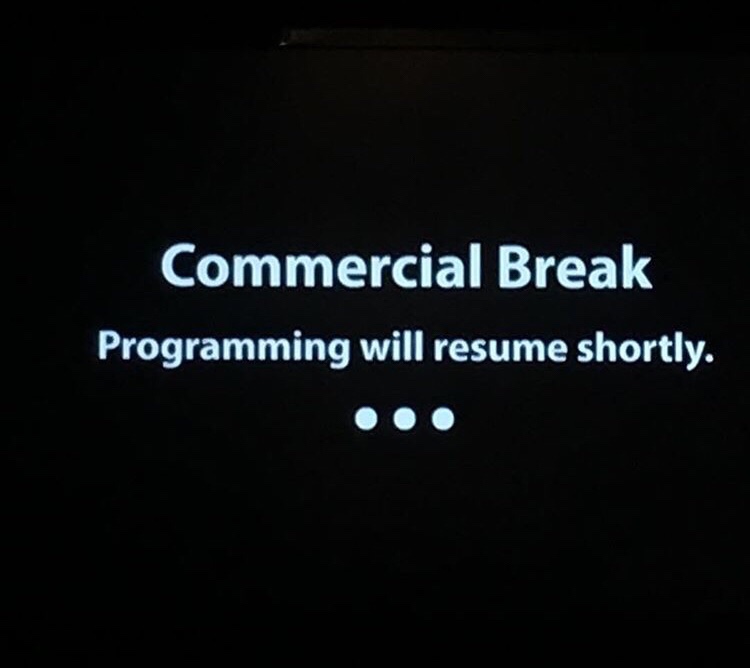 When I finally got the Iowa football game to work on my Roku I was greeted by this screen:

I thought I found the wrong channel. The game wasn’t on here. Ugh. But I was wrong. As it turns out this was a place holder for the time when commercials were running on regular TV.

I see those often. Sometimes they read:

ESPN on Hulu and Sling has similar screens. As a consumer it’s weird as much as I prefer the fewest amount of commercials as possible. Maybe they could add a counter to let us know when the show will be back on! An idea.

Local TV stations being streamed on Roku and other devices have similar tactics. They run the same group of commercials over and over. Why? Because those companies paid for it! Seeing the same two commercials four times in one block gets old but if they paid for it, that’s how it is I guess.

There’s no such thing as “value add sales.” And certainly sales should be in quotes because if you aren’t getting paid for it it’s not a sale! It’s a gift. I also don’t think it should be consider a loss leader.

Nonetheless, over 10 years ago sales people were telling me they were selling print ads and adding in digital things for free. “It’s a value add.”

As I’ve said many times, including here people don’t pay for the stuff they get for free.

And value add implies that it only is valuable when it’s sold in addition to the other thing. Of course, we know that this isn’t true for digital revenue streams and they do just fine on their own when used correctly.

So the more I think about it, I applaud the TV people for not giving away those commercial spots as value adds. It’s just fine for them to hold out – plus TV commercials seem to be making just enough money right now.

But when more and more people move to other channels, the advertisers will have to buy those slots. And you know people will move. They already are. When that happens advertisers will want to reach them their – is my prediction.

When the Iowa game wasn’t showing in Iowa, I saw tweets from people trying to watch on Hulu, Roku, apps, the PlayStation. When I was a kid, you could only play video games on the PlayStation.

There are probably some personalization sales tactics available on those channels. If not today, at some point there will be. So, it’s not an add on! It’s something new, different and maybe more measurable.

Of course, it also depends on the goals. Are we in it for the long game or the short gain.

If a value add “sale” can make us a boat load of money – or at least a kayak – and we are about to leave the industry this can be a viable tactic for that one person.

But it’s not helping the industry long term. And that’s why I love what the broadcasters are doing.

Sell commercials on established channels. Hold out on emerging ones until advertisers see the need to buy the space.