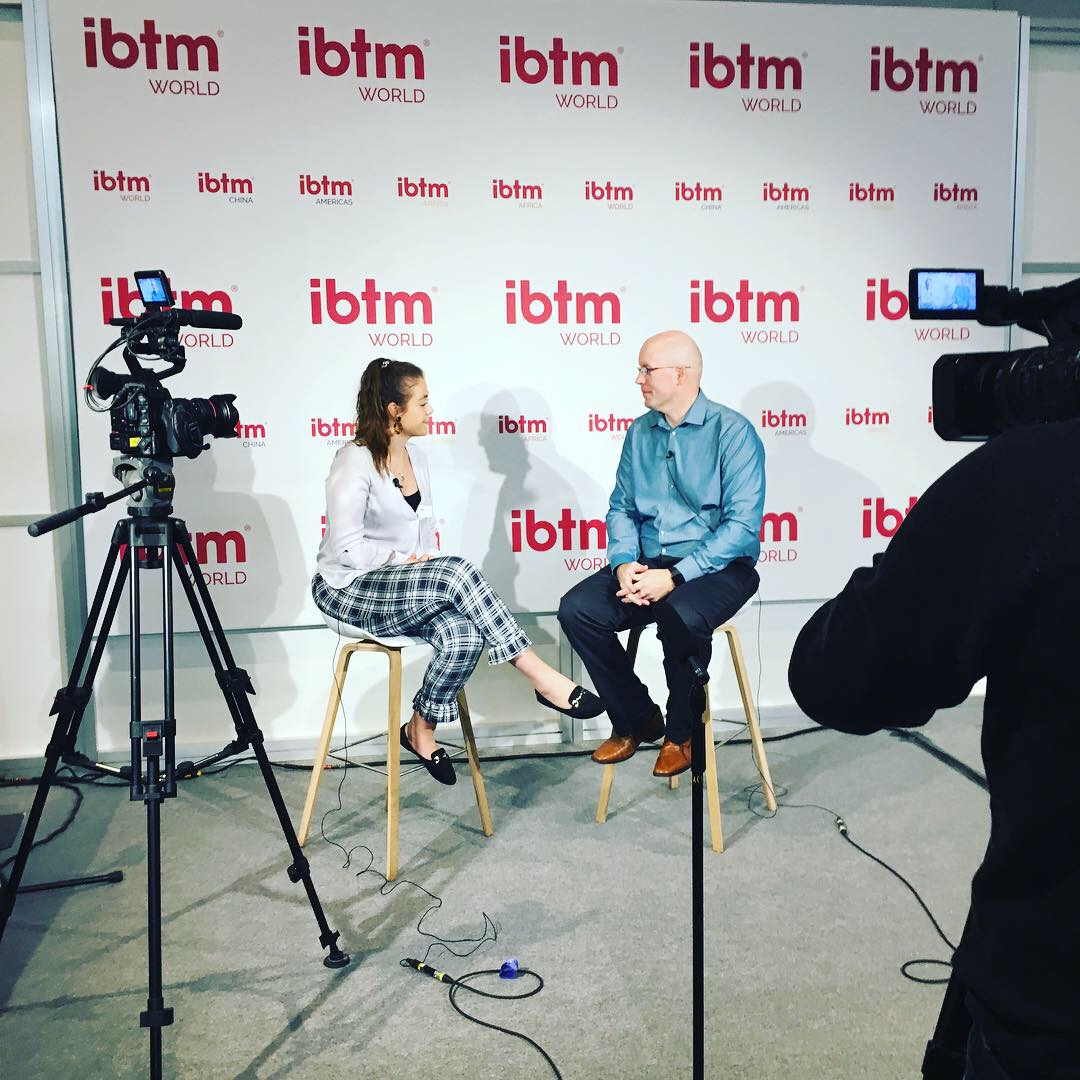 When I spoke in Berlin, I had emoji pillows all over the room and pointed at one in the corner.

That’s the writer who never leaves the office. Think they get any unique stories?

Some, but not as many as the writers who are out in the field.

Sure, reporters and content marketers can call people and get quotes, but the only way to offer analysis on something in your field is you have to experience it.

In November 2018, I had a crazy two-week back and forth trip between North America and Europe. In 14 days, I visited four countries, survived driving through a terrible snow storm near Chicago and slept at home one night.

But I was productive, spoke at a conference, tried a few more virtual reality videos and filed dozens of social media photos and over a dozen blog posts.

Without travel I wouldn’t have been able to file the stories. I can’t share the experience about things without actually experiencing them.

Sure, I could share some facts about Barcelona by googling facts, but the highly unique stories come by going and finding them.

When I was a rookie journalist the best stories came out of reporting trips out of the office. No wonder editors shoo writers away.

Sure, there were hacks to get stories over the phone and even email and nowadays social media. But the details are gathered through observation and also building that relationship in person. I remember interviewing moms of murdered children, people in jail, witnesses and even the last Iowa death row inmate.

Those stories can’t be done over the phone. That doesn’t mean I’ll disregard phone reporting.

But there’s value in hitting the road and reporting from the scene. Of course, today, my “reporting” hardly ever is the kind of reporting I’ve done as a print journalist. It’s closer to observations with a spice of analysis or opinion.

Yet the same concept applies. I can’t even give that without seeing it. I can’t do VR video without being there either. Now, what’s interesting about that is that maybe VR interviews aren’t even the way to go, but it might be too early to tell. I kind of like the concept.

So how do you get to the places for the stories? Some ideas:

Find them nearby. There are stories everywhere – just not that often in our offices.

Yup, I know when to upfare, use systemwide upgrades or completely book on miles. I also know that multi-city hops and stays through Sunday are often much much cheaper. So I look for those options.

In 2017, when I was speaking at the Content Marketing Forum in Berlin I also wrote about the city’s history, Uber in Berlin and running into a demonstration.

That’s three stories just top of mind right there. There may have been more even.

When I am at a conference, it’s easy to find stories. Some are worth more to my readers than others of course.

When I was a police reporter it was often the only way to catch witnesses for a story at the scene. Sure, they might be listed in a report later, but later was usually after a deadline.

So anyway, the reminder for corporate content marketers here is that to tell stories we have to either experience them or get them from the frontline staff who is experiencing them.