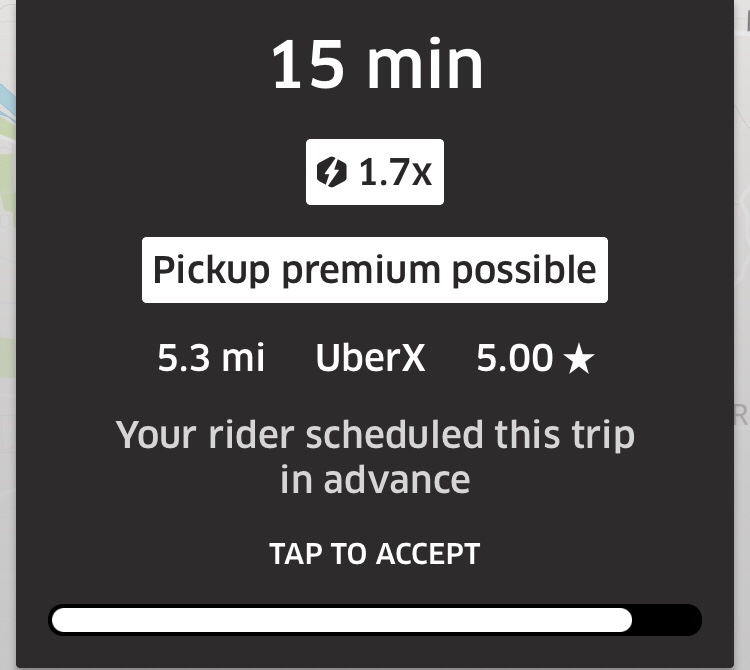 Both rideshare apps allow riders to schedule rides in advance. This is a great feature in the Uber and Lyft apps:

It works similarly in Uber. It’s a nice feature in both and gives you peace of mind as a rider, but there are huge differences and for the rider scheduling in Lyft is far superior than Uber.

Lyft allows drivers to accept schedule pickups anytime after they were requested. So if somebody requests one now for 12 hours from now, a driver can accept it in seconds and the rider can tell that somebody accepted it. Granted, the driver also can cancel the acceptance, but another driver can then pick it up. I’ve found that drivers often show up super early and I feel bad that I’m not ready. “Your driver is here and will leave in 20 minutes” was one I saw the other day. Whoa. Better tip well!

Uber on the other hand pushes scheduled rides to drivers when it’s time for the pickup. So there’s no advance notice. The driver ping does say “Your rider scheduled this in advance.” But drivers can’t accept it in advance. As a driver, I’ve noticed that riders in my town also forget about their scheduled rides and the no-show rate is high. Ugh.

So as business traveler, I would highly recommend Lyft scheduling over Uber. It’s by far better for the rider. For now.

Read now: Tales from the road: Stories from my time as an Uber and Lyft driver

I used to rent cars 100 percent of the time when traveling in North America. As of mid-2018, I’m even still President’s Circle with Hertz! Then a few years ago, a client suggested I take Uber to avoid wasting all this time looking for parking. Good idea!

I started using Uber more and more for a number of reasons:

Funny story on that last item: On a trip in D.C., the Uber driver ignored the app’s directions. See:

Read now: How to make money driving Uber and Lyft

I called her on it and she explained that the directions were bad and would take us much longer. “I grew up here. Trust me.” OK, but I just met you. ??

To be honest, those directions look strange anyway. Based on that we kept moving and didn’t stop that much (relative to Washington D.C. traffic) at least it felt like progress. I was happy with the service. I would have given her a tip, but the Uber app didn’t that option then. It does now and I would highly recommend that you tip drivers!

On another trip to Vegas, the Uber driver and I chatted about that tip thing. He mentioned that when he drives for Lyft their app has an option to add a tip. Back then that was a differentiator for Lyft.

What do you mean –  you drive for both?

He explained that he has both apps running and will accept the best ride request. Once he’s on a trip he turns the other app off. It’s a common thing, according to The Points Guy Maybe the drivers aren’t a differentiator if they drive for both! I do the same now when I accept rides on my way out and about.

I actually think it’s brilliant to run both apps as a driver. And this whole discussion prompted me to install Lyft and I have been using it ever since as a rider.

The app looks super similar to Uber with similar functionalities. The differentiators are minimal, though Uber seems more expensive at times.

I can also earn Delta points with Lyft rides. Uber currently has no partnerships that I know of.

My perception also is that Uber gets much more negative news coverage than Lyft. Rightfully or not, what people (including the media) say, influences our stories of them. That’s why I started using Uber to begin with. A few people independently of each other recommended it. The media was celebrating the company too.

A couple recent more negative stories that come to mind:

In contrast, I can’t remember seeing any negative-leaning Lyft stories.

Overall, the Uber model was an improvement for transportation customers. (How it all started can be read here.)

It’s also an example that the stories people share about us will help us win or lose.

I would have never considered Lyft had the media and people not talked about it as much as an alternative to Uber. Just like I wouldn’t have started with Uber without people talking about them. There is another lesson here to be learned:

That’s hard to remember for a chatty guy like me! But case in point: I was speaking at a conference in Lisbon, Portugal, and my Uber driver said that the only reason people there – including him – knew about Uber was because taxi drivers were protesting against it.

“I started driving because of that protest. I had never heard of Uber until then.”