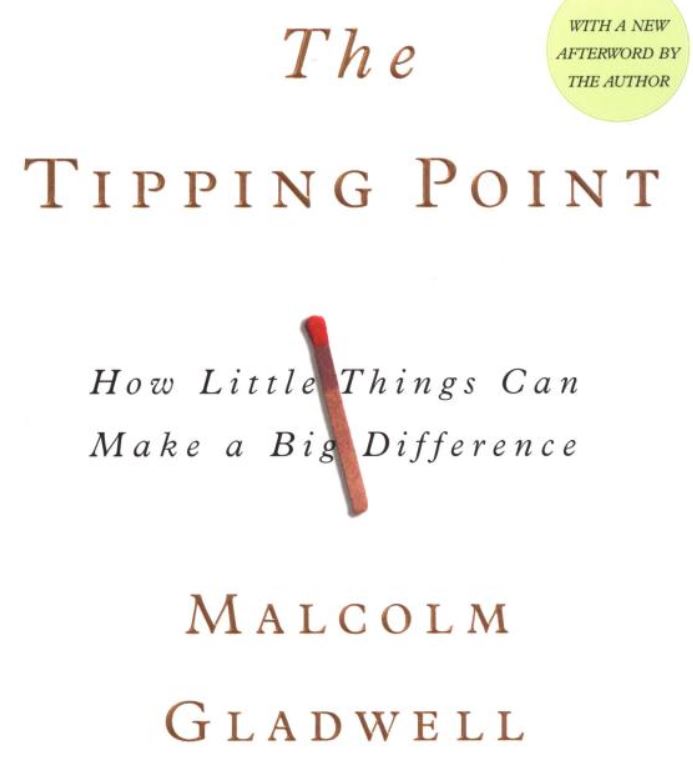 It’s a dream for content marketers: To get our content to spread. To be sticky. To be contagious. We want people to be sick with Fear of Missing Out. And then of course all that needs to lead to sales of some type or another – in the business model. I feel like I’m in a hospital here. Where is my mask so I don’t get that blog post? LOL.

The problem of course is that everyone is now running campaigns everywhere. Companies create products that are slightly different but are they better? I do know that my Alexa device doesn’t play nicely with my iPhone’s Apple music, but is that a differentiator to try to tie me to Amazon that way? Probably not. I have hundreds of songs on my Apple Music! Does Amazon even have their own phones? No idea, I’m currently relatively happy with my iPhone – even though it’s a 6s, so not even the newest version.

But Amazon does sell books and so I got Malcom Gladwell’s “The Tipping Point” to read over the holidays while I had some days off.  The book talks about when products start taking off – when they start tipping so to speak.

And it really comes down to these things:

That sounds simpler than it is. Please do get the book and read more in-depth about this there. In the meantime, here are some of my take-aways for content marketers.

The law of the few

This refers to that a small number of people usually work on the biggest impact. That applies to 20 percent of beer drinkers driving 80 percent of all the beer, one person traveling around the world and spreading HIV and a small group of people starting another sexually-transmitted disease quickly.

This isn’t a health blog – usually – but many examples are health epidemics. But this also applies to creativity. Many hit songs were written by these two. The iPhone was created by a few. Same with Google. Facebook. Etc. etc.

“It’s not the masses that drive change, it’s the few.” – @ctrappe

Paul Revere, as mentioned in the book, rode his horse to cities near Boston to warn people of the British attack. One person is definitely the few!

A few people can have an impact, which I love to hear, because I’ve never seen committees on top of committees and then adding sub-committees to the mix drive very many results. It also doesn’t mean you have to get buy-in from every single person under the moon to start having an impact!

The stickiness of the message

There are all kinds of books out there on being sticky in marketing and that’s fine. That should be a goal and after all if nobody pays attention to our marketing, have we done our job? Likely not. But marketing is becoming more and more difficult. The tipping point won’t be reached by all!

The competition is unbelievable.

The channels are constantly changing.

The landscape is crowded.

And what’s interesting about Gladwell’s book is that he doesn’t really talk about marketing teams spreading the message. It’s others who do. I also talked about that in a social media webinar with interior designers.

When social media first took off we were in the organic era. A brand would post something and once they had a decent following that content could certainly spread. That era also depended on word-of-mouth sharing, of course. And word-of-mouth, whether digital or analog, is still an important way to get our message out.

In the paid era of social, brands have to pay to get their content seen. This isn’t a huge surprise, of course, as Facebook, Twitter and others all want to make money! And, as the Russians have proven during the United States presidential election, social media ads do indeed work!

I’d love to say that’s it’s always been the audience era but what I mean here is that the sharing of content from our audience is becoming more and more important.

Read more here on the power of others sharing our content!

The power of context

Context matters. What problem is a product or service solving for me as the consumer, citizen, whatever role I’m currently in? If I don’t know the context, it’s hard for a message to be sticky, memorable or we might just gloss over it.

“Context in storytelling helps us understand why a business matters to us.” – @ctrappe

If you are a content marketer I would highly recommend this book – at the very least as a refresher to what has worked in the past and what we can try again today.

“Think of #contentmarketing as a lifestyle and not single campaigns.” – @ctrappe

For the few to make an impact, they have to keep going. Often they don’t know that success is just around the corner, but they won’t get to the corner if they stop today!

The #nostopping concept is especially hard for some leaders who only want to do things that lead to surefire success! That concept – if it ever worked – works less and less. It’s probably too risk adverse.

So find your niche, keep going and try to find your advocates and spread the word on every channel possible. And fingers crossed you’ll have the little bit of luck that’s needed to get across the tipping point!

Looking for a social media influencer to spread your brand message or teach your teams how to? Check out this page!