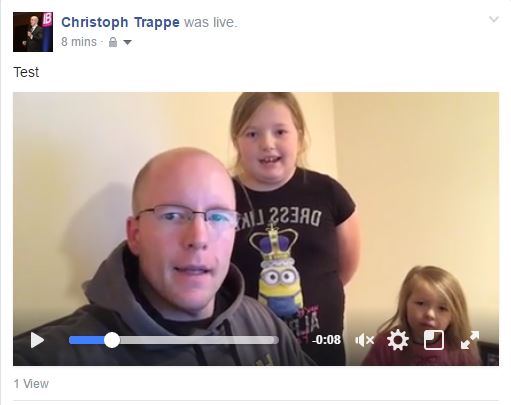 I was doing a Facebook Live from my 9-year-old’s piano performance the other day and was slightly annoyed by the gray bars when I played the video back later on my laptop. Seemed less than perfect to me and I wanted to finally figure out what was causing it.

I was actually made aware of the issue a few months ago, but couldn’t duplicate it at the time. Then I had an iPhone 6 and it was shooting perfectly in a square – no matter how I held the phone. Sideways or up straight it was always showing the video – live and even the replay later as a square box.

Then a few months later, I was doing the Facebook Live of my daughter playing the piano and I was using a new iPhone – a 6S – and when I played it back later on my laptop saw those gray bars. Ugh. How could I could make sure that wouldn’t happen again?

I googled for answers without much luck. I checked the settings. I did some test Facebook Lives trying to figure out how to change it. At one point, I was holding the phone up straight (vertical) during a Facebook Live and turned it sideways (horizontal) to see if that would do the trick. But it just flipped me sideways on the laptop view. Ugh. Not very user friendly at all.

Before I continue, I should mention that this is really only a problem on desktop browsers, but not for mobile Facebook users. So, with 90 percent of daily Facebook users being on mobile it’s really only a problem for the minority of users. Of course, those 10 percent are still a lot of people with Facebook having over 1 billion daily users. (Source: The Next Web) On mobile, there are no gray bars and the video fills the entire screen.

But here’s how you make sure to not have gray bars on Facebook Live:

Don’t hold the phone vertically. Yes, I do it all the time. It’s easier to hold that way and it’s even easier to look at the camera while seeing what’s on the screen at the same time right in front of you – as opposed to the side of the camera when holding it horizontally. But shooting vertically is what causes the gray bars. Simply start the Facebook Live stream while holding the phone sideways (aka horizontal) and the gray bars won’t appear. But the phone needs to be horizontal when the stream starts. That’s the key here. Otherwise it won’t work.  It will look like this:

That’s all there’s to it, but we have to know that before we start going live. There appears to be no way to fix it once we are live for an ongoing stream.

This video also explains the process: