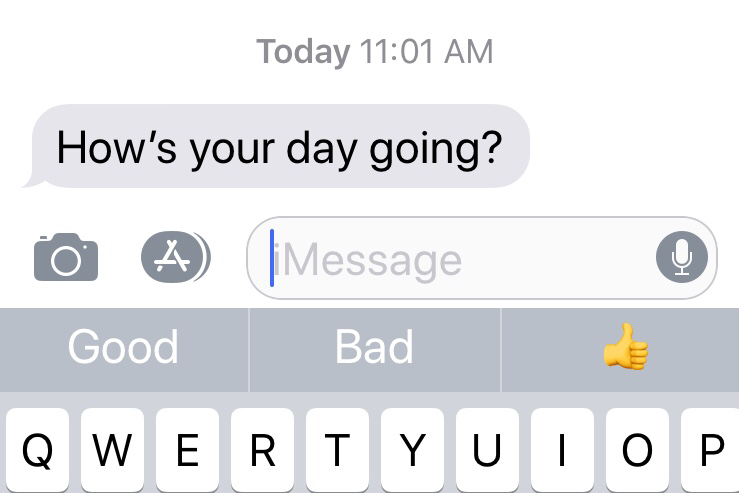 If you use an iPhone or LinkedIn you may have seen the recent onslaught of pre-written suggested responses. For example, in LinkedIn messages, every time somebody messages us we get three options for one-click responses:

In that example, I shared a link and the response was “awesome” and then my suggested responses were “thanks,” “not sure,” or ?.

So not very relevant. Why give a thumbs up to somebody basically just giving you a thumbs up? And then they will get those three options again. It can become an endless game of thumbs up. ?

Another variety on LinkedIn is when somebody gets a new job. Here is a pre-written congratulatory message and they will get dozens of those.

In this example, the suggestions don’t disappear when you send one. How many times do I have to say congrats ??

Another example comes from iMessage:

My wife asked how my day was going and look there are three one-click answers. Very helpful I thought.

And while these technologies aren’t perfect yet as you can see, they are helpful and allow us to respond quickly when it works. And when a response doesn’t work, we can just write one quick! ??

I don’t think it makes us lazy though. Let’s use the example of directions as a comparison.

In the last 1990s, I was covering Midwest NFL teams for a German magazine and drove to stadiums almost weekly from my home base in Iowa. There was no Waze or smartphones. I used an Atlas! Basically a book of maps for my younger readers.

I actually found one a couple years ago and finally recycled it! But not using paper maps or writing down directions doesn’t make us lazy. We are now using Waze or other GPS tools. Yay! They are usually much easier – until you run out of battery, which happened to me in Dallas before. It took forever to find a paper map!

Make use of it in the most efficient way.

Here’s another example: I voice dictate to transcription many of my blog posts. Others I write on my iPhone while riding a bike at the gym – like this one. Not using a desktop computer (I don’t even have one) doesn’t make me lazy. Heck, I crank out more content (some of it even good) than many out there.

While I’m at it: liking people’s social media posts versus commenting is also not lazy. It’s just the response they deemed best. A fully meant like is better than a lame comment! With that I hope technology continues to evolve to make things easier for us professionally and also personally.

And people can decide if technology got there. So far, I think these examples in here are on the right track.

One final note: In business, I’ve used pre-written messages for years. Somebody emails me with one type of request, chances are if it’s a common one I already have a template. Of course, I may slightly have to update and personalize it, but it’s really the same concept. Except we had to copy and paste versus push once.