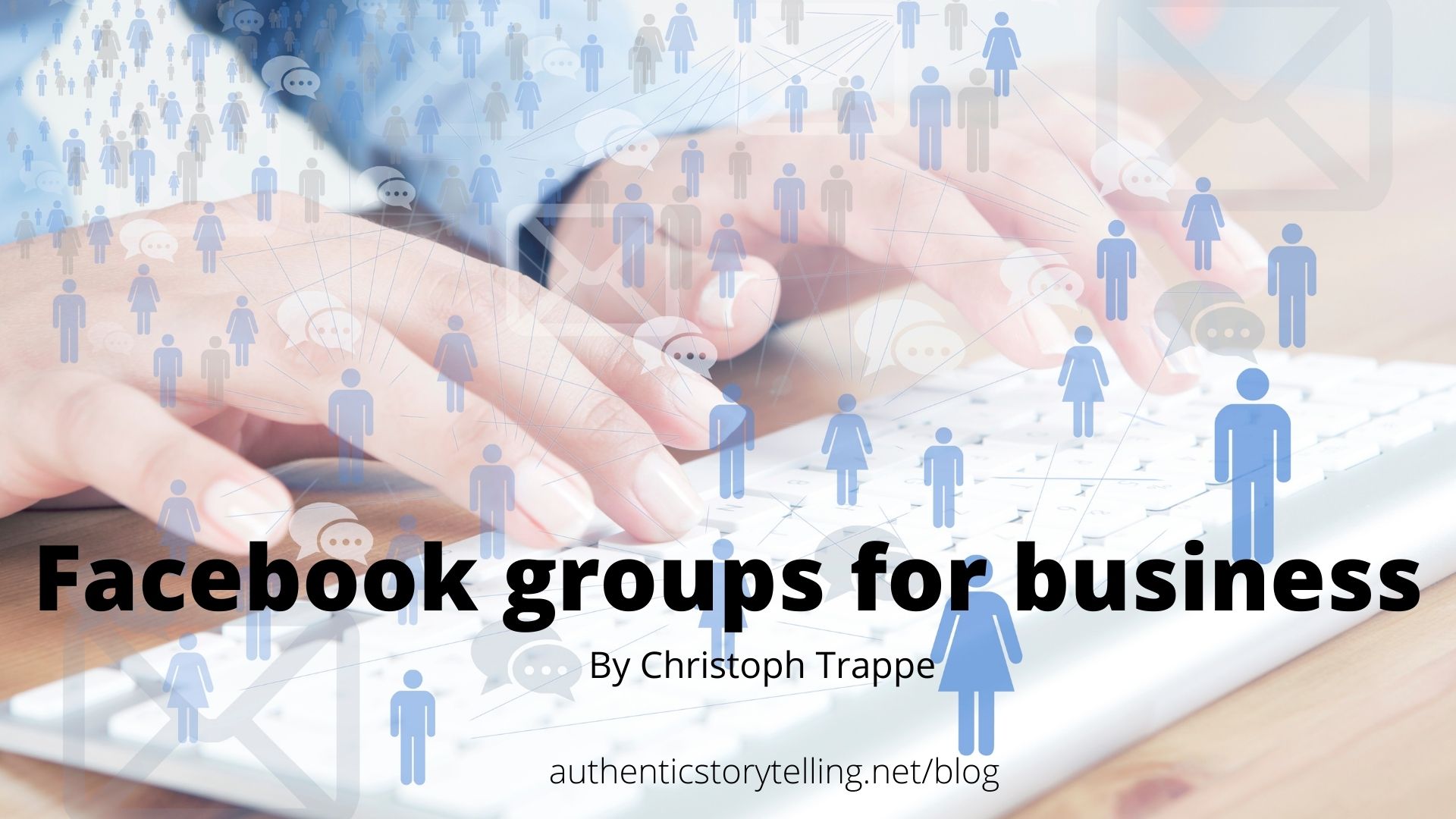 Facebook groups for business have a place in our content and marketing program. There are a number of strategies that you can implement.

Let’s dive into these areas.

Shondell Varcianna, CEO at Varci Media, mentioned this idea on a live recording of the Business Storytelling Podcast: Facebook groups are a treasure trove of information. People air grievances, ask questions and have discussions around the topic at hand. You can learn so much of what’s on people’s minds.

Just listening can be hard when we also want to share value and knowledge and have knowledge to share. But this is a strategy worth considering as you are thinking about Facebook groups for business and whether or not it’s worth pursuing.

A look at the value of running Facebook groups for business. I chatted with Eddie Garrison on the Business Storytelling Podcast in August 2020.

You can also listen to the podcast version below or wherever you listen to podcasts:

What’s  the difference between a Facebook page and a group.

A Group is a closed community of people who were accepted in. Members can be invited or can ask to join and are then approved by a moderator. Once approved they can see and join the group’s discussion.

Over the years, LinkedIn and Facebook groups have left a bad taste in my mouth:

It seemed a hassle and I’ve largely turned off groups on both networks. I haven’t used groups on LinkedIn forever but in 2018 started enjoying them more again on Facebook. Here’s how:

I probably engage with the groups more in my feed than with friend and other page posts.  Maybe that’s a Facebook algorithm thing but the groups’ posts are always there – so probably an algorithm prioritization.

Like many things in digital marketing Facebook groups sound like a good idea, but keep in mind that they take work and you need a good amount of participants.

That of course means that you should promote the group to your network. The larger your relevant audience the higher your chance to get a good discussion going.

You likely want to plan on leading the discussion early on. That takes times and effort and we need to think about the Return on Effort (ROE).

Of course, you’ll have to run an audience growth strategy to invite members and then implement a member engagement strategy, which includes approving members and then engaging with members.

At the end of the day, Eddie and I concluded that creating Facebook groups for business can be a great advantage. You can participate in the discussion, build community and even increase brand affinity.

Need help with your social listening or social media strategy? Contact me now.

Even more thoughts on Facebook groups for business (and LinkedIn groups)

The opinions on Facebook groups as well as LinkedIn groups is divided. Some like them. Even when you like them, there’s a lot of work involved to build your own. And joining one with a ton of members can be a time suck as well. Be cognizant of where to spend your time.

As a consumer, I haven’t used LinkedIn groups myself very much and turned off email notifications for them a long time ago. It was just too much spam and too much chest bumping by members of those groups.

To get us started here: what’s a LinkedIn group anyways? It’s basically an area that forms around a topic, event or brand and then members share content around that area of interest.

In theory, the concept of groups work and I have seen more positive reports when it comes to Facebook groups. Maybe it has something to do with people constantly being on Facebook. I don’t know.

A couple of years ago I gathered some additional thoughts on Twitter on the topic:

“I agree almost all mine have very little traffic and I can’t tell you the last time I checked one.” – said Jonathan Mast on Twitter.

I used to be a member of many groups and maybe I still am but I also don’t check them routinely.

Mike Mathews says that “I’ve got one private group that is moderately active, all others are degenerating daily.”

Mark Hindle responded to my Twitter poll and said that “a group’s success depends upon its management content and frequency. If you measure based upon interactions most will fail. Often group membership is identifiable and hence many will read content and not respond. #conundrum for #Fundraising #IMHO.”

I do often hear people talk about engagement only being engagement when people leave comments. Some people will even argue that liking something isn’t a true form of engagement and is almost lazy. Of course many more people usually read than like and often more people like than comment. And the number of people clicking on links is somewhere in the middle usually on the lower end of the spectrum.

But the measurement depends on your goal! It’s like gym goals: if I want lose weight I shouldn’t go to the gym and do exercises that help me bulk up.

And then I also heard from people who still are seeing growth in their groups.

Mark Walls reported that “I still get 5-10 new members a day. Overall engagement has dropped for sure but have seen some discussions lately with 20-30 contributors which is good.”

So as I mentioned in my first paragraph it all depends. For me personally I have not seen much value in LinkedIn groups. I also haven’t seen much value for the most part in Facebook groups. Part of it is that I don’t need any more notifications than what I’m already getting and both of those areas often send notifications.

I also am the member of other groups that haven’t been updated in years.

Then I’ve been a member of groups that weren’t really conversations between members but between customers and the company (aka administrators).