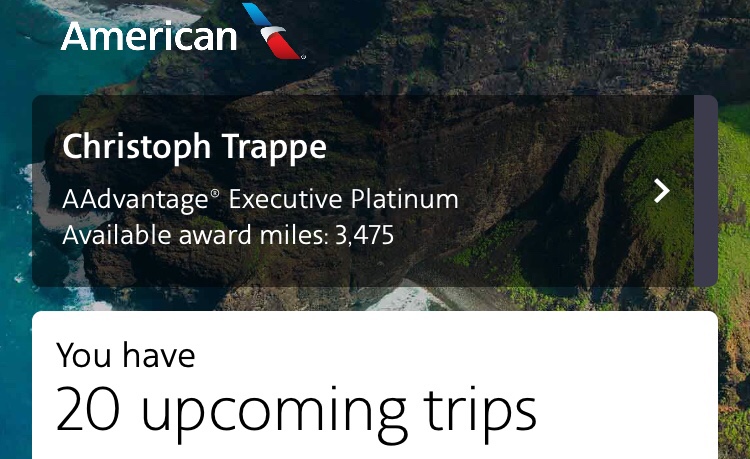 American quietly rolled out the functionality that allows users to add flight info to Siri.

And I say “quietly” because it was showing up way at the end of 20 booked trips of mine in my app.

Chances are not everyone has 20 trips on deck so it might be easier to spot for you. Anyway. Click to add the app to Siri.

Record your phrase to use. Make sure you remember what it is.

“American Airline details” is mine. I tested it and here’s what Siri says:

It’s telling me that I have 20 upcoming trips with the next one on March 16. And then I still have to click.

Maybe that gets more helpful when I get closer to a trip. I’ll test it on March 16 when I’m flying Atlanta to Chicago.

Of course I could just say “Open the American Airlines app <or any app on my phone>.”

And Siri will do that for me. So not sure this use case is quite there yet. But technology evolves.

I also have apps installed on my phone for:

And as far as I can tell only American has this functionality.

Here’s how publishers can use this!!!

I don’t see myself using this often, but I also never thought that I would be blogging from my iPhone. And I do that nonstop now.

Alexa integrations are similar. I don’t really use Alexa devices and it’s still something publishers should do.

And this falls into this category. I don’t know how to add this to an app, but if you have an app, consider adding it to have your readers consume your content that way.

“Siri, read the latest headlines from Christoph’s blog to me.”

I certainly will keep an eye on the AA app when I’m traveling and already use other kind of hidden technology features in the AA app – like the mobile club check-in.

It may be a potential useful way to get audiences engaged with us. Or it may be a complete waste of time and nobody will use it.

The problem is, as always, we won’t know until we try.

Of course, if it costs a ton of money and hours make sure to keep the ROE – Return on Effort – in mind.

One easy way to get people to open your app might be to market to them reminding them that they can tell Siri – or Google, I assume – to open it.

Honestly, I don’t use voice commands that often but have called 911 with Siri from my Apple Watch before.

The watch counts down:

Then I talked to the dispatcher on my watch.