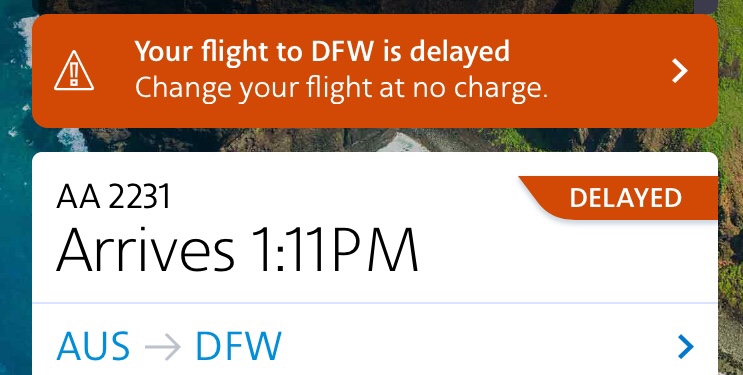 The airlines have the rebooking process down pat in my experience. I’m flying Austin – Dallas – Cedar Rapids and my Austin flight is delayed due to weather, they automagically put me on the next Cedar Rapids flight. Easy enough, but that doesn’t always work in my favor.

As we’ve discussed in this Meetings Today podcast there are many things you can take into your own hands.

Example 1: Rebooking through another 1-hop

I was flying San Francisco – Dallas – Cedar Rapids after a meeting and had to be back in Cedar Rapids the next morning. No problem, until the San Francisco flight was delayed and I missed my connection. So they rebooked me on the next day’s first flight out of Dallas.

That often works but I would miss my presentation. I headed over to Google Flights and looked for another DFW-CID routing.

There was one: A red eye to Chicago, then a 7 am flight to Cedar Rapids. I called to get that changed and made it to my talk. Then went to bed!

Example 2: Rebooking through a 2-hopper

So this means you are changing planes two more times. Not great but sometimes that’s the only option. Agents usually won’t look these up by default because most travelers wouldn’t like that kind of routing.

It wouldn’t be my preferred way but we have to make choices. Agents will look these up for you if you ask, but I find it easiest to do the legwork myself before I call.

I used this method when flying home from Austin after attending the Design Connections conference.

Some stories from the event:

Social justice in the buildings industry

Why are people so unhappy at work?

Here are my steps:

I go to Wikipedia to see all the places American Airlines flies from that airport. For Austin, that map looks like that:

Then, I go to Google Flights and run multi-city flights to see if anything is even bookable.

Then I call and depending on how long the wait is I might also send the airline a direct message on Twitter to get me rebooked.

Given the delays there should be no cost to change!

When it appeared I had no way out of Austin with weather in Dallas I tried to rebook thru LAX, JFK, etc. without luck.

“And I’m not looking at Miami because there’s a hurricane threat there,” the agent told me.

We weren’t finding anything with open seats at all and the flight to Dallas eventually took off four hours later. But that’s my approach that you certainly can use as well. The 160-mile flight to Dallas took forever – you can see why looking at the radar:

In general, delays can easily be used to work. It’s not that big of a deal – unless there are meetings or I’m supposed to give a keynote. (That’s why you always fly in speakers the day before!)

In Austin, I just went to the Admirals Club and worked for the time. I treated it like a layover. Just be sure you don’t miss the flight when it starts boarding early, for example.

The gate agent said she’s call the club when boarding was about to start!

Option 3 – Look for other airline flights

This is absolutely not my preferred way, but many airlines have interline agreements with others and can push passengers to their flights in certain situations.

So American can rebook me on Delta, which I would consider my backup airline, and I looked for options there next through Google Flights.

There was an evening flight on Delta to Minneapolis and also Atlanta and then on to Cedar Rapids.

I was considering that as a final option to get home that day.